Posted in MusicWorld on September 23, 2014 by Malcolm Venable 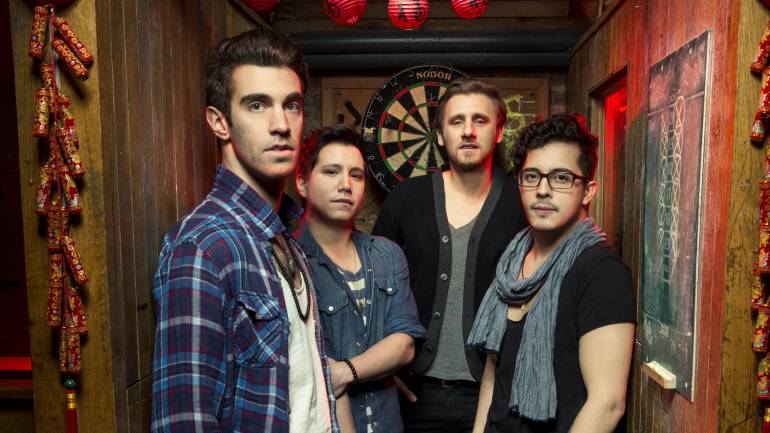 The guys of the alt-rock foursome American Authors didn’t intend on becoming the embodiment of optimism and positive energy with their debut album Oh, What a Life, but as their success demonstrates, great things happen to those who think good things.

Born at Boston’s Berklee College of Music in 2007 as the Blue Pages, the group admits to enduring some trying times as they worked toward success—a path that included dropping out of school and moving into a shared apartment in Brooklyn. Determined to stay hopeful, singer Zac Barnett, guitarist James Adam Shelley, bassist Dave Rublin and drummer Matt Sanchez renamed themselves American Authors and in time found their proverbial groove.

Today, the quartet known for its infectious, pop-infused amalgamation of sounds—from hip-hop to banjo to Latin groove—is touring the world in support of Oh, What a Life, which peaked at No. 3 on Billboard’s Top Rock Albums chart. Two singles, “Believer” and “Best Day of My Life,” have become anthems of sorts, with the double platinum “Best Day” especially having been imprinted in the cultural consciousness through advertising (Lowe’s), film trailers (Delivery Man) television (Glee) and sporting events. While the upbeat tune sounds like the very definition of cheeriness, it’s actually about the commitment to staying hopeful despite tough times. With those days in the rearview mirror, American Authors are now doing exactly what they’d set out to do: make music and have fun. BMI caught up with Matt Sanchez, currently on the road in Australia.

Where does the name American Authors come from?

We’re from all over the United States. I’m from Texas. Zac is from Minnesota, James is from Florida, Matt is from Texas, Dave from New Jersey. We all met in college at Boston, then moved to New York … it’s a combination of all these walks of life from every corner of America. The authors part is because we like to think we tell our stories from our lives.

How do you think being from so many different places has influenced your band’s music?

We all come from different walks of life. We all grew up listening to different things. I grew up playing metal. Dave was into all the Drive-Thru Records stuff. James comes from a blues background. We all studied different things: I studied composition. Dave was doing production and engineering. It’s definitely really influenced our writing styles. I don’t know how it happened for us to come together, but the stars aligned. Zac was president of songwriting club, and I had been playing with Zac in different projects. We needed a bass player; Dave had been hitting Zac up on Facebook stalking him, basically, before it was creepy. And it ended up working out.

You all are famously collaborative - can you talk more about your writing process?

There’s not any one way of describing it - all four of us are writers, and have been writing a long time. Sometimes it can come from one person, a spark in the room. Sometimes it’s two people. There’s really no specific way. In the end it’s very collaborative. Every person has his own stamp on it, even lyrically. We all write lyrics.

Berklee does a really good job at educating people on all that stuff. They gave us the rundown. I had been asking a bunch of people what the differences were. Everybody said BMI was more personable. I made an effort to meet Samantha Cox. She’s still one of my favorite people. People were saying it’s warm and inviting, like a family that really cares about making connections and what you do. She definitely really affirms that. I still keep in contact with her to this day.

You all studied at Berklee. How did studying music at a proper school prepare you?

Berklee is definitely a school where you see people from all walks of life. It’s one of those schools that is going to be what you make it—all the resources are there available to you. One of my favorite professors told me, ‘You learn the rules here, then go out and break them.’ None of us finished, but it was really an amazing time. That was when we as band really learned to play together.

You’ve talked about going from a small apartment to big time success. What was that transition like?

Interestingly, although the apartment situation has changed, it’s still not really different. You’d wake up and hear music coming out of every room. That hasn’t changed much—now we’re just on a tour bus everyday. It’s still inspiring.

Two of your most famous songs “Believer” and “Best Day of My Life” have an inspirational bent. Was it your intent to encourage people?

It was never our intent to write these hopeful songs. We didn’t say, ‘Let’s do something hopeful!’ We were at the lowest point. We didn’t have much going on. We had been a band for six years. Things didn’t look that amazing—it was kind of a reaction to everything that was happening. Also at the time there were all these crappy things happening: school shootings, Hurricane Sandy … it was kind of a reaction to our surroundings at the time. “Best Day” is about escaping. If you really listen, it’s about being in this rundown place, making this conscious decision to escape. That’s what that’s about. “Believer” is about the inner struggle. When you listen to those lyrics, you’re talking about not necessarily negative things, but, ‘I’m scared, I’m going through these things.’ You say, ‘All this is (bad) but it’s going to get better.’

Focus on lyrics. That is the most important thing. Honestly, write every day even if you’re not in front of your instrument. Be always thinking and open to what the world is giving. When I’m walking down the street, I’m thinking about lyrics and melody.

Can you talk about the direction of your next work? What would you all like to experiment with musically?

Technically, we’re always writing. That’s one thing we always keep in mind. As far as the direction of the next album, I don’t think it’ll be much different. In terms of production we haven’t thought that far ahead. We’re really telling our stories about our experience. I don’t think that much would change. A lot of things have changed in our lives—it’ll be interesting to see the reaction to all of that. We still have struggles and odds to beat, and we’re going to react to that. That’s just what we do as writers. As far as experimentation, that (debut album) was the fist time we let go and experimented. The banjo wasn’t something we consciously decided to use—James found it and it made it into 90 percent of album. We’ll keep experimenting with instruments and ways to incorporate them.

What’s next for the group?

We’re here in Australia, and then coming back to do the Honda Civic Tour: headlining it in October and November. We’ve got more shows in Europe; coming back to do radio performance shows and in the beginning of the year, we plan to tour Mexico and get back out, see the rest of world. Then we start working on a lot more music, with studio time in January. We’re so excited.

Bonus Question! What would people be surprised to know about you or about the band?

Oh gosh, I don’t know. Individually, we’re all pretty different in terms of experience. Zac loves to surf. James climbs mountains. Dave is the epitome of the best friend you always want to have. And here’s a random fact: I don’t know how to ride a bike.