Posted in MusicWorld on April 30, 2012 by Ted Drozdowski 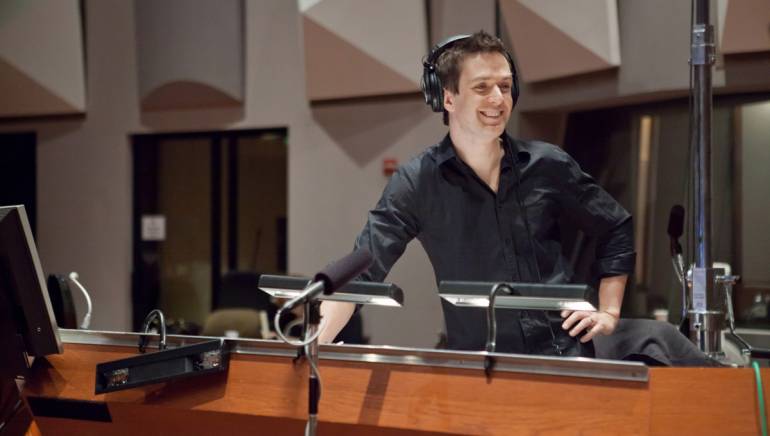 Critics and fans love the TV mystery series Revenge. At least 10.3-million tuned in for the premiere and have watched its anti-heroine Emily Thorne try to unravel the mysteries of her past and exact the titular vengeance on those responsible. An important part of captivating those fans — and the critics — is the work of the composer iZLER, whose often-stunning textural compositions for electric guitar, guitar-viola and a 30-piece string orchestra help spin the show’s elaborate storyline. His latest movie soundtrack arrived April 24 when the Sundance premiered On the Ice was digitally released, and his music for Natural Selection won the Best Soundtrack award at the 2011 South-By-Southwest Film Festival. The 38-year-old composer and multi-instrumentalist’s story began in Prague, Czechoslovakia, where his grandmother — who, at age 96, still works as a music therapist — taught him to improvise on the piano when he was kindergarten age. It continued when his family escaped the yolk of communism and moved to South London, where his dad bought iZLER’s first guitar.

1. It’s interesting that you started your career as a touring rock musician, verses the traditional route of a composer.
From early on I liked the idea of putting music to film, but my first big break was with Robbie Williams. As a kid, all I wanted to do was be a Beatle, so I played in a bunch of bands and toured at every level from sleeping on top of my gear in the van to the opposite end of that with Robbie. I was 22 when Robbie’s music director saw me playing bass — I was just filling in on a gig — and he hired me for that, and I spent the next six years on a tour bus. Halfway through my tenure with Robbie I was able to switch to guitar. On his albums, I played guitar, bass and even drums.

2. I hear the music for Revenge as straddling the worlds of ambient music and alternative rock. Were you influenced by Brian Eno, Mark Isham…?
Eno, for sure. I don’t know anyone in my world who wasn’t influenced by Eno. He was a trailblazer for everybody.

The Revenge score came about because of a long conversation with [series creators] Mike Kelley and Phillip Noyce, about what the score should be and what it should do. I wanted the score to have an old-fashioned composed sensibility to it, and I think I was as influenced by ’30 and ’40s thrillers — [Hitchcock and science fiction film composer] Bernard Herrmann is an absolute hero to me. I think I was as much influenced by him as by Nine Inch Nails. If you listen to a lot of film noir and Hitchcock film soundtracks, even from the pre-Psycho era, they’re just brilliant.

3. And you have the rare pleasure of recording with a live orchestra for television.
I feel incredibly lucky. To do that on a weekly basis for a TV show is pretty rare. I credit ABC for that. They believed in what I envisioned musically enough to really support using live players. To me, film music is about real musicians connecting, and the emotional weight of that comes across in the film.

4. What’s the most important element of film music?
Melody. The mood and the texture come with the melody for me. The first thing whether I’m writing for a film or pop music is always the melody. When Mike and Phillip and I were talking, it was decided that I had to write ‘the mother of all melodies.’ This was at about 9 p.m., and Phillip said, “So we can have it tomorrow morning, right?” I said, “What?!!!” God, I’d usually write two minutes of music a day, although I didn’t tell him that. And he said, “Yeah, yeah, tomorrow.” So I went home and the next day had the theme and about 10 minutes of the first cut. He scared me into doing it.

5. What led you to the gig?
My agents at Evolution Music Partners. Getting me into the meeting with Mike and Phillip was one of the first things they did. I’d just come off winning Best Soundtrack at the South-By-Southwest film festival for a movie called Natural Selection. And I had a few other films in festivals that year, so that put me in the heads of a bunch of people. They got me into a meeting with Mike and Phillip, which was really filled with much bigger composers than myself. I think they hired me because of a single cue I played them that I’d written for free for a friend’s film a couple years earlier. That’s a testament to doing projects you love even if it means not making money, and to do something every time that represents your own music.

6. How is composing for film and TV different than writing popular music for you?
What I bring to it from writing pop songs is a very strong sense of simple melody. The one thing you hope is going to stick in people’s heads is that end title music they hear as they’re leaving the theater. And a long, complex melody isn’t necessarily something that people are willing to deal with while watching a film. A simple melody will draw people in, but not distract them from what’s happening on the screen. The difference with film is it’s very linear. Film music has to take you somewhere. If you use an A/B, A/B form, it’s just going to go in circles and conflict with what’s happening on screen.

7. How important was participating in the Sundance Film Composers lab for you?
At a certain point I was hustling trying to figure out how to get into the soundtrack business. I spotted an application for the lab on line and applied, and was shocked to get a call. So that’s where I spent the summer of 2007, and it was a life-changing experience. It’s real world. You’re working with filmmakers and producers who bring their films into the lab, and you just live and breathe film. This is the place where people discover whether they really want to be film composers. It’s all very well as an abstract concept, but when you get there and realize the work involved…You have no life other than what you’re composing. And it’s also about your ability to collaborate with other people. You’re no longer working in a vacuum.

8. Why did you choose BMI?
At the time of the Sundance lab I was still with PRS in the U.K. and wanted to transfer my stuff over from England to the States. At the lab I met [BMI VP of Film/TV Relations] Doreen Ringer Ross and [former BMI Senior Director of Film/TV Relations] Linda Livingston, who were very encouraging and got me into BMI’s conducting school. I thought, “These folks actually care about what I’m doing. BMI is the place for me.”

If I have to pick just one it’s going to be something obvious like The Godfather or Taxi Driver or Goodfellas. I favor the darker stuff. I recently fell in love with Seven again.

10. You’ve participated as an instructor at the Sundance lab the past few years. What advice would you give to new composers?
One of the best bits of advice I got at school early on was very pessimistic, but also liberating. I had a teacher who said, Look, here’s the reality of the music business. The odds of you making it are minute. If you do, you’re likely to burn out before you reach a ripe old age or even reach your peak. But if you go through all of the challenges and hardships and still want to do this, you’re a musician. Musicians are artists first. You can’t be a film composer until you’re an artist. You have to have a perspective, and if you don’t have that, you’re not really much use to anybody no matter how good your chops are.