LOS ANGELES, CA, July 27, 2020 – today announced its continued support of the Sundance Institute Film Music and Sound Design Lab 2020 in collaboration with Skywalker Sound. The prestigious program returns with a new reimagined digital format on Sundance Co//ab from July 27–August 14, 2020.
BMI composers Aaron Parks, Ariel Marx and Jeff “Gitty” Gitelman were invited to participate along with Cora (Yi-Huan) Chung, DeAndre Allen-Toole and Sultana Isham to round out this year’s talented group of Fellows.

“We’re proud to continue supporting the Lab’s commitment to fostering new emerging composers because it aligns perfectly with what we do at BMI,” said Doreen Ringer-Ross, Vice President, Creative Relations, BMI. “The program has enhanced the careers of numerous composers who have gone on to become some of the most sought-after talents in the industry, which not only highlights the success of the program, but the importance and value of mentorship.”

Lead by Peter Golub, Director of the Sundance Film Music Program, the Lab brings emerging gifted film composers together with fiction and documentary filmmakers, and sound designers to explore the power of storytelling through score and sound. Composers and filmmakers will have the opportunity to score selections for either a fiction or documentary feature-length film during the two-week program.

Drawing from its support of the Film Music Program, BMI produces a composer/director roundtable each year at the Sundance Film Festival in Park City, Utah, highlighting its composers who have scored films in the prestigious festival. 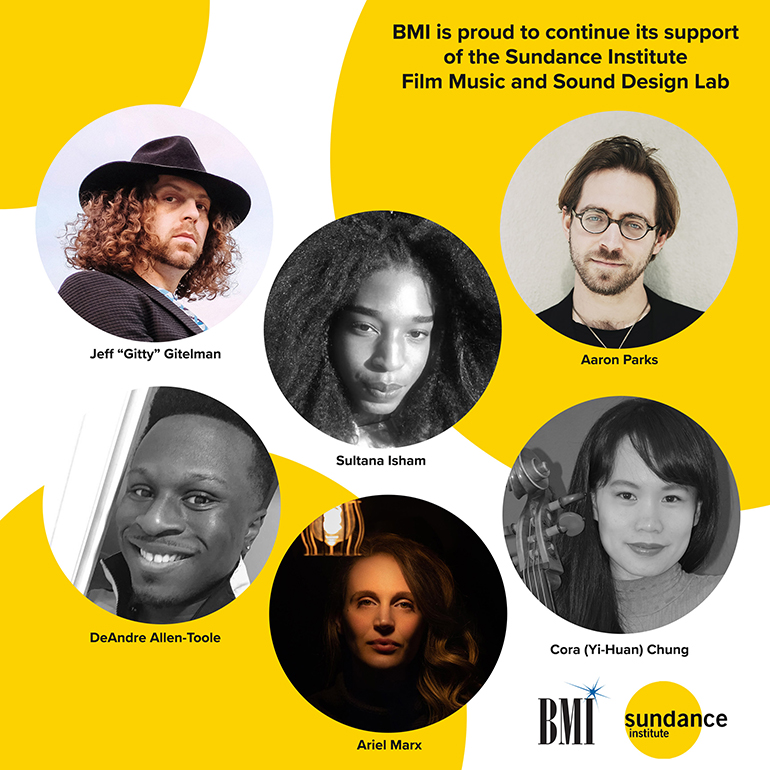 Artists and projects selected for the 2020 Sundance Institute Music and Sound Design Lab are:

Composers:
Aaron Parks attended the Manhattan School of Music at 16 and two years later became the pianist in Terence Blanchard’s band. He won numerous competitions and appeared on Blue Note recordings, including the GRAMMY-winning A Tale of God’s Will (A Requiem for Katrina), before making his own debut with 2008’s Invisible Cinema. The San Jose Mercury News named his Alive in Japan release as their 2013 Top Jazz Album of the year. Parks also appears on soundtracks for Darnell Martin’s acclaimed Their Eyes Were Watching God as well as Spike Lee’s Inside Man, She Hate Me and When the Levees Broke. He continues to tour as the leader of the Aaron Parks Trio, his quartet Little Big (hailed by PopMatters as “what jazz can be in the new century”), as a solo pianist and a member of Terri Lyne Carrington’s Social Science.

Cora (Yi-Huan) Chung is a composer and cellist from Taiwan, she has performed with numerous professional orchestras in Asia, such as Kaohsiung Symphony Orchestra (KSO) and the Asian Youth Orchestra (AYO). Chung graduated from Columbia College in Chicago majoring in Music Composition for the Screen. Her music has been performed and recorded at the Sound of Silent Film Festival in Chicago and 20th Century Fox Studios in 2019. Additionally, the young composer has been nominated for the 2020 Peer Raben Music Award at Soundtrack Cologne.

DeAndre Allen-Toole graduated from Columbia College Chicago with a Bachelor of Arts in Music Composition in 2015 and was later accepted into their graduate program. Allen-Toole was chosen as a Game Audio Network Guild Scholar before earning his Master of Fine Arts degree in 2017 and was later awarded a spot in the Television Academy Foundation’s summer internship program. DeAndre has also interned for composer Mac Quayle and served as a full-time assistant to Theodore Shapiro. Recently, DeAndre has written music for composers Tyler Strickland, Jongnic Bontemps and Michael Abels, while also working on a handful of independent projects. He is a proud member of the Composers Diversity Collective and currently sits on the organization’s executive committee.

Sultana Isham is an award-winning film composer, violinist, writer and scholar based in New Orleans. Isham is an alumna of Syracuse University and Red Bull Music Academy, her film composer credits range from avant-garde, horror, fantasy and archival. She is a member of the contemporary string ensemble, Les Cenelles, and an educator and published scholar on the Black presence in art music through interdisciplinary theory with a psychoanalysis of music, lineage and memory. She was a researcher and the composer for the documentary All Skinfolk Ain’t Kinfolk, directed by Emmy-nominated Angela Tucker. Her upcoming film scores include Sacred directed by Luisa Dantas and The Neutral Ground, her feature film debut on the removal of confederate monuments, directed by CJ Hunt.

ABOUT BMI:
Celebrating over 80 years of service to songwriters, composers, music publishers and businesses, Broadcast Music, Inc.® (BMI®) is a global leader in music rights management, serving as an advocate for the value of music. BMI represents the public performance rights in over 15 million musical works created and owned by more than one million songwriters, composers, and music publishers. The Company negotiates music license agreements and distributes the fees it generates as royalties to its affiliated writers and publishers when their songs are performed in public. In 1939, BMI created a groundbreaking open-door policy becoming the only performing rights organization to welcome and represent the creators of blues, jazz, country, and American roots music. Today, the musical compositions in BMI’s repertoire, from chart toppers to perennial favorites, span all genres of music and are consistently among the most-performed hits of the year. For additional information and the latest BMI news, visit bmi.com, follow us on Twitter @BMI or stay connected through Broadcast Music, Inc.’s Facebook page. Sign up for BMI’s The Weekly™ and receive our e-newsletter every week to stay up to date on all things music.

ABOUT Sundance Institute
As a champion and curator of independent stories for the stage and screen, Sundance Institute provides and preserves the space for artists in film, theatre, film composing, and digital media to create and thrive. Founded in 1981 by Robert Redford, the Institute’s signature Labs, granting, and mentorship programs, dedicated to developing new work, take place throughout the year in the U.S. and internationally. Sundance Co//ab, a digital community platform, brings artists together to learn from each other and Sundance Advisors and connect in a creative space, developing and sharing works in progress. The Sundance Film Festival and other public programs connect audiences and artists to ignite new ideas, discover original voices, and build a community dedicated to independent storytelling. Sundance Institute has supported such projects as Clemency, Never Rarely Sometimes Always, Zola, On The Record, Boys State, The Farewell, Honeyland, One Child Nation, The Souvenir, The Infiltrators, Sorry to Bother You, Won’t You Be My Neighbor?, Hereditary, Call Me By Your Name, Get Out, The Big Sick, Mudbound, Fruitvale Station, City So Real, Top of the Lake, Between the World & Me, Wild Goose Dreams and Fun Home. Join Sundance Institute on Facebook, , Twitter and YouTube.