“Popularized by country act Lonestar and pop artist Duncan James, ‘Amazed’ has achieved a rare status at the top of BMI’s repertoire alongside some of music’s all-time greats, including ‘Sitting on the Dock of the Bay’ and ‘You’ve Lost that Loving Feeling,’“ said BMI’s Assistant Vice President of Writer/Publisher Relations Clay Bradley.

The BMI “Million-Air” Award is given to songwriters, composers, and publishers whose songs accumulate to over one million U.S. broadcast performances.  The designation has been bestowed upon many of BMI’s iconic songwriters, including Sir Paul McCartney, Dolly Parton, Isaac Hayes and Roy Orbison. One million continuous performances of a song of the average length of 3 minutes represents 5.7 years of continuous airplay. The seven million performances of “Amazed” equals nearly 40 years of back-to-back play.

BMI presented the last BMI “Million-Air” Awards in January to rock legend Tommy James honoring the 22 million combined radio performances of his hit songs, “Draggin’ the Line,” “Crimson and Clover,” “Crystal Blue Persuasion,” “Mony Mony,” and “Tighter Tighter.” This is a tremendous achievement that many of the members of BMI have been awarded. The acknowledgement is a mark of respect and praise for the longevity and resilience of their music. 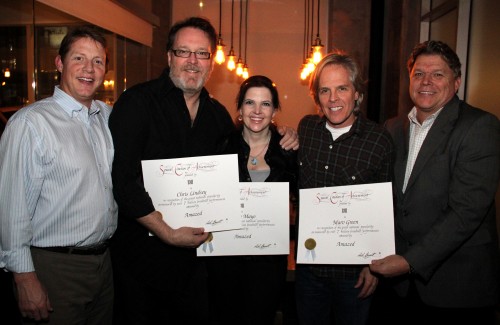 Broadcast Music Inc. (BMI) is a global leader in music rights management, serving as an advocate for the value of music.  BMI represents the public performance rights in more than 7.5 million musical works created and owned by more than 550,000 songwriters, composers, and music publishers.  The Company negotiates music license agreements and distributes the fees it generates as royalties to its affiliated writers and publishers when their songs are performed in public. In 1939, BMI created a groundbreaking open-door policy becoming the only performing rights organization to welcome and represent the creators of blues, jazz, country, and American roots music. Today, the musical compositions in BMI’s repertoire, from chart toppers to perennial favorites span all genres of music and are consistently among the most-performed hits of the year. For additional information and the latest BMI news, visit bmi.com, follow us on Twitter @BMI or stay connected through Broadcast Music Inc. (BMI) Facebook page.