LONDON, October 16, 2012 – Broadcast Music, Inc. (BMI), the leading global music rights organization, presented Sir Paul McCartney with a BMI Million-Air Award to honor over 4 million U.S. broadcast performances of his James Bond film song, “Live and Let Die.” The designation has been bestowed on many of BMI’s iconic songwriters, including Dolly Parton, Isaac Hayes and Roy Orbison. Sir Paul McCartney has received a staggering 75 BMI Million-Air Awards throughout his career, including one for achieving 5 million U.S. plays for The Beatles’ “Yesterday” in 1988, which now surpasses an awe-inspiring 9 million count. 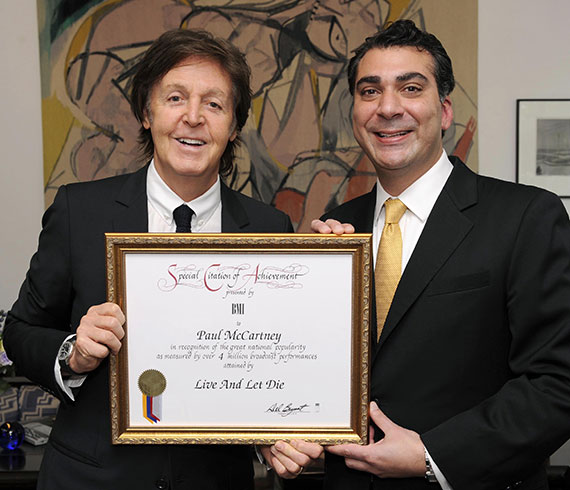 Broadcast Music, Inc.® (BMI®), a global leader in music rights management, is an American performing rights organization that represents more than 550,000 songwriters, composers and music publishers in all genres of music and more than 7.5 million musical works. BMI has represented the most popular and beloved music from around the world for more than 70 years. The company provides licenses for businesses that perform music, and distributes the fees it generates as royalties to the musical creators and copyright owners it represents. Find out more at http://www.bmi.com, follow @BMI on Twitter and stay connected through Facebook.