10 Things You Should Know About the Key West Songwriters Festival 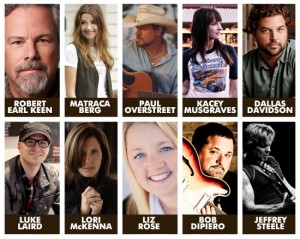 The 2012 Key West Songwriters Festival is just around the corner. Whether you’ve booked your trip and are counting down the days, or you’re deciding whether or not to head to the festival for the first time, here are 10 things you should know:

1. The Key West Songwriters Festival is May 2-6, 2012. This year marks the beloved fest’s 17th anniversary.

2. Loved by the greatest songwriters in the world, the festival allows attendees to experience amazing songs in their purest original form in fun-loving Key West, where the Gulf of Mexico and the Atlantic meet at the continental U.S.’s southernmost point.

3. Shows are held at venues throughout the island. A foodie’s delight, Key West offers international fare and local delicacies at hotspots all a short walk, bicycle or scooter ride away from one another.

4. Most of the stacked schedule is free, including more than 30 in-the-round sets from top performing songwriters. Tickets for a handful of intimate theatre shows are on sale athttp://www.keystix.com”> www.keystix.com.

5. Proceeds will benefit Operation Homefront, a national nonprofit that provides emergency financial and other assistance to the families of our service members and wounded veterans.

7. The 2012 lineup is bigger than ever, from Robert Earl Keen, Patrice Pike, Billy Burnette and Matraca Berg, to 2012 ACM Songwriter of the Year Dallas Davidson and chart-topping writer Luke Laird, the World Famous Headliners – Al Anderson, Pat McLaughlin and Shawn Camp – and the Jeffrey Steele Band.

8. Jeffrey Steele – a charismatic live performer and the award-winning writer behind smashes including Rascal Flatts’ “What Hurts the Most,” Montgomery Gentry’s “Hell Yeah,” Tim McGraw’s “The Cowboy in Me” – will perform with his ace band on Duval Street. The show is free and open to the public.

9. Songwriter Drew Reid first suggested a songwriter festival in Key West, and then Charlie Baur – who had moved to the island in 1988 to open the Hog’s Breath Saloon – jumped at the idea. The event’s 1995 debut was small but memorable, featuring Mickey Newbury and Shel Silverstein. BMI first stepped in as a partner and sponsor the following year.

10. Make your reservations now – hotels and bed and breakfasts on the island are filling up fast. For a list of sponsoring hotels and suggestions of where to stay, visit www.keywestsongwritersfestival.com.