Save the Date: Feb. 11 at Key Club in Los Angeles

WHO: Grammy-winning hip-hop icon Rev Run, multiple Grammy nominee/producer/artist and official voice of South Florida DJ Khaled, and Grammy-winning songwriter/producer RedOne are confirmed as panelists at BMI’s “How I Wrote That Song” 2012; more hit makers will be announced soon.

BMI’s “How I Wrote That Song” is open to members of the public, ages 18 years old and up. Tickets are $15 in advance, $20 day-of the panel. Tickets can be purchased at http://www.keyclub.com/.

WHERE: The Key Club (9039 West Sunset Boulevard, West Hollywood, CA 90069). Public parking is located across the street. Media van parking will be held with prior clearance and notice.

Rev Run
Rev Run is one of the most iconic figures in music. The front man of seminal hip-hop group Run-D.M.C., Rev has sold tens of millions of records worldwide and is widely credited for ushering rap music into mainstream culture. An inductee of the Rock & Roll Hall of Fame, Run-D.M.C. was named the greatest hip-hop artist of all-time by both MTV and VH1. Run remains a dynamic figure in entertainment today. His hit MTV show, Run’s House, aired for six seasons and became one of the most widely viewed shows on cable television. Recently, Run has become a highly sought-after deejay and public speaker. Run’s daily inspirational words of wisdom are followed by nearly 3,000,000 people on Twitter and have established him as a thought leader in the world of social media.
http://twitter.com/#!/RevRunWisdom

DJ Khaled
DJ Khaled is the deejay for one of Miami’s most notable radio stations, 99 Jamz. Paired up with K-Foxx, DJ Khaled currently has the #1 rated radio show in South Florida. Over a decade on the radio has inspired Khaled to develop his own sound of music. The versatile deejay has produced tracks for artists such as Trick Daddy, Pitbull, Young Jeezy, and his Terror Squad brother Fat Joe. In February 2008, Khaled launched his new label, We The Best Music, under Def Jam Records. Later that year, Khaled was appointed President of Def Jam South. Under his watch, we have seen albums released from Rick Ross, Young Jeezy, Ludacris, Ace Hood and Triple C’s. Khaled is currently signed to Young Money Cash Money as an artist.
www.djkhaled.org

RedOne
Multiple Grammy-winning RedOne has become one of the most successful and sought after producers and songwriters in the world. He has earned more than 35 international hit singles in the past three years, including 18 No. 1s. RedOne won a Grammy in 2010 for “Poker Face” with Lady Gaga off of The Fame album, which RedOne produced. He also co-wrote seven of the album’s tracks, including five back-to-back hit singles. RedOne garnered Grammy gold again in 2011 for his production on Lady Gaga’s The Fame Monster. He’s up for yet another Grammy this year for Lady Gaga’s Born This Way, which features several tracks he also produced. Named BMI Songwriter of the Year in 2010, RedOne was also Billboard’s Producer of Year and #1 Songwriter. In addition to Gaga, RedOne has collaborated with Enrique Iglesias (“I Like It,” featuring Pitbull, and “Dirty Dancer”), Usher (“More”), Midnight Red (“One Club at a Time”), Pitbull (“Rain Over Me,” featuring Marc Anthony) and Jennifer Lopez, with whom RedOne crafted the career-surging single “On the Floor” and led as Executive Producer on her album Love?
www.redoneprod.com 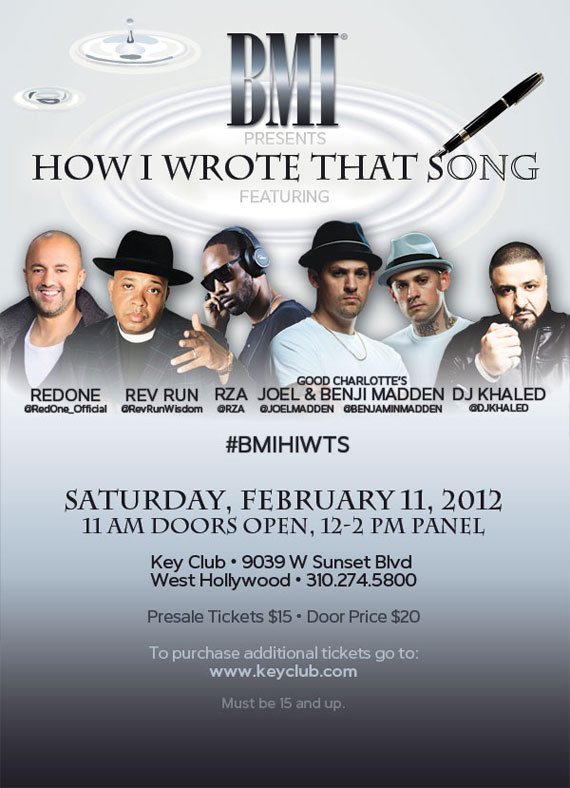 PRESS CREDENTIALS: Cleared press will be allowed in venue media room for interviews. There will be no red-carpet outside; it will be indoors. We will try to accommodate live shots for television with advance notice. One-on-one interview requests must be given in advance. Still photographers on assignment will be permitted to shoot panel and performances.