Teen Pop Duo t. A. T. u. Scores College Song of the Year

LONDON, October 5, 2004 – BMI, the American performing rights organization, tonight saluted the top European songwriters and publishers in the pop, country, dance, Latin, college and film/TV music genres at its 2004 London Awards. The gala dinner and awards ceremony, which honored the most performed songs on US radio and television written by members of its foreign sister societies, was hosted by BMI President & CEO Del Bryant along with President Emeritus Frances Preston and Senior Vice President Phil Graham. The invitation-only event was held in the Ballroom of London’s Dorchester Hotel.

“Forever And For Always,” written and recorded by multiple BMI Award-winning artist Shania Twain (PRS), was named Song of the Year and received the organization’s highest accolade, the Robert S. Musel Award. This prestigious award is named for the late Robert Musel, BMI’s long-time UK consultant. “Forever,” from Shania’s 10-times platinum CD UP!, is her third Song of the Year win; her mega-hit “You’re Still The One” earned her the title at both the 1999 BMI Pop and Country Awards. She was also named BMI Songwriter of the Year at both the 1999 and 2000 Pop and Country Awards and now owns a total of 26 BMI Awards.

Another highlight of the gala evening was a special tribute to legendary songwriter and recording artist Van Morrison, who was honored as a BMI ICON for his “enduring influence on generations of music makers.” The Irish rocker joins a distinguished list of honorees that includes Al Green, Brian Wilson, Isaac Hayes and Dolly Parton, among others. With a prolific career that spans nearly 40 years, Morrison has penned such classics as “Brown-Eyed Girl,” “Gloria,” “Domino” and “Moondance,” and is considered one of pop music’s true innovators.

Million-Air certificates were presented throughout the evening in recognition of the songs that have had two million or more US radio and television performances (two million spins is the equivalent of more than 11.4 years of continuous airplay). Several classics written by the late John Lennon (PRS) achieved multi-Million-Air status including the timeless Beatles song “Yesterday,” which

Who guitarist Pete Townshend (PRS) received a BMI Pop Award for “Behind Blue Eyes,” as well as two TV Music Awards for CSI: Crime Scene Investigation and CSI: Miami. Sting (PRS) picked up a pair of BMI Awards, including a three million performance certificate for “Fields of Gold” and a Pop Award for “Send Your Love,” both published by EMI Music Publishing Ltd./Steerpike Ltd. (PRS). The Lasgo hit “Something,” written by Peter Luts (SABAM) and David Vervoort (SABAM), and published by A and S Productions (SABAM) and BE’s Songs NV (SABAM), received both a Pop Award and a Dance Award.

Other winners included a Pop Award to Anders Bagge (STIM), Darryl Hall and EMI Music Publishing Scandinavia AB (STIM) for the Celine Dion song “Have You Ever Been In Love,” a Christian Music Award to Chris Eaton (PRS) for “My Heart Goes Out,” and a BMI Latin Award to José Alfonso Lorca Gomez (SGAE) and Universal Music Publishing S A (SGAE) for the Elvis Crespo hit “Bésame En La Boca.”

For a complete list of 2004 BMI London Awards winners, please visit bmi.com/london. High-resolution photos from the event will be available to registered users only at press.bmi.com. To request access, please contact .(JavaScript must be enabled to view this email address).

Founded in 1939, BMI is an American performing rights organization that represents more than 300,000 songwriters, composers, and music publishers in all genres of music. Through its music performance and reciprocal agreements with sister organizations around the world, it grants businesses and media access to its repertoire of approximately 4.5 million musical works. 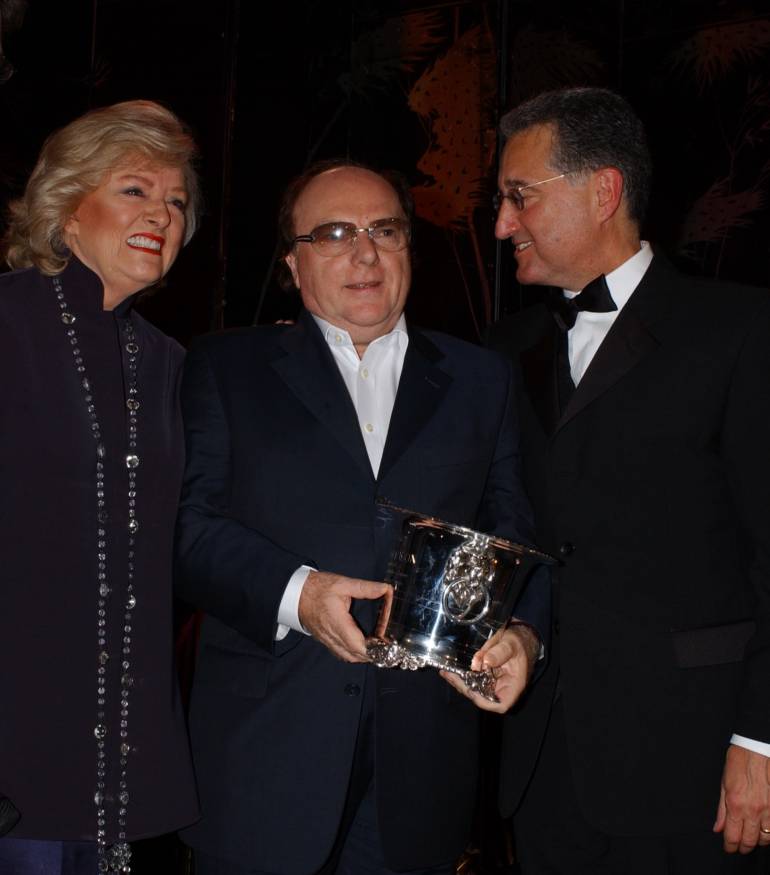 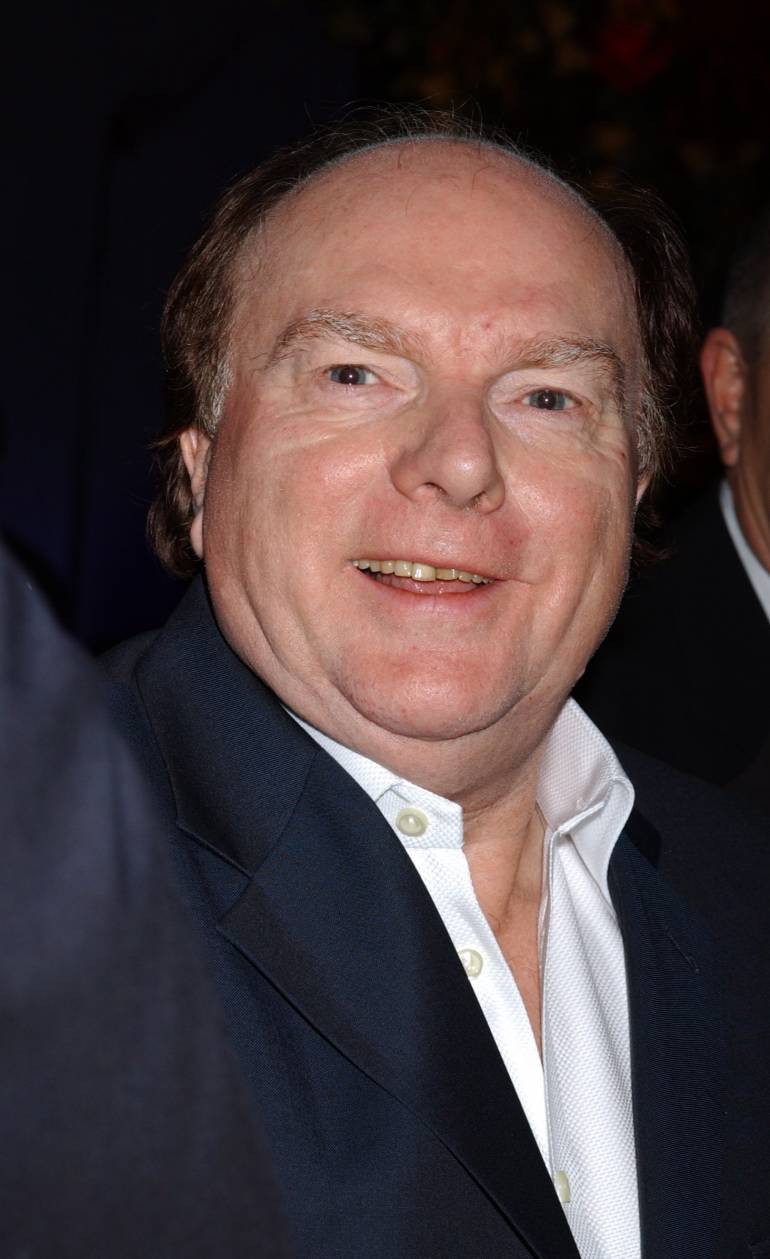 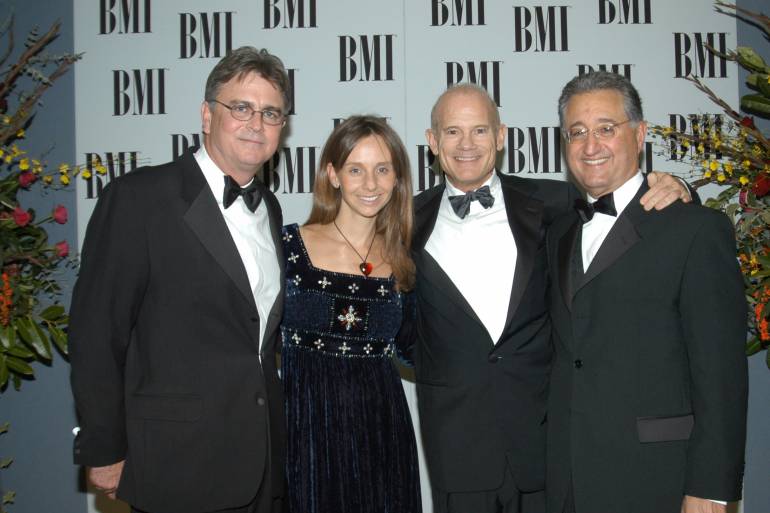 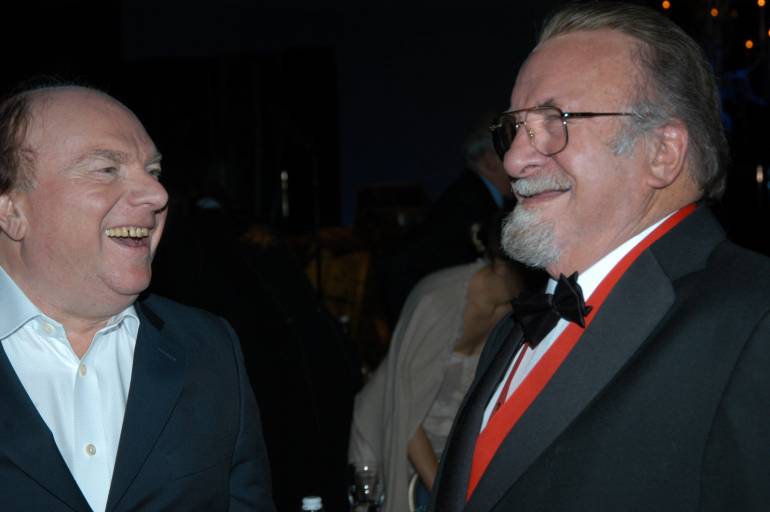 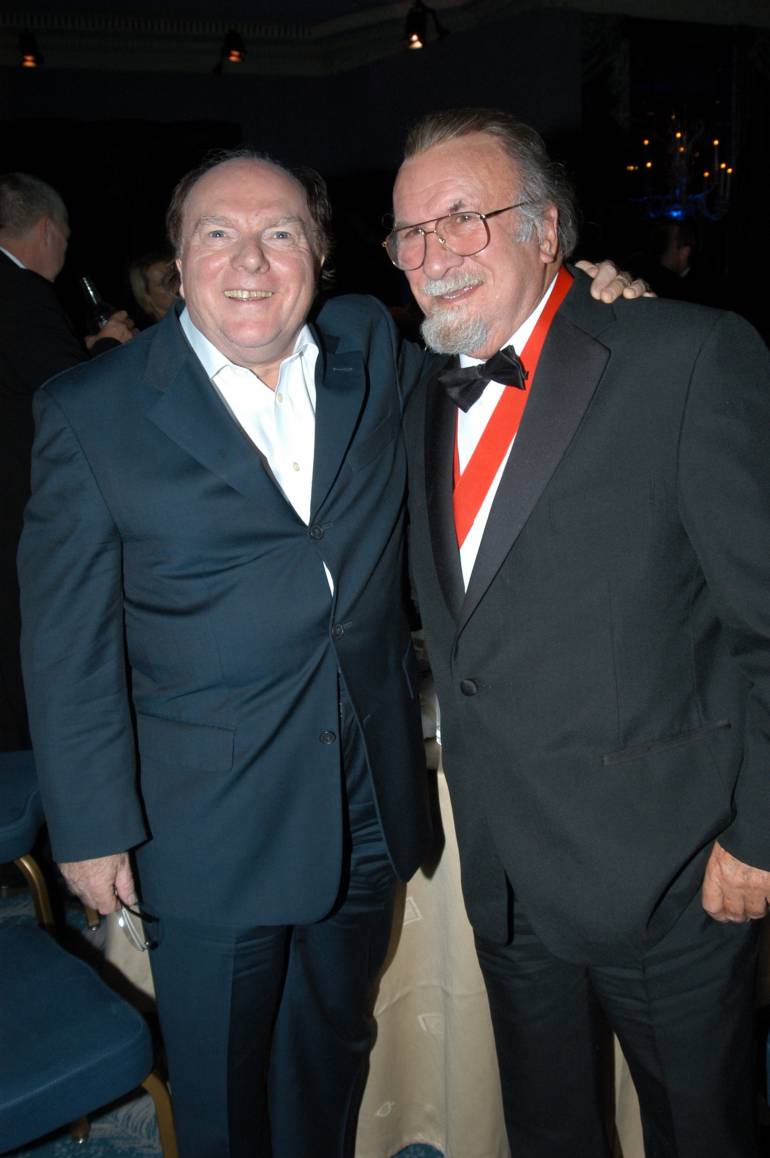 Legendary songwriter/artist Van Morrison, who received the evening's top honor as the BMI ICON, chats with BMI songwriter Acker Bilk, who received a standing ovation for his timeless composition 'Stranger on the Shore,' which was honored with a 4 Million Performance Award. 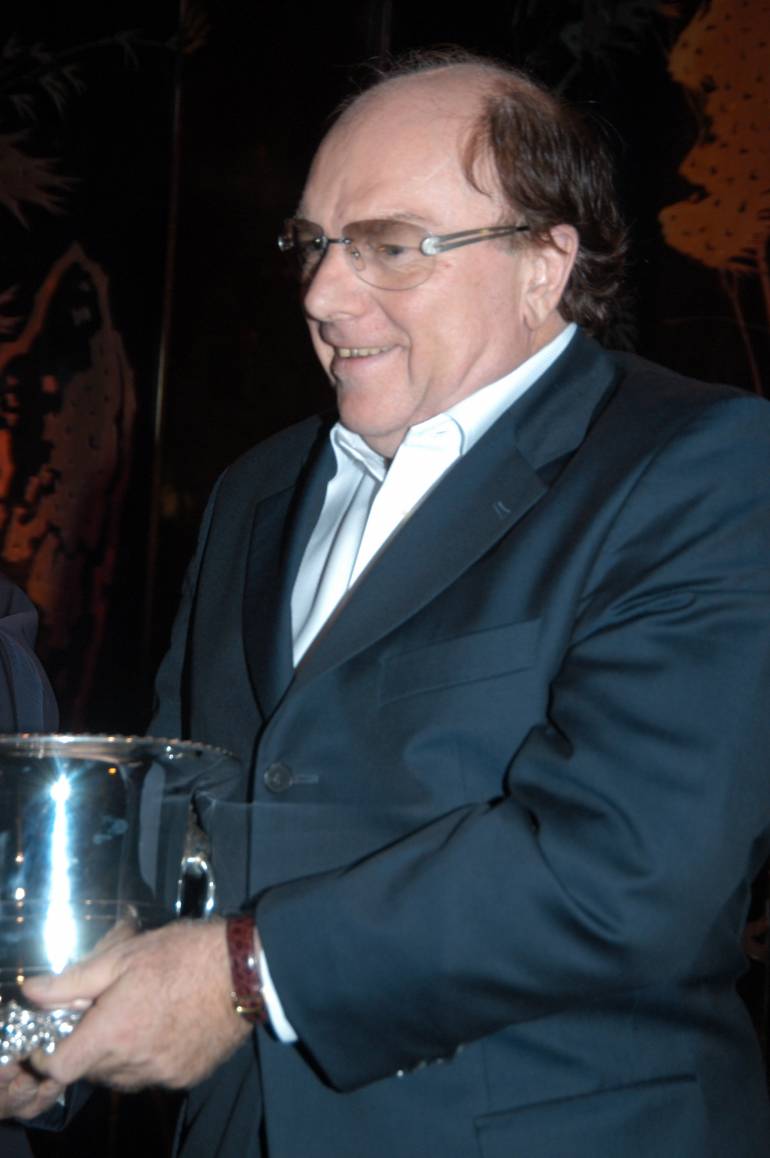 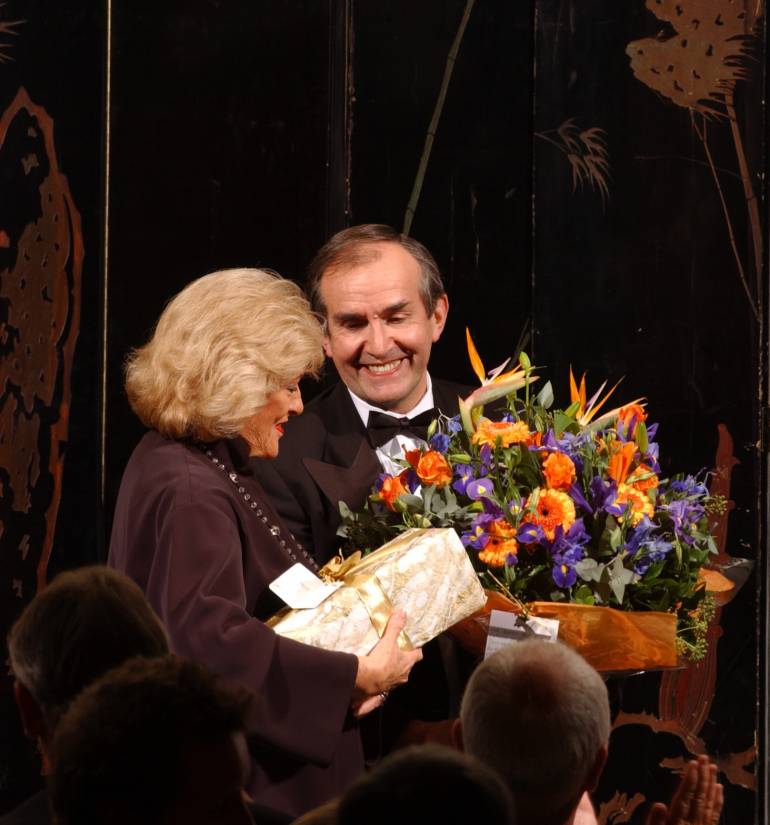 PRS Chief Executive John Hutchinson took the stage at the awards ceremony to present a special tribute to BMI President Emeritus Frances Preston, saluting her 18 years as BMI President and CEO and 'one of the most important defenders of copyright in our industry today.' Preston stepped down as President last month and will now focus on representing BMI in the international copyright community. 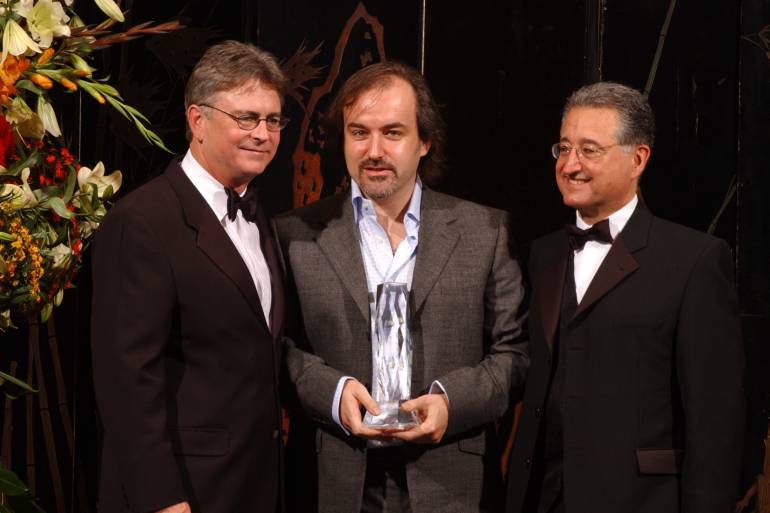