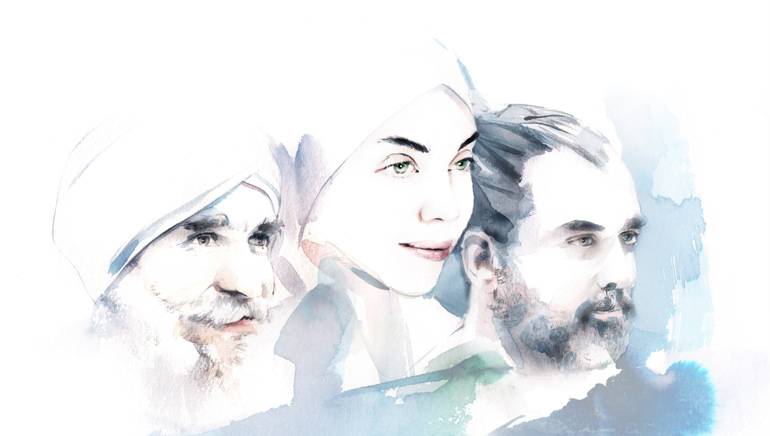 Following their GRAMMY-winning second album, new age music creators White Sun are basking in the glow of their third release, White Sun III, and deservedly so. The pioneering band, which consists of Gurujas Khalsa, Adam Berry and Harijiwan Khalsa, recently let their new music spin for 100 eager listeners at BMI’s LA office before the release of their double album on September 28. Not surprisingly, the crowd was spellbound. It’s no wonder White Sun’s mesmerizing music, which took the GRAMMY for Best New Age Album, has topped the charts for Billboard, Amazon and iTunes, while amassing 20 million streams across six continents.

After the successful pre-launch, BMI posed a few questions to singer and principal songwriter Gurujas Khalsa, producer, orchestrator and instrumentalist Adam Berry, and founder and percussionist Harijiwan Khalsa. Here’s what they had to say about the new album, their inspiration and what advice they’d give to aspiring new age composers.

Where do you get your musical ideas from and what inspires you?

I am, of course, inspired by great composers and music-makers both past and present. I also receive a lot of inspiration from visual art. Maybe that’s a result of scoring to picture for over 20 years, but I’ve always seen images when I hear music, and vice-versa. In terms of where the ideas come from, when something feels truly inspired, it feels like it’s coming from somewhere outside of me. I listen as deeply as possible and do my best to bring that idea into the world.

Harijiwan, as founder of White Sun, what were you looking to create with this band and this music?

50 years ago we heard songs about the dawning of the Age of Aquarius. The Sun has risen; the age has arrived. A New Age. White Sun sings the songs of yogis. We have left Heartbreak Hotel and now sing songs of love found, love all around, the sound of resound—the ancient yogic technique of setting the psyche on the orbit of happiness, fulfillment, enjoyment and success.

In many ways, White Sun III is a departure from your earlier work. Why did you decide to create this album?

I just think it’s the right time to do something different. Not just for our growth as a band, but for the time and space that we are living in as a collective. Music in general is healing. It is a refuge for people. Since time immemorial, humanity has expressed itself through music. Yet as a collective there is a crossroads we are facing right now. On the one hand, people are moving toward acceptance, wellness, and positivity. On the other hand, they are moving toward fear, exclusion, and instability. We very consciously set out to create music that will heal, empower, restore, and strengthen. We want our songs to do some good for the planet.

Can you speak about the composition and instrumentation on White Sun III?

Our objective was to make good songs that vibrate at a high frequency. What resulted is a musical landscape that is fairly complex. The album combines driving, passionate tempos with ambient songs that are at times almost structure-less. There are songs that are written like a traditional pop song, with an intro, verse, chorus, bridge and outro. And then there are songs that sound completely experimental, and don’t seem to follow any structure at all. The orchestrations are lush and spacious, with a sonic arena that is at times very dense. All the songs keep to a tight two to six minute song structure. To give a couple examples, “Ram Ram” is uplifting dream pop, with a semi-traditional construction and a moderate tempo. The track’s overall feel is smooth and driving. That song is a dramatic contrast to the introspective and passionate “Ong Sohung”—a fluid, etheric ballad with dramatic, breathy vocals over slow, layered synth.

Who are your collaborators on this album?

Outside of the three of us, we have been extremely fortunate to work with musicians that are not only some of the greatest talents in the world, but who are wonderful people that I admire deeply on a personal level. It is difficult to find the right people to work with, but years of searching have paid off. Mamadou Diabaté is a GRAMMY-winning kora player, who can trace his musical ancestry back 70 generations. His playing has left me in tears. Gabe Witcher of the Punch Brothers is a nine-time GRAMMY-nominated fiddle player whose talent is just sort of off the charts. Abhiman Kaushal’s tabla playing is masterful and full of joy. He has wonderful stories from touring days spent with Ravi Shankar and George Harrison. Mrdunga and dholak percussionist Arjuna O’Neal is one of the most exuberant live players I have ever shared a stage with, and he has been with us since day one. White Sun III also features percussionist Brendan Buckley (Shakira, Miley Cyrus, DMX), and guitarist Mike Fonte (film soundtrack musician). I am so grateful to work with each and every one of these musicians, and feel very fortunate to call them friends.

What is your advice for composers starting out today in the New Age genre?

My first piece of advice is to find artistic partners like Harijiwan and Gurujas whose connection to the unseen mystical is far greater than your own. Once that’s accomplished… create music that empowers people and makes their daily experience of life better.

Beyond that, my advice is the same as it is for a composer in any genre. Get good! Improve your skill-set regardless of where you are at now. Be better tomorrow than you are today, keep learning and evolving as an artist, and be open to new creative opportunities.

BMI offers an incredible support system. Unlike many other creative professions, composers do not have a union that looks after their best interests. BMI looks after our best interests, and I’m very grateful for that. Their support, encouragement and guidance have been invaluable. I’ve been with BMI for over 20 years and look forward to at least another 20.

Share a memory from the making of White Sun III?

Gabe gave me a fiddle lesson in the studio one day! I’m a prodigy, of course (I can barely play). It was amazing to hold his fiddle and bow, and get to experience the vibration of his instrument.