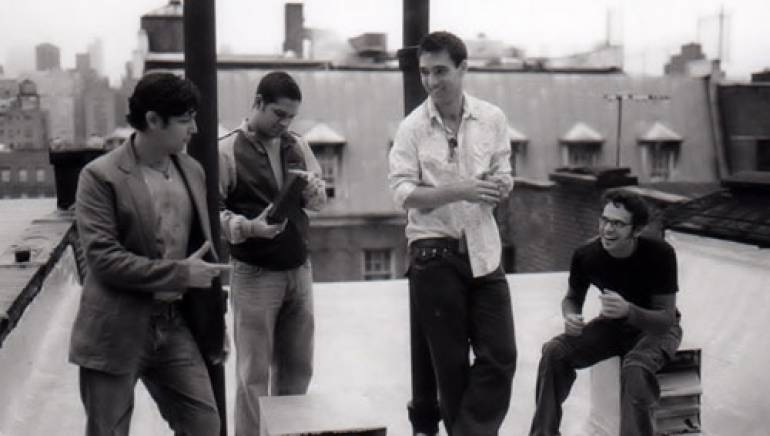 West 8 Five is an energetic young band that was formed in New York City. Their music is a soulful blend of catchy pop/rock and Latin rhythms.

“It’s like a night out for margaritas and tequila shots with Maroon 5 and Jack Johnson!”

The band’s Spanish/English fusion creates a uniquely contagious sound that unfailingly gets fans on their feet. A quick look at the fan base tells the diverse, culturally transcendent story of this band - breaking boundaries in the tradition of some of the best music of our time.

The band started out as an acoustic duo back in the spring of 2003 when lead singer/guitarist Adam Piotrowski met fellow singer/bassist Felipe Cano at New York City’s HB Studio, the esteemed theatre school founded by Herbert Berghof and Uta Hagen. The duo quickly unlocked a strong creative chemistry between one another, naturally blending their musical and personal backgrounds to create an exciting sound. As their music grew, they soon met drummer Jeremy Portwood and percussionist Demian Arriaga who together added an exicitng rhythmic flare to the music.

Their following grew quickly in NYC and the band began packing shows at the city’s hottest music venues such as The Mercury Lounge, The Knitting Factory, The Cutting Room, and Crash Mansion to name a few. Soon after they were invited to play with Grammy award-winning artists Ozomatli at the closing show of the esteemed Breckenridge Spring Massive Festival in Colorado, joining a small list of well-known artists who have been given that honor.

Following the release of their debut album, Life Is Good, the band recently relocated to southern California for a host of new opportunities following a wave of press throughout the entertainment and music community including features in Spin Magazine (Nov ‘06) and Stuff Magazine (Mar ‘07).