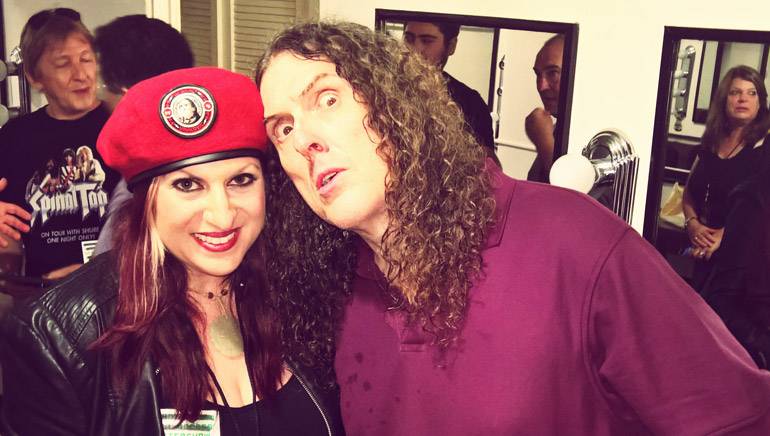 Having earned four GRAMMYs and fifteen career nominations, the incomparable “Weird Al” Yankovic is the biggest-selling comedy recording artist in history. Best known for his hilariously irreverent parodies of hit songs by the biggest stars in the musical universe over the past three decades, including “Eat It,” “Like A Surgeon,” “Smells Like Nirvana,” “Amish Paradise,” “White & Nerdy,” and “Tacky,” Yankovic is back with his “Mandatory Fun” tour supporting his 2015 release of his fourteenth studio album, Mandatory Fun. The GRAMMY Award-winning Best Comedy album made musical history as the first comedy album to debut at #1 on the Billboard Top 200 album chart, as well as reach the top of the chart in more than 50 years. Along with this astounding achievement, the album’s single, “Word Crimes,” (Yankovic’s parody of the hit song “Blurred Lines”) debuted in the Billboard Top 40, making Weird Al one of only three people to have had Top 40 singles in each of the last four decades, with the other two being superstars Michael Jackson and Madonna.

In addition to his world tour, which continues to blanket the U.S. with performances in Canada as well, Yankovic is involved in a slew of other projects including appearing on ABC’s hit series’ Galavant and The Goldbergs; being co-host and bandleader for the fifth season of Comedy Bang! Bang!; voice of the title character in Disney XD’s animated series Milo Murphy’s Law; and star, as well as creator, of an on-air promotional campaign for SundanceTV. Along with numerous voice-over roles, including spots on Gravity Falls, Wander Over Yonder, Adventure Time, and the DC animated feature Batman vs. Robin, the uniquely gifted Yankovic has also performed live on George Fest: A Night to Celebrate the Music of George Harrison, acted as executive producer of a TV show based on his best-selling children’s books, and released a career-spanning box set from Legacy Recordings, featuring all 14 Weird Al studio albums digitally remastered in all formats. And as if that isn’t enough, Yankovic, who still asks every artist for permission before he parodies their song even though he doesn’t have to, has conquered the Internet with his 8-videos-in-8 days, as well as other clips that have caused sensation and endless chatter on the web.

BMI’s Anne Cecere was in the audience at the Santa Barbara performance of “Mandatory Fun” to support and laugh with the BMI affiliate who continues his career as relevant today as when he started four decades ago. Enthusiastically commenting on the evening, she said, “It was so amazing to see families all together at this concert…people of all ages who brought their kids to discover and experience this pop culture icon the same way they did back in the 80’s and 90’s. It was truly an unforgettable experience.”

Keep going for it, Weird Al, like only you can!