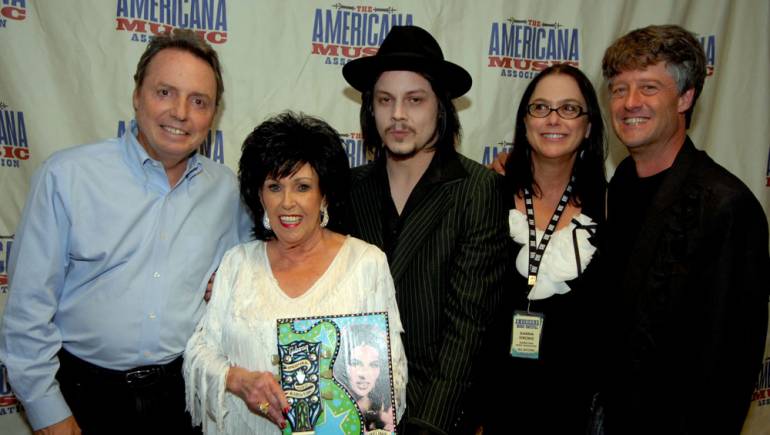 BMI artists enjoyed a big night at the Americana Music Association’s 9th Annual Honors and Awards ceremony. Staged in Nashville’s iconic Ryman Auditorium, the event celebrated a year’s worth of soul-searching, torch-lighting roots music. The theme from film Crazy Heart earned 2010 Song of the Year honors: Co-written by BMI journeymen Ryan Bingham and T-Bone Burnett, “The Weary Kind” also took home an Oscar and a Golden Globe earlier this year. Bingham’s big night became explosive as the relative newcomer returned to the stage to accept the Artist of the Year award from presenters the Courtyard Hounds.

The multi-talented Rosanne Cash also enjoyed a memorable evening, as The List received Album of the Year. The acclaimed project is a definitive bridge between contemporary and classic: the disc features 12 interpretations of songs pulled from a famous list of country standards Cash’s legendary father gave her in 1973.

Jack White presented the Lifetime Achievement Award in Performance to Wanda Jackson, the undisputed Queen of Rockabilly and Rock and Roll Hall of Famer member, whose growling glamour reshaped the role of women in both rock and roll and country. Wanda celebrated the honor with a charged performance.