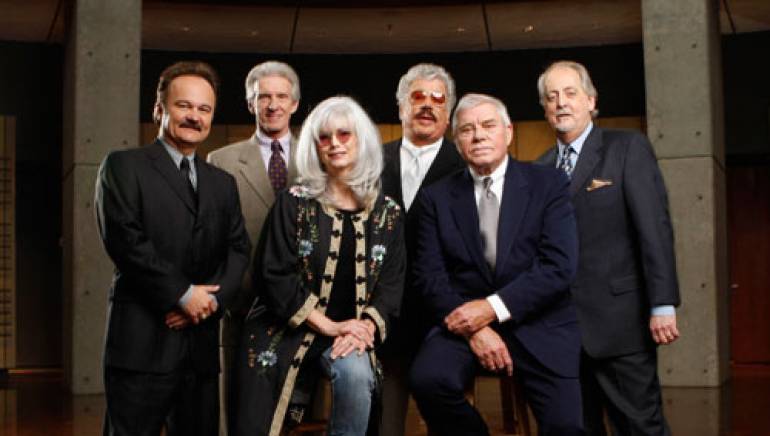 From his earliest days as a roaring 20’s crossover sensation to his leadership of the award-winning Stoneman Family ensemble, Ernest “Pop” Stoneman embodies the term “pioneer.” In the early 1920s, his performance of self-penned “The Sinking of the Titanic” charted at No. 3 on both the Billboard and Variety charts and remained there for 10 weeks. One of the first country records to sell more than one million copies, the song became one of the biggest hits of the decade. Stoneman’s keen eye for talent in Bristol, Tennessee, led to the landmark Bristol recording sessions. Considered one of the most seminal events in country music by many historians, the Bristol recording sessions introduced artists including Jimmie Rodgers and the Carter Family to the nation. Throughout the 40s, 50s and 60s, Pop Stoneman focused on the popular bluegrass, bucolic musical concoction of The Stoneman Family band. Made up of his wife Hattie and many of their 13 adult children, the group debuted on the Grand Ole Opry in 1962, and in 1967, The Stoneman Family earned the first ever CMA Vocal Group of the Year award. Recording, composing and performing well into his mid 70s, Ernest “Pop” Stoneman passed away in 1968. Speaking on behalf of the Stoneman family, daughter Patsy Stoneman said, “Daddy never gave up. In fact, the day before he died, he was playing in Texas and had to be flown home because he was in such bad pain. I said, ‘Daddy, you’ve got to hang in there, because you’re going to go into the Hall of Fame.’ And his eyes lit up like the stars. You know what he said? He said, ‘Patsy, they don’t recognize you ‘til you die.’ …A friend of mine is going by the cemetery to tell Daddy. And then I’m going to go to the cemetery.”

Beloved quartet The Statler Brothers embraced and advanced country music’s traditional family-friendly appeal through finely-crafted compositions and renowned familial harmonies. Adept songwriters and vocalists individually, the combination of brothers Harold and Don Reid, along with baritone Phil Balsey and tenor vocalist Lew DeWitt, proved exceedingly potent. With roots steeped in gospel music, The Statler Brothers first attracted the attention of legend Johnny Cash, who invited the act to join him on tour. Their peerless harmonies enriched Cash’s live shows, television appearances and recording sessions between 1963 and 1972. The ensemble’s first hit independent of Cash arrived in 1965; the DeWitt-penned “Flowers on the Wall” won a Grammy that year in the genre-wide Best Contemporary Performance category, and the tune became the Statler Brothers’ signature song. Consistent success throughout the subsequent decades solidified the group’s preeminent status, but sadly, Lew DeWitt’s health waned in the early 1980s. Initially a temporary replacement, Virginia native Jimmy Fortune’s tenor vocals eventually earned a permanent and warmly-welcomed place in the Statler Brothers’ ranks, as DeWitt chose to step down. Mr. DeWitt passed away shortly thereafter in 1990. In addition to immeasurable respect within the industry and from their millions of fans, quantitative markers of success color the Statler Brothers’ career, including Platinum and Gold album sales, shelves of Grammy, CMA and American Music Awards, along with Gospel Music Hall of Fame membership. The Statler Brothers’ Don Reid explained, “The Hall of Fame was made for our heroes. All of our heroes are in there. We watched most of them go in. That’s how we think of them. We just never put ourselves in that particular realm. It’s nice if somebody else did. We’re very honored.”

Legendary songwriter Tom T. Hall’s induction has felt all but anxiously inevitable, and to many, a simple formality. The adroit pen behind hits “Harper Valley P.T.A.,” “I Love,” “The Year that Clayton Delaney Died,” “(Old Dogs, Children and) Watermelon Wine,” “I Like Beer,” “Faster Horses,” “How I Got to Memphis,” and so many more, he carved out an inimitable niche for himself among Music Row’s finest songwriters. As reflection of Hall’s vividly anecdotal writing style, Tex Ritter dubbed him the “Storyteller,” and the moniker stuck. A unique vocal stylist, the Kentucky native also forged a successful career as a recording artist, releasing numerous successful country and bluegrass albums. His most frequent songwriting partner has been his wife, Miss Dixie, with whom Hall has penned countless compositions. The couple’s dedication and mutual passion for bluegrass music has led to reinvigorating leadership within that community; both Hall and Miss Dixie have received numerous honors from the International Bluegrass Music Association, including the Lifetime Achievement Award. Also the recipient of numerous BMI Country, Pop, and Million-Air awards, and member of the Grand Ole Opry, Nashville Songwriters’ Hall of Fame and the Kentucky Music Hall of Fame, Tom T. Hall’s successes are nothing if not well documented. Upon the announcement of his 2008 induction into the Country Music Hall of Fame, Hall humbly responded, “You don’t think of it as an award. It’s a very spiritual thing, you know. It makes you feel old.” He paused and smiled, continuing, “But I found out, it turned out to be spiritual, the nature of the thing.”