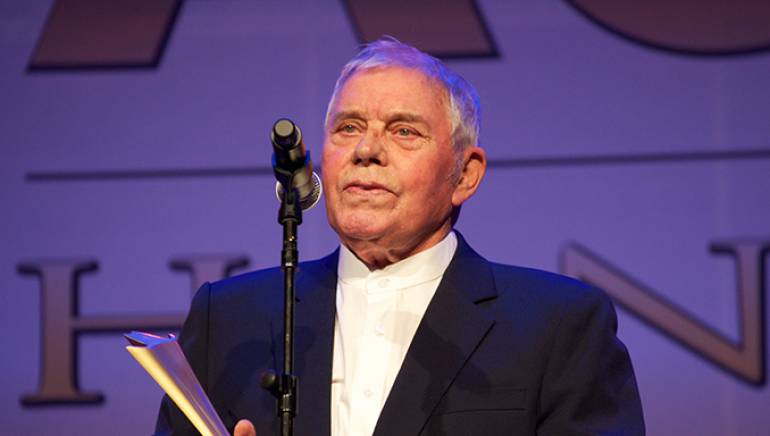 Tom T. Hall was a Roanoke disc jockey the day his phone rang with an offer from Newkeys Publishing to come to Nashville and be a professional songwriter.

“They asked, ‘Can you live on $50 a week?’ I said, ‘It’s worked so far,’” says Hall, whose singular songs earned him the nickname “The Storyteller” as well as a spot in the Country Music Hall of Fame.

That offer came in 1963, and on Jan. 1, 1964, he rolled into Music City with a guitar, a G.I. haircut and a work ethic that found him up each morning to bang out song lyrics on a typewriter. He wrote hundreds of songs, some sad and some funny, and many tending towards lovelorn. But he didn’t write a Tom T. Hall song until the day he quit making things up.

“I ran into Stonewall Jackson (the country singer, not the Confederate general) one day, and he was working on a prison album … you know, songs about prisoners,” Hall said. “He asked me to write him a prison song, and I told him I’d see what I could do. I tried several approaches to the prison songs, and they didn’t work. I told my wife, Miss Dixie, that I’d never been in prison and that I felt phony trying to write about it. And she said, ‘Well, you’ve been in jail, write about that.’”

Hall sat down and wrote a song the way someone else might begin a barroom story: “One time I spent a week inside a little country jail,” he began. “And I don’t guess I’ll ever live it down.” He went on to relate the whole of his experience: The crowded cell, the nonplussed sheriff (“That part about me being who I was did not impress him”) and the jailor’s flirty, homely wife who seemed prettier each day of Hall’s confinement.

It was nothing like what Stonewall had wanted, and Hall never even presented the song to Jackson. He did show it to producer Jerry Kennedy, though, who determined that “A Week in a Country Jail” was unlikely to be recorded by another artist because it was uncon¬ventional (no chorus) and atypical. But Kennedy pushed Hall to record it himself, and when the song was released in 1969, it became Hall’s first No. 1 country song.

“It freed my mind up,” Hall said. “It made me think that maybe I could make it without having to write songs that were just like writers I looked up to, like Harlan Howard, or Bill Anderson, or Buck Owens. I started writing a lot of songs that just started up and kept rambling. I started writing biographically, and I was breaking all kind of rules. Like in ‘Homecoming’ (a Top 10 hit in 1969), the word ‘Homecoming’ isn’t even in the song.”

No longer in the replication business, Hall penned songs that were as dagger-sharp as Raymond Carver short stories, songs written in an educated-yet-unadorned style that, along with the works of Kris Kristofferson, John Hartford and Mickey Newbury, helped alter and elevate the language of country music.

Hall sometimes says his move to biographical writing was “more relating than creating,” but it was, in fact, a creation: a gently revolutionary manner of writing that introduced listeners to the people they’d never met, and to places they’d never been. His opening lines were invitations: “‘How old do you think I am?’ he said/ I said, well, I didn’t know” from “Old Dogs, Children and Watermelon Wine”; “Tossed and turned the night before in some old motel/ Subconsciously recalling some old sinful thing I’d done,” from “Trip To Hyden”; the simple, “I remember the year that Clayton Delaney died”; or, in a smash hit he wrote for Jeannie C. Riley, “I want to tell you all a story ‘bout a Harper Valley widowed wife/Who had a teenage daughter who attended Harper Valley Junior High.”

“The best compliment I ever had, I heard from a disc jockey who played a song by somebody else and then said, ‘That sounds like a Tom T. Hall song,’” Hall says. “I thought, ‘Hey, there must be such a thing as a Tom T. Hall song.’”

There is, and you’ll know it when you hear it.