Posted in MusicWorld on November 5, 2009 by Kevin Zimmerman 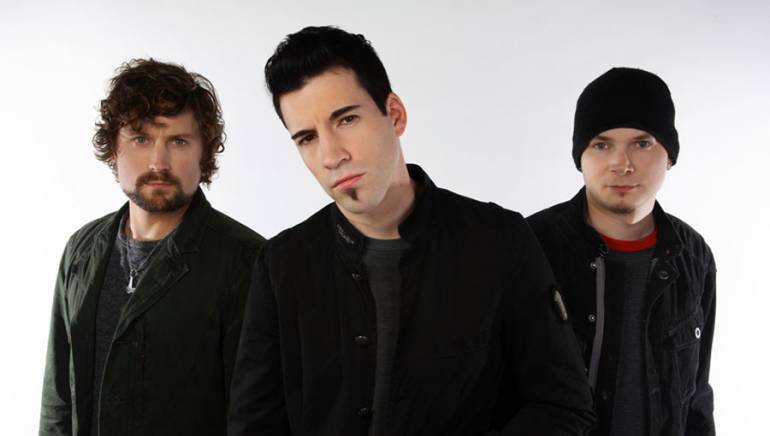 “We always try to write music without any boundaries,” says Tyler Connolly, lead singer and guitarist for hard rockers Deadman. “And that’s partly because we don’t really have a ‘core demographic.’ We’ve got 40- and 50-year-olds at our shows alongside the 14- and 15-year-olds. What’s great about Theory is that we try to let everything happen naturally.”

That seems to include the band’s popularity, which continues to steadily grow. All three of its albums have been certified platinum in its native Canada, while the latest, 2008’s Scars & Souvenirs (Roadrunner), was the first to go gold in the U.S., on the strength of singles “So Happy,” the self-loathing “Hate My Life,” mid-tempo rocker “Not Meant to Be,” and the self-explanatory diatribe “Bad Girlfriend.”

Connolly, guitarist David Brenner, and bassist Dean Back grew up within six blocks of each other in the small town of North Delta, Canada, while drummer Joey Dandeneau has been aboard since 2007. The standard routine of meeting up at guitar school and forming garage bands followed, until 2000, when Connolly got a demo tape into the hands of Nickelback honcho Chad Kroeger, who quickly made Theory the first signing to his label, 604 Records.

Though he’s been writing songs since he was a kid, Connolly says it’s only been over the past decade or so that he’s taken a more professional approach to the craft. “When I was younger I never really grasped songwriting,” he says. “I’d walk around with this little tape recorder to keep track of a scrap of a lyric or a melody line whenever they struck me. Now it’s a much more conscious thing.”

Unable to write on the road – “Too crazy,” he laughs – Connolly waits until he’s home to start thinking about the next Theory album. “It’s like a science project,” he says. “If I’m thinking of doing a song about being alone, I’ll sit down and put myself in that lonely person’s place: What are they feeling at that time? Why do they feel that way? Then I’ll put down all my ideas on the topic, and edit it down from there.”

Theory is in the midst of what seems to be an unending tour: after wrapping up the multi-act summer “Crüe Fest” tour and a headlining run through Europe, the band is currently support Daughtry on an arena tour through year’s end.

“We’re definitely at the ‘What town are we in?’ point,” Connolly laughs. “Sometimes it’s like, ‘How many more times do we have to play this song?’ But there are a lot of people out there who are still learning about us, and as long as it’s progressing, it’s fun. This is a great stage to be at.”