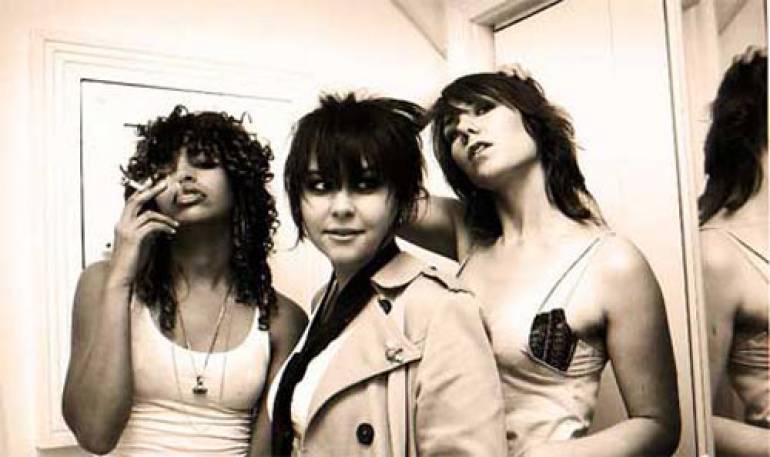 Since their inception in early 2004, THE ETTES have taken Los Angeles by storm. Drawing inspiration from old school punk, such as the Stooges, the Slits, and the Ramones, as well as more melodic acts such as Portishead and Holly Golightly, THE ETTES have developed a rock-and-roll sound all their own.

THE ETTES have been compared to such acts as Blondie, the Go-Go’s, the Strokes, and the Runaways. Their live energy is contagious, and the girls found out their large-scale appeal when they were placed in the Top 5 Finalists to be featured on Fox’s “The OC” without even knowing it! As DJ TK from LA’s INDIE 103.1 puts it, simply, “THE ETTES ROCK!”

Moving west from NYC, Coco (a southern debutante) and Maria “Poni” Silver (a NYC native and FIT grad) met up with Portland’s Terra Cloyes in Los Angeles. A regular on the indie scene, Terra was drawn to THE ETTES’ style and energy. “It’s very straightforward, and people dig that,” she says. “It’s pure rock-and-roll with style. It gets such a great reaction.”

Reviews on THE ETTES’ live show regularly comment on the high energy and stage presence of the girls. Poni, on her violently powerful live drumming: “Sometimes it’s an accident,” she suggests. “Other times, I might be trying to attack you. You never can tell. “

After KCRW promoted their last NYC showcase, THE ETTES returned to Los Angeles to record, and have recently completed their full-length demo, Eat the Night, recording everything first take. Compiling songs written and recorded over their first year together, the result is a stripped-down sound of simple but strong rhythms and arrangements, fueled by catchy hooks and an overwhelming amount of style.

There have been some new developments with THE ETTES, including their recent March residency at the Silverlake Lounge, a venue with its finger on the pulse of LA’s influential indie scene. A favorite of KXLU and INDIE 103.1 (who presented THE ETTES on April 11 at the Viper Room) THE ETTES have been playing all over LA with such acts as THE BLOOD ARM, LION FEVER, DMBQ, and THE MUFFS, to mention a very few. Even Steve Aoki of Dim Mak Records, who lauds the girls as one of his new favorite bands, and major acts such as THE VON BONDIES and THE GO-GO’S have invited THE ETTES to play shows with them!

Now, THE ETTES are playing constantly—a favorite of local indie Mecca, Spaceland—and selling out of records. Be on the lookout for their split 45 with local garage kings, THE WORDS, in September. THE ETTES are a band you’ll love to love, bringing with them a magical story, a great look, and a killer sound.

The Ettes are featured on BMI’s Podcast #3.  See it hear first.