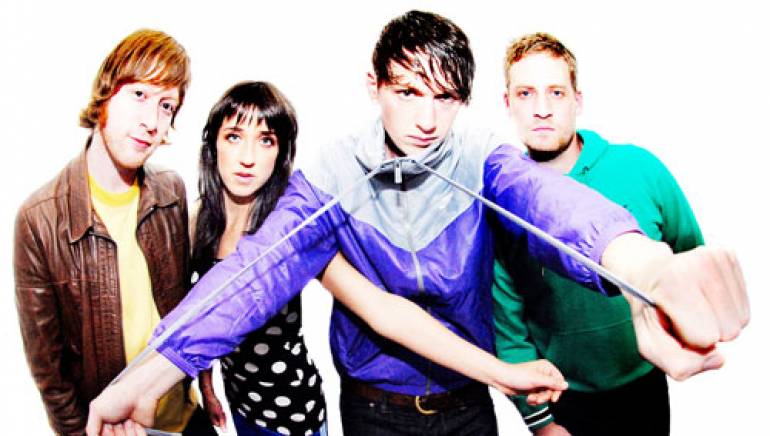 1am. Saturday, November 17, 2007. Manchester. In a disused WWII air raid shelter under Piccadilly Station, local heroes The Whip have 2000 rabid Mancunians eating out of their latex, mechanised palm. As ‘Trash’ - “an electro rock epic” (copyright Mixmag) - reaches its jagged peaks, the Warehouse Project explodes in an ear-bursting, elemental frenzy of air punching, pogoing and vicious movement. There is no trickery here. No expensive visuals, no Topshop new rave outfits, no gimmicks, just a band - Bruce Carter (vocals/ guitar), Danny Saville (machines/ synthesisers), Nathan Sudders (bass) and Fiona Daniels (drums) - utterly in tune with the crossover electro-rock spirit of the times, creating scenes of northern rave mayhem the equal of anything ever witnessed at Electric Chair or Bugged Out.

But, then, that is what The Whip do.

You (should) know their history by now. No bandwagon jumpers these, The Whip’s origins can be traced back to ill-fated indie-electro pioneers, Nylon Pylon, a band stymied by the usual major label bullshit. When Pylon fell apart, however, Bruce and Danny retreated, undeterred, to a damp, strip-lit and reputedly haunted cellar in a Salford pub to regroup. They spent six months dodging loose plaster and freezing their electrodes off in this self-imposed “boot camp”, laying the foundations for The Whip. “It’s positive, a little seedy,” they say of the name. “It just sounds good.”

They took inspiration from the things that they love, from Manchester, from clubland. ‘Blackout’ - a highlight of their imminent Jim Abbis-produced debut, ‘X Marks Destination’ - was written in tribute to a Hacienda (and the old DJ trick of cutting all the lights at peak moments) that The Whip are too young to have experienced. ‘Trash’, meanwhile - which, from an initial run of 500 12” singles, has grown into a nationwide indie-electro anthem - was designed specifically to catch the ear of the DJs and the crowd at influential Manc disco-punk night, Club Suicide. “That’s what we believed in,” nods Bruce. “Going out clubbing we’d just been getting more and more excited by dance music and, naturally, we wanted to be a part of it.”

With Nathan and Fiona recruited to the cause (just after they had split up as a couple no less), and The Whip MySpace getting appreciative hits, the band embarked on a punishing schedule of gigs that hasn’t let up since. A series of limited singles, debut ‘Frustration’ (Kids), ‘Trash’ (LaVolta) and then ‘Muzzle No1’ with Southern Fried, now their permanent home, helped spread the word.

As did the attentions of Gildas Loaëc, chief tastemaker at the impeccably cool French record and fashion label, Kitsuné . Bowled over by tracks he had stumbled across online, the sometime Daft Punk manager rushed ‘Trash’ on to his Maison 3 compilation and subsequently put out The Whip’s ‘Divebomb’ single. The effect, particularly in Japan where Kitsune are big news, was startling. They’ve visited twice now (and Fee’s ex-pat uncle recently reported back that they had the biggest promo display in Hiroshima’s largest record store). “It’s absolutely nuts,” says Bruce. “Each time we’ve been we must have had six hours sleep, over three or four days.”

If that sounds manic, it’s a work-load that The Whip relish. They simply love gigging, and even if it started out as a bit of a tongue-in-cheek thing, they try and live by the in-band motto: “Grattitude, not attitude.” They have no time for the concept of band’s as pampered, preening rock gods, who need to be put on a pedestal, or nursed through tours. Egos and hissy fits are not tolerated within the band - “We all pull each other up,” laughs Nathan. “As we say, ‘listen you, a bit less ego in my monitor, please’.” - and they’re at pains to stress how, when they play live, they see themselves not as “stars”, but as the catalyst for a communal tear-up. Danny: “When we do a gig, we’re at the same party. When we’ve finished, we want to get down there and have a dance while the other bands are on. There’s no separation of, ‘us band, you audience’.”

Nathan continues: “There’s something very real about the way we present ourselves, our attitude when talking to people, the music, and how we perform onstage.” Although, he insists they’re not alone. In this endless round of gigging and partying from Fuji Rocks to Transmusicales, The Whip have become firm friends with Hadouken!, Does It Offend You, Yeah?, The Teenagers and a host of other bands operating within what has become a global self-supporting underground network of clubs, labels and bands pushing indie-electro or, if you prefer, new rave.

“None of those guys seems to have an attitude,” says Bruce. “They’re not strutting around like roosters.” Nathan nods: “I speak to the Hadouken! guys out of the band situation. Years ago, you wouldn’t have got that.”

That, post-gig, The Whip head straight for the dancefloor - “All our nights out are spent together,” says Fiona. “This weekend we’re in Belgium and Erol Alkan’s DJing.” - is clear in their music. Just as New Order used to take inspiration from the sounds of cutting-edge New York clubland, Italo-Disco or acid house, so too The Whip devour the best new electro, from Simian Mobile Disco to Sebastian, and it shows.

If ‘X Marks Destination’ is about anything, says Bruce, it’s about, in a increasingly hostile world, craving precisely the escape that good dance music offers: “It’s a celebration of freedom. Forgetting about shit, going out, having a good time. A lot of the lyrics are about struggling towards that freedom.” And it is a struggle. ‘Muzzle No1’ or ‘Trash’, for instance, (the latter originally, “a long piece of bullshit all about spitting at people”), are very much modern, mixed-up dance tracks. They’re cathartic anthems, that induce chaos on dancefloors, but there’s nothing dumb or sappy about them. There’s no upbeat rhetoric. Instead, they brim with a very 21st century sense of frustration and alienation. It’s a Manchester thing, reckons Bruce: “There’s an intensity, an industrial vibe to the city, that definitely rubs off on the music.”

“‘Fire’ is fresh,” says Bruce. “And next album we’ll probably progress more towards that sound.” He pauses: “But I definitely want to keep that pop element.” And why not? Pop nous can’t be learned. You either have it or you don’t. And as ‘Frustration’, a neat, compact marvel of engineering, or ‘Sister Siam’, a shot of synthetic MDMA straight into your pleasure receptors, show, The Whip, like Hot Chip or Klaxons, have intuitive pop chops, dispensing hooks and melodies with deadly accuracy.

This isn’t hype. It’s plain audible fact. In 2008, The Whip will take their place at contemporary electro’s top table. Best get ready for the after-party.

SOURCEMusicWorld TAGS Dance Pop On The Scene Daft Punk Yeah? Does It Offend You The Whip