Posted in MusicWorld on August 18, 2011 by Ellen Mallernee 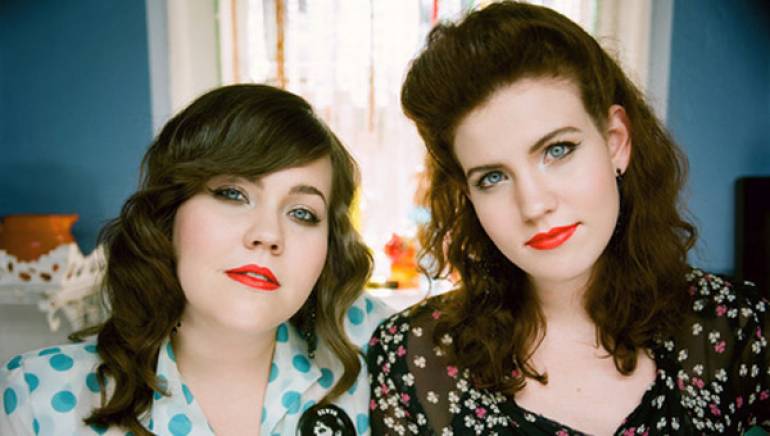 For a moment, put aside the overnight success of singers from American Idol or The Voice. Here’s a real fairytale story for you.

The Secret Sisters story hasn’t been spun together by 30-second sound bites or text-to-vote pleas but by one aced audition, the out-of-nowhere anointment of Jack White and T Bone Burnett, and a hurried introduction to life on the road, which has taken sisters Laura and Lydia Rogers far from the Muscle Shoals, Alabama, Church of Christ where they first dropped jaws with their high-lonesome harmonies.

On-stage today, The Secret Sisters bat bedroom eyes, sway their hips demurely, clutch their hands to their chests — as serene as though they’ve been performing all their lives. But they’re brand new to this. Only two years ago they’d never even been on a plane.

In 2010, when eldest sister Laura scored a big audition in Nashville — where she worked as a nanny — with music business representatives, she went only as an exercise for her stage fright. Producer Dave Cobb promptly went bananas over Laura’s voice and asked to hear her sister sing, too. Soon the sisters wound up in a Los Angeles recording studio.

Crooning into a single microphone and surrounded by vintage recording equipment and a live band all in the same room, The Secret Sisters made their acclaimed, self-titled first album. At an equally breakneck pace, their demos arrived in the hands of Jack White, who dialed them one day to see if they might come to Nashville to record a couple of songs, and Grammy-winning producer T Bone Burnett, who refined production already done by Cobb and started a record label specifically to release The Secret Sisters.

Just two of The Secret Sisters songs were written by Laura and Lydia — one of them the unspeakably lovely “Tennessee Me” — while the rest are straightforward covers of songs by the likes of Buck Owens and Frank Sinatra.  The sisters say she want their next album to be mostly original.

“We really like gentle, non-offensive, palatable kind of music,” says Laura. “We gravitate towards music that can be enjoyed by someone of any age for a long time. We’re learning how to get those songs out of our heads.”

The sisters find the majority of their songwriting fodder in their childhood, which was, as Laura describes it, all about “traipsing around barefoot in the countryside … All of that made its way into the studio and made [The Secret Sisters] what it was. It comes with us even today.”