Posted in MusicWorld on April 2, 2007 by Rob Patterson 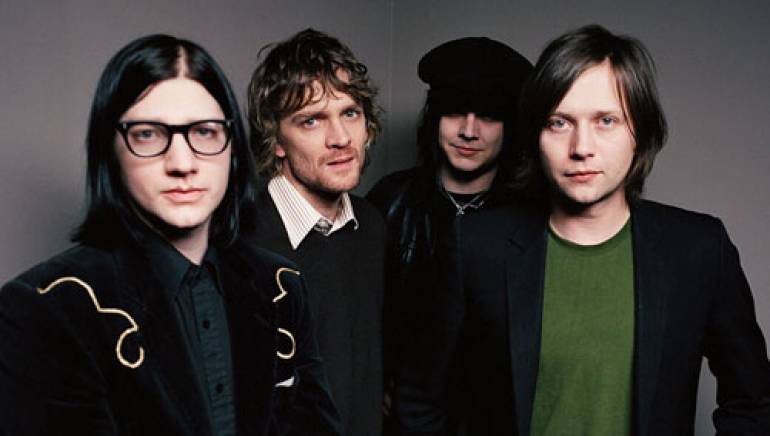 Webster’s defines a “raconteur” as “one who excels at telling anecdotes.” Or in other words, a storyteller. Anyone who knows Jack White’s prodigious talents as a songwriter with The White Stripes would agree that he’s one of contemporary rock’s mightiest musical storytellers (as well as a premier stylist, guitarist and bandleader). Pair him with another notable songwriter and artist, White’s old Detroit pal Brendan Benson, then add bassist Jack Lawrence and drummer Patrick Keeler — both from the Cincinnati band The Greenhornes — and you have The Raconteurs, one of the hottest new wrinkles within the modern rock scene.

The new group began when White and Benson got together one hot summer day and wrote and recorded the song “Steady, As She Goes” at Benson’s East Grand Studio (which was, in fact, the attic of his home). Fired by what they created, the two joined forces with Lawrence and Keeler — whose band had been produced by Benson — to record a full album of Benson/White compositions whenever they had time amidst all their other activities.

“We just went in and wrote songs and recorded immediately,” says White of their creative approach. Even though inspiration drove the project, the process of getting 10 songs down took a good year. But finally, in May 2006, the foursome released their debut album as The Raconteurs, Broken Boy Soldiers.

The disc hit No. 7 on the U.S. charts and No. 2 in the U.K., powered by the success of its first single, the seminal “Steady, As She Goes,” which reached No. 1 on the Billboard Modern Rock chart. Hitting the road to appear at festivals like Lollapalooza as well as at clubs, the group that calls itself “a new band made up of old friends” quickly became a star attraction.

What at first glance may have looked like a one-off side project now seems destined to take its place alongside its members’ other pursuits. The band has relocated to Nashville and is writing and recording new material. But even after a hit album and the better part of a year on the road, The Raconteurs remain a work in progress. “The band is just changing so much,” says White. “We’re really trying to figure out what we are.”