Posted in MusicWorld on August 18, 2016 by Steve Chagollan 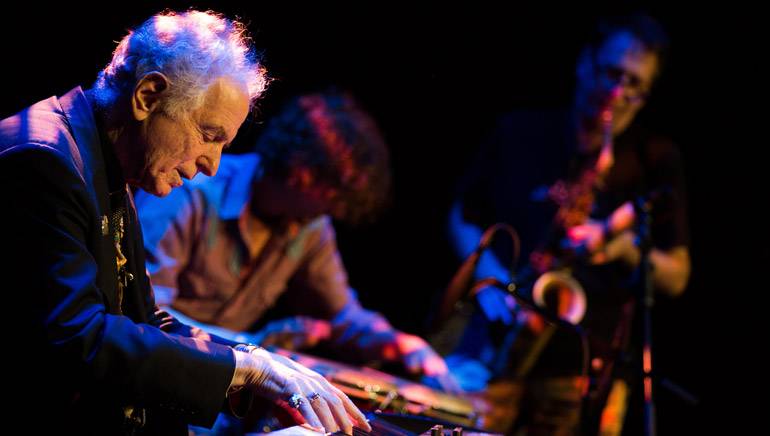 David Amram might be the most accomplished composer of our times with the least amount of recognition. This is a man who has worked with so many 20th century icons that first names aren’t necessary: Bernstein, Copland, Monk, Gillespie, Mingus, Kerouac, Dylan and Seeger, just to name a few. His roster of collaborators suggests a highly eclectic approach to the arts, with an emphasis on melding the spontaneity of jazz and the lyricism of folk with the structure and tradition of classical music.

During his long and storied career, Amram has witnessed, and taken part in, several tectonic changes in music and culture: the rise and fall of the Beat Generation, the ascendance of jazz as a countercultural art form before rock ’n’ roll superseded it, and collaborations with directors like John Frankenheimer and Elia Kazan when Hollywood was moving towards a new form of personal expression. All the while his prolific work for the concert hall was never limited by popular trends.

“I’ve been very lucky,” Amram says about his longevity. “And also, struggling to survive and do what we love to do — that sense of challenge — is so absorbing that you don’t have a chance to age properly; you don’t have that luxury in your schedule. Self-pity, despair, narcissism and careerism are not only disgusting for other people to be around, but I think they’re bad for your health. Also, I have great kids and a good little grandson. That makes you realize you’re part of the whole picture of life, and that life goes on with or without you.”

Amram, who has written more than 100 orchestral and chamber works and continues to be busy as a musician and lecturer, is celebrating the 50th anniversary as the first-ever Composer in Residence for the New York Philharmonic. It was a year-long post he accepted in 1966 when Leonard Bernstein, already a living legend at the time, was the music director and principle conductor for the orchestra. Bernstein also hand-picked Amram for the inaugural position after being considered among 100 candidates by the orchestra’s foundation. Unbeknownst to Amram, who thought he had a snowball’s chance in hell of being chosen due to his unorthodox educational background, Bernstein had become quite familiar with his work, including the scores for Splendor in the Grass (1960) and The Manchurian Candidate (1962), his original music for Joseph Papp’s Shakespeare in the Park and an opera that was televised on ABC in 1965, The Final Ingredient, An Opera for the Holocaust.

“I never really received a grant because I never did the things that you were supposed to do to be a classical composer in this country,” recalls Amram, who nevertheless spent time studying at the Oberlin Conservatory of Music and the Manhattan School of Music. “I knew that to become a composer you had to go to one school or another school that the New York Times’ arts section deemed as fashionable. The manager of the Philharmonic pointed out to me that in my interview I not only mentioned Bach and Beethoven but also Dizzy Gillespie, Thelonious Monk, Billie Holiday, Benny Goodman, Bix Beiderbecke, King Oliver and John Coltrane. He said, ‘You equate barroom entertainers with the treasures of European culture.’ And I said I was brought up on both — the treasures of those great European master composers and the genius of the jazz innovators.”

Bernstein, however, heard something in Amram’s work that spoke to him, including the jazz and Latin elements in his movie scores that reflected Bernstein’s own sensibilities in such works as West Side Story as well as the conductor/composer’s sole suite of music written specifically for the big screen, On the Waterfront. Amram adds that Bernstein taught him he was part of a continuum. “He said, ‘Your job as a composer is not just to please yourself, you are supposed to add something to the repertoire.’ He also said, ‘You have to be an ambassador for music and to bring that to young people.’ He didn’t say, ‘You have to sell that to young people or make it relevant to young people by adding synthesizers or setting guitars on fire.’ He wasn’t into being a fashionista or being trendy. He was interested in quality.”

As a player, Amram is best known for mastering the French horn, which he studied with the late Gunther Schuller — who, like Amram, straddled both the classical and jazz worlds. He was also one of the first serious musicians to incorporate literature into their performances. He was instrumental in creating the first-ever Jazz/Poetry readings in New York with Jack Kerouac, with whom he collaborated for more than 12 years, including writing the music for Kerouac’s experimental short Pull My Daisy (1959). And in 1965, he wrote the music for the cantata, Let Us Remember, by the Harlem poet Langston Hughes. He has also incorporated Native American idioms in his music, as well as other indigenous folk traditions.

In fact, there are few disciplines in the arts that Amram has not been exposed to first hand. Beyond his operatic, symphonic and chamber works, he has written three memoirs: Nine Lives of a Musical Cat (2009), Collaborating with Kerouac (2005) and Vibrations (2001), about which the Boston Globe called him “the Renaissance man of American music.”

Although Amram has been a veritable chameleon as an artist, some things have remained constant during the course of his career. He says he’s been with the same publisher for 53 years, and has been a BMI member dating back to the ’50s. He cites Oliver Daniel, who was in charge of BMI’s classical music department at the time, as an inspiration and a source of encouragement. “BMI was a godsend in my life,” he says. “So many of the people with BMI — the songwriters, the jazz players, the classical composers — were actually able to get an advance when they were barely squeaking by just by signing. At the time that was a huge thing. And they have stood by me all the years I’ve been doing this. They also give young classical composers some hope that they can exist on the face of the earth.”

In the meantime, Amram’s schedule continues to be crammed with activity. He was in Texas performing and also conducting an orchestra at the Kerrville Festival of the Arts over Memorial Day weekend, and recently addressed 1,000 French horn players at an international symposium in Ithaca, NY, before honoring his old friend Pete Seeger at the Tarrytown Music Hall in Tarrytown, NY. He’s also working on two other music commissions, as well as a fourth memoir with the working title, The Next 80 Years.

All the while, his mission statement has always remained the same. “The organic, defining principle of creating something of lasting value and re-nourishing the soil from whence the fruits of your labor come is the way I’ve tried to live my life,” he says. “As Dizzy Gillespie told me, ‘Time to put something back into the pot.’”