Gunther Schuller is full of dynamic energy as he continues to enjoy his career as a composer, conductor, educator and musician. There is a deluge of delightful stories that comes with chatting with the 88-year-old creative genius, whose latent musical talents emerged when he was a toddler; notably, conducting in perfect time to a gramophone recording of “The Roses of the South” waltz by Johann Strauss. A few years later, he sang Richard Wagner’s “Tannhäuser Overture,” imitating its sonorities and nuances, while at play. At 15, he played the French horn and toured with the American Ballet Theatre orchestra, traveling all over the United States. By the time he was 17, he joined the Cincinnati Symphony Orchestra to play principal horn for two years before auditioning for a spot at the Metropolitan Opera in New York with George Szell. He went on to spend 15 years with them.

Schuller still considers New York an incredible musical center, and credits the city for his then-burgeoning interest with jazz. The longtime BMI affiliate took some time out of his 12-hour day to talk to us about his amazing career and its beginnings, and to share what he has learned through the years.

How did your interest and work with jazz begin?
I never became a great, famous jazz horn player but I and three others in New York, we were sort of the pioneers of bringing the horn into jazz music. The first little jazz horn solo was [composed of] eight bars in an Artie Shaw recording of a piece called “Frenesi.” That was the first time a horn ever appeared on a recording.

By the middle to late forties, the horns were getting into recordings with Frank Sinatra and other bands. Claude Thornhill had two wonderful horn players and I got involved with this life, being a horn player in both classical and jazz. That developed my interest in jazz and I became somewhat [of a] major historian of jazz. And all of this probably would not have happened exactly in that way if I hadn’t been in New York.

You’ve said that the Third Stream is something like “if jazz and classical music begot a child.” Would you say you’re a little bit more partial to either genre?
It depends [on] who is creating it. I pronounced [this] to my father one day, and he nearly had a heart attack; [I said to him] that ‘Jazz — in the hands of the greatest jazz composers, players — is just as great as Beethoven or Bach.’ He came around after some years and especially when I became successful in jazz. The same in classical music. When Johann Sebastian Bach did it, that was the highest level of creativity by far at that time. The same thing about jazz. Duke Ellington is still the greatest composer we’ve had over the years and there are others like Charles Mingus, Gil Evans. Those are some of the really great ones whose music has lasted.

As the proponent of the Third Stream, do you have any favorite composers who were involved or a part of the genre?
The ones that I would mention immediately were on the one hand John [Lewis], the founder of the modern jazz quartet, and one of the great musicians of that time. We partnered up and did all kinds of fantastic things, bringing jazz and classical music together in our concerts. We started a publishing company to bring the music together. The other one is Mingus. In a way, Gil Evans was also a very classically oriented composer but he wrote these amazing jazz pieces. So those would be the three that took up the idea of bringing jazz and classical music together.

Speaking of supporting young composers, they would probably love to hear some career advice from you.
The basic thing is  work extremely hard. Don’t drink a lot of beer every night. Work hard at whatever your talent may be. The thing about composing, nobody can tell — even Beethoven couldn’t tell until he had composed quite a bit of music and it got better and better — the degree of talent. You can’t get up one day [and say], ‘I’m going to be talented today and write a great piece.’ The only thing you can do is start composing and work your buns off working on it and studying the great music of the past and learning from it and then try to create sort of your own language. I emphasize the fact that I did not know the extent of my talent as a composer until maybe the last 10, 15 years. You just go on and you write some good pieces and not-so-good pieces, then you write a fantastic breakthrough piece, then you write seven pieces that are very good but not great. Eventually, you find out the extent and the limit of your talent. You have to be very modest about this, but work hard, that’s all I can say.

I worked hard. I decided, at the age of 18, I would only sleep four hours a night because there was so much I wanted to learn and study. I studied the works of hundreds of composers. That’s what you have to do.

Could you tell us some more about your experiences with new compositions and upcoming projects?
When I got into my eighties, I began to realize that demand for my composing and conducting was leveling off. It wasn’t finished but it was starting to lessen. In 2011 I got a call from Tanglewood [Music Center, in Boston, Massachusetts], Ellen [Highstein], and she gave me a commission that was to be performed in 2012. I was so excited because I spent 25 fantastic years as artistic director of the school, so it was nice to have this desire on their part to commission me, to celebrate some of the things that I had done there. I wrote that piece in about 3–4 weeks in January and suddenly in February and March there came four more commissions.

I said [to myself], ‘What the hell is this?’ I will back that up with a little conversation — Aaron Copland and I were very close and at dinner he said, ‘Oh, by the way, Gunther, I’ve received two commissions this year.’ ‘Oh, Aaron, I also received two commissions,’ I said. We were both amazed. Aaron said (you know he was at that time the leading American composer, right?), ‘What have I done to deserve this?’ The point being, you didn’t get two commissions in a year. You were lucky if you got one. He was so surprised and I was, too.

This idea of suddenly getting four commissions, that was just incomprehensible to me. Within the last two years, I’ve received 20 commissions. This has never happened before, and I do not understand how or why it happened [though] I have some theories about it. I have now written 18 of those 20 [commissions]. One of the latest ones was a symphony for the Cincinnati Symphony. These were great commissions — the Miro String Quartet, which is one of three great string quartets in this country, various [commissions from] the London Philharmonic, Sau Paulo Symphony Orchestra — all kinds of fantastic commissions.

You’re definitely very busy. How do you balance your time? As you work on these commissions, how do you keep developing your craft?
You just keep on working and studying, and you can call it developing your craft. What is more important, and this applies to every great composer that has lived, what makes a composer great and memorable — Bach, Beethoven, Mozart, Brahms, Hayden, Schumann, Wagner and then Strauss and then the 20th Schoenberg and the so-called Viennese school — and what makes them endure through two centuries is that they have found their own language.

You’re expected to develop some kind of craft, otherwise, forget it. But that’s not enough. Some people have a certain degree of craft but it’s the ideas of the music, it’s the substance of the music and ultimately the language of the music. Anyone versed in our classical repertory — if I hear three seconds of music that’s on the radio and I did not hear the announcement, I will immediately know that that’s either Beethoven or it’s Schuman or somebody. In other words, an instantly recognizable voice. That is the ultimate goal.

If you want to be so ambitious as to be a great composer, well, [it’s been] 10 years that I’ve felt that I could say, ‘Now, I have actually found my own personal language.’ 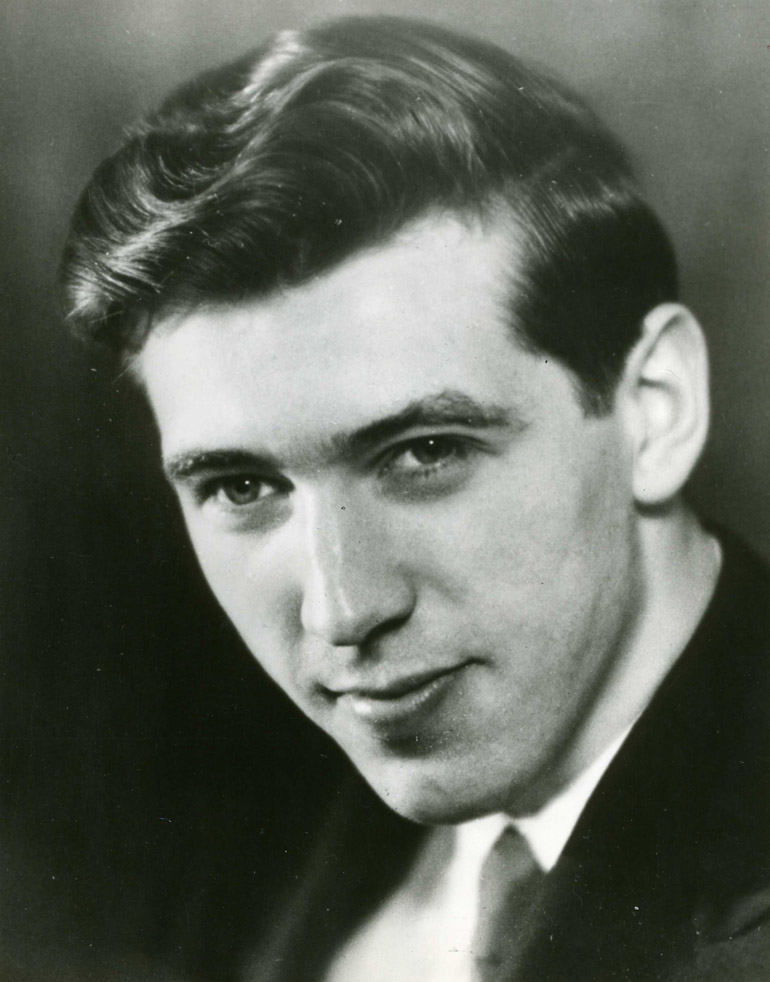