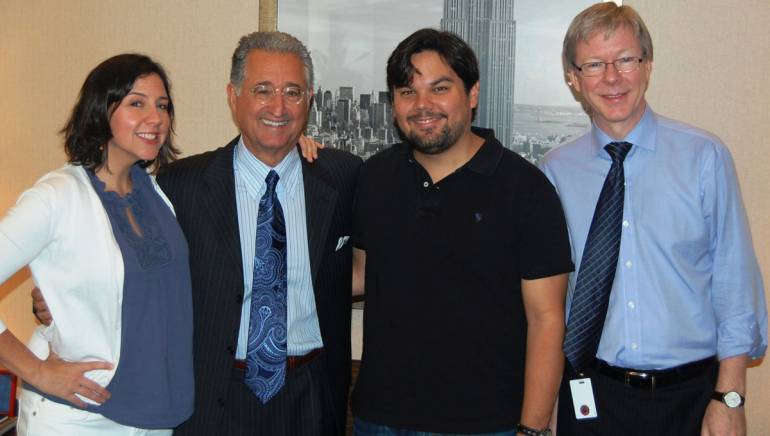 Robert Lopez knows theater audiences. On the one hand, such a statement may sound absurdly obvious. To date, Lopez has been a principal co-writer for exactly two Broadway musicals, Avenue Q and The Book of Mormon, that have won exactly two Tony awards each for Best Musical and Best Original Score. The latter of these adds the Tony for Best Book, and that’s not even mentioning the other sundry Tonys and other major awards his works have won. If Lopez’s shows were any more decorated, they have to be moved from Broadway to HGTV.

On the other hand, that Lopez cares at all about audience sounds like nonsense. From a distance The Book of Mormon (co-written with the more popularly-known Trey Parker and Matt Stone of South Park fame) appears to exclude as many potential audiences as it invites. To some, it could appear gratuitously vulgar and even sacrilegious. The translation of one of the show’s catchiest numbers “Hasa Diga Eebowai” cannot even be printed here. Plus, the show appears to use the bully pulpit of the stage to attack Mormonism, which easily ranks among the most abused religious sects in the U.S.

However, such attitudes are simply the prejudice of those who haven’t seen the show. Lopez rightly insists that he and his co-writers have a great “appreciation of Joseph Smith,” and were “careful not to point out a lot of negative stuff about Mormons,” even while they were being satiric. Instead, Lopez holds that The Book of Mormon is “really pro-religion and pro-faith. It’s not saying that religions don’t do bad things, but it does say that when taken the right way, religion can accomplish a lot of good in people’s lives.”

This difference between a rigid orthodoxy and a faith that does good in the world is the distinction that the main characters must learn. The story involves Elder Price (Andrew Rannels) and Elder Cunningham (Josh Gad), two intrepidly naïve Mormon missionaries. They are armed with real, albeit untested, faith and a false assurance that they will do “something incredible that will blow God’s freaking mind.” When the two are deployed to Uganda, they meet a group of unlikely converts, armed in much more substantial ways—warlords with guns aimed at enforcing female circumcision and residents with a razor-sharp truculence directed towards the God they believe responsible for their daily torments. After breaking rule 72 and abandoning his partner, Price “doubles-down” on his faith and confronts the warlord directly. Left alone with Ugandans in distress, Cunningham adopts a humanitarian pragmatism and re-imagines “The Book of Mormon’s” scriptures with a mix of Stars Wars and Lord of the Rings to halt atrocities they are about to commit.

Audiences undergo a similar conversion from simple expectations to more complex understanding, a change that Lopez considers essential to the specialness of the show. Of this transformation, Lopez says, “People don’t really expect it to be what it is, which is a real musical with characters you care about and an ending that pays off in … a genuinely happy way. They’re not expecting to be genuinely uplifted. People think it will be satirical. They are surprised to find that there’s any depth to it.”

That “depth” emerges from the show’s ability to combine opposing elements in unexpected ways. Consider “Hasa Diga Eebowai.” In this parody of The Lion King’s “Hakuna Matata,” the Ugandans very frankly specify the places they would like to violate God. But never has a malediction against the almighty been sung with a more infectious and uplifting joie de vivre. These life-affirming qualities of the story trump even the most coldly satiric moments in the piece. And by the very end of the musical, when Mormons and Ugandans alike sing “Ma Ha Nei Bu Eebowai,” the sentiment is one that audiences can believe (not to mention one that can be printed): “Thank you God.”

In his own career, Lopez speaks of having undergone a professional conversion, which resembles that of his characters in the way it led him to a more complex understanding of his field. He credits BMI’s Lehman Engel Music Theater Workshop for this conversion. Upon finishing college, he recalls, “I didn’t have a career path or a way to get started, so I joined on blind faith, and it ended up really changing my life.” He moved from being “a self-styled protégé” to adopting an understanding that composers of musical theater work as part of a community. In the workshop, he met Jeff Marx, with whom he composed Avenue Q, and, more importantly, Kristen Anderson, who became his wife and with whom he has co-written songs for Disney’s new Winnie The Pooh.

Lopez has now moved from being a student in Lehman Engel workshops to conducting them. If in this role, Lopez converts future composers to his way of thinking about audience, it would be good news. The world can’t have too many Robert Lopez’s.