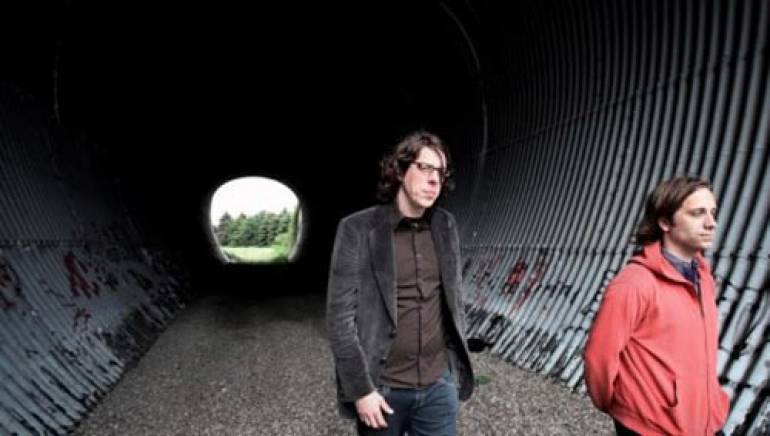 Akron, Ohio, July 2002: Two young men, Dan Auerbach and Patrick Carney, Akron natives and college dropouts the both of them, are working for a local property owner, the type of guy who owns a variety of low-rent apartment buildings around town in various states of semi-repair and full-blown disrepair. In short, the boys mow lawns for a slumlord. Between them, they’ve got a truck, two lawnmowers and a weed-whacker and, like everybody else, a hustle and a dream.

In addition to working together, the guys play in a duo called The Black Keys (named in honor of a schizophrenic Akron artist, who called the boys “black keys,” his phrase for people who weren’t quite right). Though they’ve known each other since they were kids, they’ve only been playing together as a unit for a year. They’d drifted apart in high school (“Most of Dan’s friends wanted to beat me up and I wanted to provoke most of his friends to want to beat me up,” Patrick says), but each was deeply involved in music; Patrick’s tastes leaned toward Devo, noise rock and hip-hop, while Dan, who had grown up playing old folk songs at family reunions, gravitated towards electric Mississippi blues.

In 2001, Dan had booked some time to record with his current band in Patrick’s primitive basement recording studio. When the group didn’t show, Dan and Patrick banged out the first Black Keys songs off the cuff. The demos recorded that serendipitous afternoon secured them a deal with Alive Records for their debut, The Big Come Up, and barely a year later, they’re sweating behind lawnmowers in the summer sun, looking forward to taking off in a busted hatchback the next week to see America on their first tour. The job is a vital component in the big picture. The plan is to work, save money, tour, come back to Akron, repeat ad nauseum. Humble rock dreams. So what do they do? They go and get themselves fired, that’s what they do. For not edging a lawn correctly.

Unemployment be damned, they blow Akron. Dan, quiet and wry, plays fuzzed-out guitar and sings—scratch that—howls sweetly and growls soulfully when he’s on stage, like a man whose only friends in the world are his songs of suffering and true romance and the guitar he plays them on. Patrick attacks his drums like they stole his mother’s purse. The combination sparks. Some folks actually show up at their debut shows, and The Big Come Up gets a four-star rave in Rolling Stone. All of a sudden getting a job once back home seems like an not-so-attractive Plan B. Dan and Patrick figure that if they spend almost every waking hour on their music—practicing, playing, touring, writing and so on—they can make this enterprise work. So the boys get busy. They rehearse non-stop in Patrick’s rat-infested basement. They undertake a punishing tour schedule, and in 2003, they record their colossal-sounding sophomore album, Thickfreakness, in Patrick’s basement studio for their new record label, Fat Possum, in one furious 12-hour session.

Later that year, the band takes up residence on the second floor of a cavernous former tire factory in a desolate section of East Akron. Putting together an ad hoc studio of second-hand equipment and old magnetic tape recycled from not-quite-right recordings of Mississippi fried chicken joint commercials, sessions for Rubber Factory, the band’s third record in as many years, begin in January and last until April 2004. Rubber Factory isn’t slick, it’s raw and it’s beautiful in a ragged way. The plan’s working: The Black Keys are touring the world, Dan and Patrick are able keep Akron as their base and stick close to their families and favorite haunts, and they still haven’t had to get “real” jobs.

Cut to early 2006—The Black Keys return to the basement (Patrick’s new, rat-free studio, Audio Eagle) to record Magic Potion, their fourth full-length album for new label Nonesuch. Despite its title, Magic Potion is ironically the sound of The Black Keys getting their signature sound down to a science—it’s the band at their heaviest, grittiest and most powerfully stripped down. From the nasty, sweaty strut of the album’s first single, “Your Touch,” to the to the sublimely narcotic devotional ballad “You’re the One,” right on down to the stomping, house-rocking call to arms “Modern Times,” The Black Keys have made the finest recording of their career.

A lot has changed since Dan and Patrick’s lawn-mowing days: albums have been recorded; relationships have been busted; tour transportation has been upgraded from a compact car to a passenger van; the band’s gone from playing empty clubs to selling out huge halls; The Black Keys have been praised by critics, fans and musicians ranging from Robert Plant to Radiohead lead singer Thom Yorke, who specifically requested that the Keys accompany the band as their opening act this past June.

But strangely enough, things have also stayed the same. Dan and Patrick are still living in Akron, still barbecuing with their families, and still kicking up holy rackets of earth-shaking fuzz and booming percussion in basements. Magic Potion, in addition to being a hell of a rock and roll record, serves as a raised glass to the band’s home. As Dan says, “The idea was for people to be able to sit on a porch in Akron with a can of beer and blast the record through a boom box.”

Only history and the people of Akron will be able to tell if Magic Potion passes that particular test, but if the Keys have anything to say about it, they’re going to be tireless in their mission of bringing the gospel of Akron to the world. “People can depend on Pat and me to play music and be around for life,” Dan says, adding. “We have to; it’s the only job skill we have.”

SOURCEMusicWorld TAGS Musicworld On The Scene Artists The Black Keys