Posted in MusicWorld on September 13, 2016 by Abby White 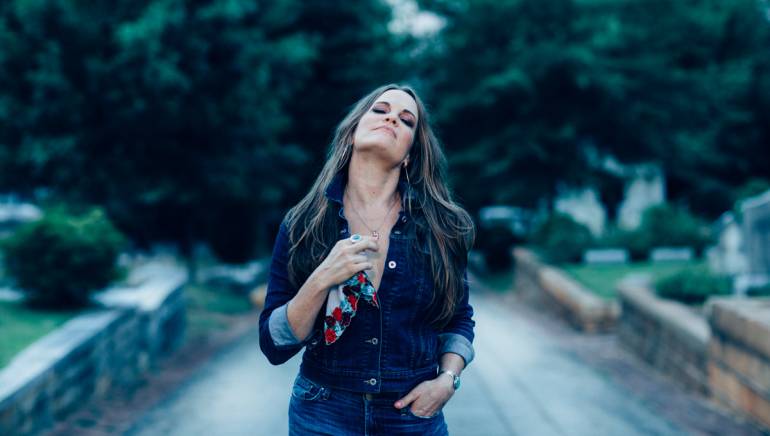 For nearly 13 years, Bonnie Bishop had been waiting for her big break. After graduating from the University of Texas in Austin in 2001, she immediately started making a living as an artist, never even holding a day job. She played regularly in fairs and festivals around Texas, steadily building an audience. Soon she was touring 150 to 200 dates a year in her home state and beyond. Six years later, she moved to Nashville to focus more on her songwriting craft. She put out five country albums. Her idol, Bonnie Raitt, recorded one of her songs. Another one of her songs appeared on the high-profile Nashville television show. But the big break never quite came. And by 2014, Bishop had enough.

“I thought, it’s just not going to happen,” Bishop recalls. “I’d been doing this for 12 years and I still didn’t have a manager. I just thought it was time to throw in the towel, so I left Nashville and went home to Texas to do something else.” Just as Bishop was prepping to leave town, she ran into David Macias, cofounder of indie-friendly marketing, distribution and management company Thirty Tigers.

“I was super depressed,” Bishop admits. “I told him, ‘I missed my chance — my career is over.’ I told him that I was going to leave music and I was trying to figure out what to do with my life, and that I had all these songs that I’d never cut. I sent him demos — just simple, acoustic tracks. I didn’t hear from him for, like, five months, and then he called me and said, ‘I listened to this new stuff of yours and it’s really good. I hope you don’t mind, but I sent it to Dave Cobb. I think this might be what’s missing from your career — the right producer.’”

At the time, Bishop didn’t know who Dave Cobb was, and Macias explained to her that he’d just produced Sturgill Simpson and Jason Isbell’s records. Macias set up a lunch for the two to meet. “The first thing he said to me was, ‘I don’t know why you tried to make country records — you’re not a country singer,’” she says, laughing. “He told me I was a soul singer. He’d never seen me play live, and he’d only heard a couple of my acoustic demos. It was so encouraging to me that Dave Cobb heard the soul in my voice and was giving me permission to make a different kind of record than I’d made before. That says a lot about what kind of producer he is — he gets to the heart of who the artist really is, and he pulls that out.”

Bishop grew up listening to soul music, citing Etta James, Otis Redding and Sam Cooke among her favorites. But when she started writing music, she couldn’t play an instrument, so she felt limited on what she could write.

“Being that I was in Texas, I was influenced by singer-songwriters like Townes Van Zandt or Patty Griffin,” she says. “I’m so in love with words and writing — I was using simple chords and was very focused on the lyrics, and I didn’t even realize I wasn’t being true to my musical self. I’ve always sang soulfully, but I wrote kind of like a country artist. I was trying to find my way. I just didn’t see how I could go back and reinvent myself when I’d made five country albums and I’d been living in Nashville writing country songs. It just felt like I’d made my choices in my career, and it had resulted in a dead end.”

Another year went by before Cobb and Bishop reunited in the studio to make a record together. Cobb, who doesn’t do any pre-production, went through a long list of songs Bishop brought to the studio, and she trusted him to help her pick the best ones. At the end of the recording process, they called Macias to show him what they’d done. “He was so excited!” Bishop recalls. “He turned around with tears in his eyes and said, ‘I knew you were supposed to work with Dave Cobb. I love this record; I’m signing you to Thirty Tigers and we’re going to take care of you.’”

Thirty Tigers released the aptly titled Ain’t Who I Was in May, and it’s already garnering comparisons to Dusty Springfield, Mavis Staples and, naturally, Bonnie Raitt. Bishop recently hit the road supporting Rich Robinson and will perform at the Americanafest in Nashville in September. She still believes that quitting the music business was the best decision for her career.

“I definitely felt a freedom this time around that I did not have before, when everything seemed to matter so much,” she explains. “The fear of failure left me. I know I won’t die if it doesn’t work out. I know what that feels like if nobody buys it. I already know what happens if I don’t make any money. Through that two-year process of quitting, that was how I met Dave Cobb, how I was signed to Thirty Tigers, and how we made this awesome record. Now it’s just about writing music and getting out and playing shows. I don’t feel like a slave to this business anymore — I will survive no matter what happens. That’s a good feeling.”

Another benefit of Bishop’s sabbatical from the music industry was that she had the time and energy for other creative pursuits. She briefly attended graduate school for creative writing at The University of the South at Sewanee. “The creative writing has inspired more creative writing,” Bishop enthuses. “Since I’ve been promoting this record, I’ve gotten all these opportunities to write other things. I did a piece in Sports Illustrated for Father’s Day — my first published piece in a real magazine! My stepdad was a college football coach, and I grew up working the sidelines with him, so I wrote a piece about how working on the sidelines of college football made me tough enough to survive the music business.”

Like any artist — or football player — Bishop knows the importance of surrounding herself with a good team. “I joined BMI in 2002 and have stuck with them all these years because I have such awesome support from the Atlanta, Nashville and New York City offices,” Bishop says. “My BMI relationships have led to countless opportunities to perform at festivals and radio events around the United States, as well as helped me connect with other established writers and publishers within the industry. I am forever grateful to the folks at BMI who have championed my music and invested in me personally — I wouldn’t be here without them!”