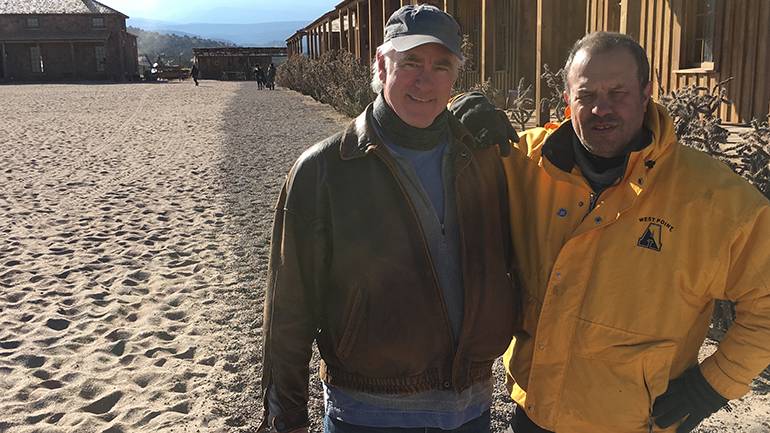 Without a doubt, Larry Groupé’s impressive resume features both critical praise and popular acclaim for the music he’s written for film and television. Nominated for a primetime Emmy in 2004 for best original score for ABC’s drama series, Line of Fire, he also wrote the score for the highly regarded political drama, The Contender, which was written and directed by his longtime collaborator Rod Lurie. The film received multiple Oscar nods and led the pair to Commander in Chief, which became the number one most successful new TV series when it was launched by ABC in 2005. Also directed by Lurie, Groupé added his unique musical touch to Nothing but the Truth, a compelling political drama about first amendment rights. The highly versatile Groupé also took home Emmys for best documentary score for Jonas Salk: Personally Speaking, and Residue, a short subject film about the U.S. early involvement in Cambodia.

Beyond the screen, he has worked with classic rock legends YES, with whom he co-composed ten original songs for their CD Magnification, and wrote overtures, arrangements, and conducted the orchestra on their Symphonic Tour of the World. On that front he’s composed, conducted and produced over eighty CD recordings, with his music performed by a number of symphony orchestras.

Now, he’s embarked on another journey with Rod Lurie - the war film The Outpost, based on a true story, starring Orlando Bloom, Scott Eastwood and Caleb Landry Jones. Inspired by the book written by CNN’s Jake Tapper, the film is becoming a timely and heart-wrenching blockbuster.

BMI caught up with Groupé to talk about this new project and his part in creating the sonic backdrop that is the backbeat of the compelling story, including the creation of the song “Everybody Cries,” which is exactly what one does when hearing it. This is what he said.

Tell us a bit about The Outpost. How did you get involved and what drew you to the story?

I came to The Outpost via director Rod Lurie, for whom I have written almost all of his scores, so we have a long working relationship. I was certainly drawn to this true story because I had CNN Anchor Jake Tapper’s book. So, I immediately knew this would be a most dramatic and heroic human story of valor and heroism.

In composing the score, tell us about your creative process and what helped you convey the essence of the movie. What were you trying to get across to the audience?

We made a decision that the design of the score was not to be like an action picture; I wanted to concentrate on the stress and camaraderie of the rank and file soldiers. So, the score resides when they are together, like being hunkered down in a disabled Humvee under fire and how they treat each other and their decisions on how to survive. Rod Lurie did not want me to write all out action cues. Must of the score is a combination of sound design and synthetic elements, but orchestra is embedded in there too.

Talk about working with your longtime collaborator, Rod Lurie. What makes your relationship work so well and what tips would you give aspiring composers who want to establish similar relationships with directors?

I am very lucky to have a long term composer/director relationship with Rod. Some of the reasons for that is, well, he has to actually like my music and see it as a custom fit for his kind of storytelling, also I will rewrite and often do, anything that’s not a 100% hit for him, so he likes my work ethic. But the biggest aspect, I think, as far as continuing together, is that I reinvent myself for every project. There is no relying on what worked in a previous project, everything always starts from ground zero, every-time. This is what I would say to emerging composers…. Be willing to change anything in your music that the director does not find working, be sure and have emotional discussions about what is and what is not working. Do not talk about instruments, orchestration or cool synthetic plugins, ONLY talk about the story and character arc.

The song, ‘Everybody Cries,” which rolls at the end of the movie, is a collaboration between you, Rod Lurie and Rita Wilson. Tell us a bit about that and how it all came together.

This is a very emotional subject. While Rod was in Bulgaria on location he got a call to rush home because his son Hunter was dying, and if he wanted to hold his hand he better get on a plane now. I can’t even imagine the 20 hours of travel he then went through wondering what was happening. He did make it just in time to hold Hunter’s hand. Then his daughter said… “Dad, you have to finish this movie, do it for Hunter.” Rod then got back on a plane and then he wrote “Everybody Cries.” He sent me a voicemail of the lyrics and delivered the words in a rhythmic way that I could then fashion a melody and devise the musical underpinning for the song. We were fortunate to get Rita Wilson to sing it and she brought her own unique delivery to the song, as well as lyric enhancement, and voila we have a very impactful song!

You’ve done documentaries as well as feature films and TV. How does your approach change for true stories as opposed to fiction?

Actually, it doesn’t change much at all. Whether The Outpost was real or fiction it would still have the same story arc. In documentaries, the scores are often very low key because they are supporting usually a lot of talking heads discussing the topic of the film, there is not a lot of room to expand the musical palette. I find in the documentaries I have done that I still approach them as feature films, and I do, indeed, elevate the storytelling and information being given us so I don’t hold back, nor am I asked to. I do not believe in the old adage a good score is one you never notice.

What, of everything you’ve done, has been the most rewarding and why?

This is always hard. Usually the answer is whatever I just finished. But I will say that The Contender, my first big film with Rod, is always dear and special. There is something timeless and so sincere about that film. I really like the score that came from it and just love the story.

Right now, I am doing a small indie called The Guitarman about a Bay Area music teacher that tries to help a tough inner city school, as well as San Quentin prison inmates, keep their lives in focus with music.

I chose to join BMI because other composer friends highly recommended it. BMI did a lot to help showcase my early work and to support me and career; I am very happy I made that initial choice!