Posted in MusicWorld on November 20, 2012 by Dave Simons 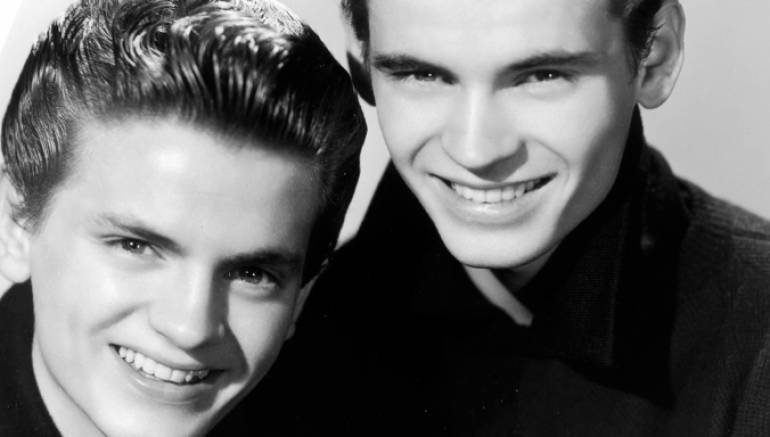 “The first time I heard the song ‘Bo Diddley’ in 1955, it just nailed me,” recalls Kentucky native Don Everly, one-half of the monumental early rock duo the Everly Brothers. “I remember thinking, ‘I’ll never be able to have that type of rhythm in any kind of country music.’” By experimenting with a similarly brisk strumming style for acoustic guitar, however, Everly inadvertently stumbled upon something much closer to the excitement of rock & roll than the stiff rhythms he’d been accustomed to playing—particularly when using a Gibson jumbo tuned to open G.

“Early on our dad had showed us the open-G tuning,” younger brother Phil continues, “but we also had an Aunt Hattie who used to play this song called ‘The Drum Piece’ that had the same kind of tuning. So it was around us a lot. The thing is, you have to be able to figure out where to go once the guitar’s set up like that. Fortunately, Donald became quite good at it at an early age.”

One of Don’s earliest originals to feature open G was “Give Me a Future,” its intro directly inspired by the Bo Diddley rhythmic sound. Unfortunately, “Give Me a Future” didn’t exactly point to a bright future in the record business—nor, for that matter, did any of the other tunes in the brothers’ catalogue at the time. Columbia Records had dropped the duo after just one unsuccessful single; by the start of 1957 Don and Phil, then just 17 and 19 respectively, were considering leaving the Nashville scene altogether. Enter guitarist/producer Chet Atkins, a longtime acquaintance of the boys’ dad, renowned guitarist Ike Everly. Atkins had long been a key supporter, plugging the boys’ songs and offering advice and support along the way. Eventually Atkins was able to convince Archie Bleyer, owner of the small Cadence label, to give the Everlys another shot.

Meanwhile across town, husband-and-wife songwriting team Felice and Boudleaux Bryant were busy racking up a stream of country hits for the likes of Little Jimmy Dickens and Carl Smith. As it so happened, writing songs with end-to-end harmony was one of the Bryants’ specialties.

“Everything we were writing in the beginning was duet-able,” the late Felice Bryant told me in a 2002 interview. “Boudleaux was a harmony freak—he loved it. One of the songs he came up with in that vein was ‘Bye Bye Love,’ which he thought would be great for this country duo named Johnnie & Jack. We had no idea about the Everlys at that point.”

Though it would ultimately become one of the most successful entries in the Bryant catalog, “Bye Bye Love” was initially turned down by dozens of artists. With no takers in sight, the song was finally offered to the Everly Brothers on the eve of a March 1, 1957 recording session at the Methodist Television, Radio and Film Commission, RCA’s temporary rented studio located on 1525 McGavock Street in Nashville. For the occasion, Atkins enlisted the services of drummer Buddy Harman and bassist Floyd Chance, as well as rhythm guitarist Ray Edenton, who would spend the next several years as Don Everly’s studio sidekick. “Don came in with that big Gibson jumbo guitar,” remembers Edenton, “and I had my Martin D-18, which I preferred for recording because it didn’t have a booming bass sound.”

If “Bye Bye Love” was the perfect vehicle for the boys’ singular brand of brotherly harmony, it was the song’s intro that sealed the deal. As an experiment, Don suggested grafting the opening riff for his unused “Give Me a Future” onto the Bryants’ composition. “Don just came in and banged out that intro,” remembers Edenton. “It was an incredibly innovative sound.”

Incredibly enough, “Bye Bye Love” took off like a rocket, reaching Number One on the country charts and making it into the Top 5 on both pop and R&B surveys as well. “Without that intro,” notes Phil, “who knows what would have happened? Once Don came up with that, we were off.”

Life under the Bryants’ roof became a bit more accelerated as well. “We’d just moved into our new house, and it hadn’t been carpeted yet,” recalled Felice. “And the acoustics were fantastic in that living room. Boudleaux was sitting there with a guitar and was going for a gimmick, like the one Don had come up with at the front of ‘Bye Bye Love.’ So he started playing that brisk rhythm and then just came out with, ‘Wake up, little Susie, wake up… .’ And I just burst out of the bedroom and said, ‘That is great!’ And we finished it right there.” The ultimate ode to teen angst ’50s style, “Wake Up Little Susie,” also recorded at the McGavock Street studio, reached Number One on all three charts in the fall of 1957 (despite being banned in Boston).

A flurry of Bryant-penned singles followed in 1958, including “All I Have to Do Is Dream,” “Bird Dog” (both chart-toppers) and “Problems.” By that time the Everlys had relocated to RCA’s newly constructed Studio B at 1610 Hawkins St., becoming one of the first acts to contribute to the soon-to-be-famous “Nashville Sound.” Though Studio B was roomier and acoustically superior to McGavock Street, sessions were still tracked live using a mono machine and a remarkably simple miking arrangement: one Neumann U47 condenser for both Don and Phil’s vocals as well as Don’s acoustic guitar (Phil, by and large, didn’t play on the sessions); a single mic divided between guitarist Edenton and bassist Chance; and one mic each for drums, piano, and lead guitar.

Not that the one-mic method deterred Don any. “Back then when Don would go to do one of his riffs, he’d just hold his guitar up higher!” says Edenton. “And I would help him out by doubling his part. But everything was going down live, and this was even before the number system came in, so it was all from memory. And if you made a mistake, everybody had to do it over…and they would definitely frown upon that.”

For Phil, microphone economy was nothing new. “Up to that point we’d been using only one mic for the live shows anyway,” notes Phil. “If we needed to add more guitar in places, our engineer Selby Coffeen would just roll up the fader, and then quickly bring it back down. You can hear that on ‘Problems’ especially, or any of those guitar-riff songs. It became like an effect.”

If anything, the technical constraints helped make the Everlys masters of recording efficiency; during that early period, final takes were typically achieved in five tries or less. “It was just a great situation,” says Don. “We had the top Nashville session musicians, and we’d come in with the ideas, the arrangements already figured out, and we’d just go in and get it done.”

Additional hits would follow, including originals “Cathy’s Clown” and “So Sad” (both from 1960). In 1983, a triumphant reunion concert at London’s Royal Albert Hall ushered in a prolonged period of touring activity for the brothers. Though they valiantly attempted to reignite their recording career during the ‘80s, Don admits that the live urgency that marked the EB’s earlier work wasn’t something that could be easily replicated in the modern multitrack era. Following the release of 1988’s Some Hearts, the brothers exited the studio, never to return. “We just decided to let it be,” says Don philosophically. “Because nothing is as simple as it once was.”