Posted in MusicWorld on May 10, 2018 by Malcolm Venable 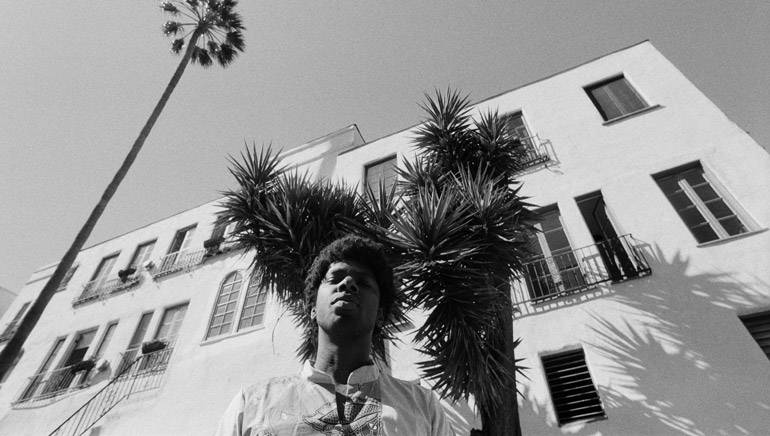 Curtis Harding once described his music as ‘slop n’ soul’ – a name that’s as unusual as it is entirely fitting. Harding, whose intoxicating albums Soul Power (2014) and Face Your Fear (2017) blend soul, rock, blues, funk, punk and more, is himself a pastiche of wildly diverse influences: as a kid, he lived a nomadic life, traveling across states in a van while playing music in the family gospel group helmed by his mom. By the time he settled in Atlanta, Harding’s fate as a musician was sealed, and a talent for rapping led him to meet Cee-Lo Green in the early 2000s. Rapping and co-writing with Green led to touring with him on the Smokin’ Grooves tour alongside The Roots, Lauryn Hill and others in 2002; by the latter half of the decade, Harding had moved to Toronto to seek some inspiration, fell in love with the guitar, returned to Atlanta and rediscovered the gospel of his youth. That influence, as well as the blend of other sounds accrued in his travels and experiences, bursts through in Harding’s music, particularly in the passionate, muscular vocals on Face Your Fear, which landed on many critics’ Best of the Year lists. Currently touring Europe and preparing for a new album, Harding – now a bona fide rock star who’s appeared in an Yves Saint Laurent campaign and on Sundance’s Hap and Leonard – talked with BMI about growing up in a band, the evolution of his creative process and the ever-expanding influences that make up his delicious soup of sounds.

What was it like having a parent as a musical influence? How much of your own work and creative process do you attribute to your experiences touring with your mom?

Music for me in the beginning – I was not necessarily being forced to do it, but it was something we just did. It’s very natural and organic… being that my mom was a gospel singer the messages behind it, when I got older I didn’t necessarily agree with everything that was being put out. But I’ve always loved the music, so there was always that struggle of finding your own identity and trying to understand exactly what it is that you’re doing. Now my sentiment is, as long as music provokes an emotion, good or bad – if it makes you feel happy if it makes you feel sad – then it’s doing its job. If it makes you think, makes you feel, you know what I’m saying? So, as a kid I was very confused in that regard, but looking back on it as an adult I appreciate all of that. I know that it’s kind of brought me to where I am now – the music is there to provoke an emotion.

You need to be honest. My mother was being completely honest where she was and what she was doing. She might not have always been right, but she was honest, and it worked out, if that makes sense. I don’t feel like parents should ever force their kids to do anything but my mother obviously saw something in us – all of my sisters and whoever else that we didn’t see. So she imparted that gift. She curated that natural instinct that was there and the talent that was there. I appreciate it and I love my mother for it. My mother’s one of my best friends now. That’s kind of a long, deep answer (Laughs). I could have been like, ‘It was great!’ Just like any other teenager, any other kid, you don’t really understand what’s going on at the time. We practiced all the time. We had to be in church, on the streets. We sang to homeless people. It was a lifestyle. But it was just something we did – I didn’t see it as a career path.

You cut your teeth in the early 2000’s working with Cee-Lo Green and touring with modern legends including The Roots. What did you retain from those years and what info have you updated?

Performance wise, I learned how to perform and sing with others. As far as working with Cee-Lo, I did a lot of studio work with him so I learned how to write songs honestly and openly. He always stressed not to oversing a song. You could be a really good guitar player and just overplay something. You just have to play the right notes. Whatever’s best for the song. And if that means taking yourself out, then you take yourself out. So that’s what I learned.

Your music evokes an era that was intensely political. Is that something you think about, particularly today?

We’re forced to think about politics now in the era we live in. You can’t help but think about it. When I’m writing songs, I don’t have a certain agenda, other than to be honest and tell where I’m at. If some of that (politics) happens to come out, then it does, but that’s not my goal. My goal is for me to make the best song possible, because I make music for me first. If I dig it, then I feel like someone else will. It’s still got to be fun. It can’t be one way all the time. We need to escape, with a lot of what’s going on. People still need to remember life is still here and worth living. [It helps to] find a community of people you connect with. That’s where it starts, it starts within your community. The world is a big place, of course, but you can also start your own revolution; you can enjoy where you are. Even though the world is in chaos you still have to remember that we’re alive and you’re living.

You have a distinct, well-defined point of view. What is the collaborative process like for you?

I have to vibe with you. I don’t like walking into a situation and immediately start working. I like to catch a vibe and see if we connect on some level. Of course, you have to connect with someone musically. I generally prefer we have similar taste and ideas. But, if we can connect on something that happened in our life then that’s one way. And then the other way is if you’re just a great musician you have something I can learn from, or maybe you you can learn something from me. That’s what makes a good collaboration.

How has your writing and recording process evolved over the course of your albums?

No particular ritual in making music or writing. Just because something might hit you while you’re walking into a store, or you’re driving. There’s no method to the madness, man, you do whatever you can, you use whatever is at your disposal. You might be in a situation where you don’t have any instruments at all. Sometimes I just take my phone out and I sing something, a melody or line and record it and come back to it. Sometimes it’s months later, like ‘Oh there’s something there,’ and you just build off that.

As far as writing, I just try to be as honest as I can. And also, try to make it appealing to me first. If I dig it, then it’s cool. But one thing I learned about pop songs, if children will sing it and repeat it, it might work. (Laughs.) It’s almost like nursery rhymes. All kids sing, it’s just that at some point you just stop. So, that’s one way to know: if the kids like it, go for it. And they’ll tell you too: I don’t like that. They’re straight up. There’s definitely been an evolution. I can’t tell you verbatim how it’s completely changed but, it’s different styles of writing. Sometimes you have to write within the sessions. You’re on a time constraint, and you have to sit there and hash it out. But, I try not to force anything. There’s also a kind of, ‘We have to work, we have to get this done.’ I think it’s just a matter of knowing what you do well. And if there’s something you can’t do, try to facilitate the right people in your circle to get the job done. That’s something I swear by. And don’t feel like you have to do everything. Sometimes it’s just a matter of taking yourself out of the equation – letting somebody do their job. Get the right people to do the right job.

You famously moved to Canada to get some new inspiration. What about moving around helps your creative process? What specifically do you get out of it? Have you been moving around lately and if so, what did you see or do and how will that impact your music?

I guess it’s just different sounds, meeting new people, experiencing different cultures, even outside of music, will always add something to you that will be worldly, so to speak, that will provide more universal sound. You may be more open to communication, more open to different culture, so that’s education to me. That’s even better than going to an institution of higher learning. That definitely helps in songwriting. Wherever you are, you just do what they do, you involve yourself in the culture. If you’re in Paris, you eat croissants, you drink Champagne and you hang out with the Parisians. You figure out what it is that makes them move, just observe. Just watch and see how people move.

Have you begun thinking about your next project? What’s on your mind as you’re creating? What, if anything, are you doing differently than before?

Oh yeah, man, I’m always constantly trying to go to the next one. Once I’m done recording something, I’m already on to the next thing. So yeah, I’ve been writing. Something’s on my mind. I prefer to just let that be what it is, keep it kind of ambiguous as far as the writing is concerned. Some of the stuff is straightforward that I write, but I would like to leave it up to interpretation. I hate trying to change what a song means. Songs sometimes can take on a different meaning too, it’s like you write something and go back to it months later and go, ‘Oh my God, this is what I was talking about.’ I’m recording at home. Just trying to get better at being my own engineer. Add to my craft, learning more. Because when you walk in [to a session], you’re able to better communicate with whoever is engineering, or if you’re working with a producer. The more you know, that always helps to kind of push things forward, and it saves times as well too. I’ve been playing bass a lot more, learning new sounds. Just progression man.

What have you valued most about your relationship with BMI?

I guess it seems to be, for BMI, a labor of love. Having to keep track of all these artists, their musical performances – it’s something I couldn’t do. The ways they connect songwriters, they have great seminars, they always send emails about events and ways I could meet different writers, I appreciate it. It’s always needed. It makes you feel good someone is in your corner looking out for you.