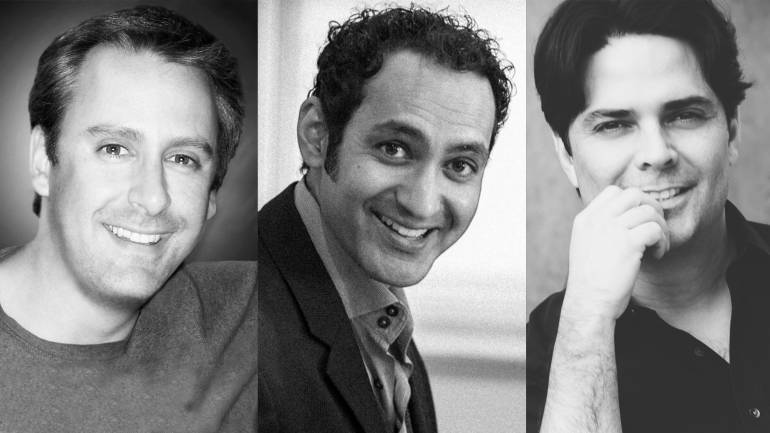 Kevin Kliesch, Vivek Maddala and Tony Morales have more in common than just being composers that BMI is proud to represent. They’re all nominated for Creative Arts Emmys in the same category this year: Kliesch for Sofia The First and Tangled: The Series; Maddala for The Tom & Jerry Show; and Morales for Elena of Avalo. Although all the shows are animated, each composer has his own unique take on how he got where he is and where he’s headed. So, BMI asked each of them to tell us in their own words about their journeys, advice they were given, and what advice they would now give to aspiring composers. Here’s what they said:

You’re Emmy-nominated in this year’s “Outstanding Music Direction and Composition” category. What have you found to be most helpful in building relationships when working with others on a show and how do the various roles intersect with yours?

Kevin Kliesch: For me, it’s been to always take constructive criticism with a smile on my face. I’ve always realized that it’s my music serving both the picture and the interests of the director/producer, so even if I felt like I’d written a great cue but the creative team wanted a change, I would never take it personally. Instead, the best thing to do is just to say, “I’m happy to make that fix.” The team will appreciate that, will recognize you as someone they can work with, and that’s how lasting relationships are made.

As for the various roles on a show, in television animation I usually work with either the director or the executive producer. Early on when I was first starting out on my show Sofia the First, I would have to also interact with the writer of the show, the songwriter, the head of music for the network, the two assistant heads of the network, and the head of the network as well. That was a lot of people to be getting notes from! But eventually that settled down to only about three people, so it wasn’t so bad. On my other show, Tangled: The Series, I feel very lucky that I only have to get notes on each episode of my score from the executive producer. We do a playback in my studio in Valencia and make changes on the spot

Vivek Maddala: The program for which I’m nominated, The Tom & Jerry Show, is unusual in that it’s a music-driven show.  Depending on the episode, there’s little to no dialog and the music largely tells the story. The music I write dovetails with the sound design and effects by Dan Blessinger, and typically we’re addressing different aspects of the show.  The sound design is usually quite direct (e.g., if you see a lawnmower in the animation, you likewise hear one, albeit maybe a comical take on one). In contrast, the music score is more oblique; much of the time I sculpt the harmonies and rhythms to the precise contours of the onscreen action, but the melodies and counterpoint often speak to things not on screen – like unseen character motivations, complex emotional backstory, or implied heightened tension. At this point, the various roles on the show are fairly well circumscribed.  I’ve found that a productive and sensible way to interact with others on the show, whether with the producers, director, sound mixer, etc., is to focus on what will make the show most resonant for the viewers. Essentially, I think everything distills down to the question, “What’s best for the show?”

Tony Morales: It’s a huge honor to be nominated and I’m beyond thrilled at the recognition!  Working on a show is a total collaborative effort. Every department works in tandem to make up the whole. I find that being able to listen and remain open to creative opinions/ideas helps me to build my relationships with the team, in particular my show runners, directors and producers. Music is one of the very last pieces to the puzzle, so I’m always aware of this and do my best to add to or enhance what is already there

What is the best advice you’ve been given and what do you wish you’d known about the industry when you were starting out?

Kevin Kliesch: Before I came out to Los Angeles to pursue my dream of film scoring, a good friend and former teacher of mine who used to be a music editor on some pretty big movies told me, “If you want to do it badly enough, you will.” And that’s always stuck with me. It was basically, “Never give up.” So, I came out to Los Angeles to try to get my break as a composer, but wound up finding work as an orchestrator for the next 19 years. I stuck with it, always hoping my day would come as a composer, and it finally did, after 15 years, on my first television series in 2011. And that leads right in to the next question - I wish somebody would have told me how long it would have taken to get my break when I was first starting out!

Vivek Maddala: There are many commonalities between composing music for a TV show and for feature films. My first film-scoring mentor, Don Ray, once stressed to me how important it is to be emotionally available to the characters and story, because often that’s where you draw inspiration for the music. To score characters and story convincingly, you must come from an honest place inside yourself, which can be emotionally draining because it requires giving so much of yourself. So, the advice was always to keep myself intellectually and viscerally clear and open when composing to picture. On any given day, if you come to the process preloaded with emotional energy (anger, jubilation, etc.), this can pollute your work for that period of time. This may sound elusive, but it’s advice that has always resonated for me.

If I were to advise a composer starting out, I think first I would address scoring logistics:  it’s essential that you write independently, with your own voice, but it can be immensely helpful to have a team of co-composers with whom you can collaborate when necessary. I say this as someone who has always worked in extreme isolation without collaborators — and I wish I had cultivated a flexible and scalable co-composing network early on.

Tony Morales: I’ve been given a lot a great advice over the years but the one thing that has had the most effect on my career was the advice to play to my creative strengths as a writer. Early on I found myself trying to emulate this composer or that songwriter when given scoring assignments. But over time, not to mention after a ton of practice, I started to get more comfortable in my own skin creatively speaking. That has helped me to become a more confident collaborator when working with directors and producers.

I wish I knew when I first started out that this career is a marathon and not a sprint. I was so eager to succeed in my early years and was very hard on myself whenever I felt my career wasn’t where I wanted it to be. But over time, I’ve come to realize the everyone has their own definition of ‘success’ and that with a lot of hard work, not to mention persistence, you can obtain some of the goals you set out to reach.

Kevin Kliesch: I’m currently scoring season two of Tangled: The Series, and we have one more season to go. After that, it’s anyone’s guess!

Vivek Maddala: I’m well into my third season on The Tom & Jerry Show and have about 35 more episodes to tackle by the end of the present season. I’m also scoring an independent comedy film at the moment and will be starting on a dramatic feature later this year (my third collaboration with that film’s director).  I’m also finishing production on an album by a colleague, and I hope to resume live performances later this year.

Tony Morales: I’m in the middle of scoring season 2 of Elena Of Avalor for Disney Television Animation and I just wrapped up season 4, along with co-composer Brian Tyler, of Scorpion on CBS. This coming June will see the theatrical release of An Actor Prepares, a comedy I scored last year starring Jeremy Irons and Jack Huston. I’m also looking forward to some downtime with my family this coming July!