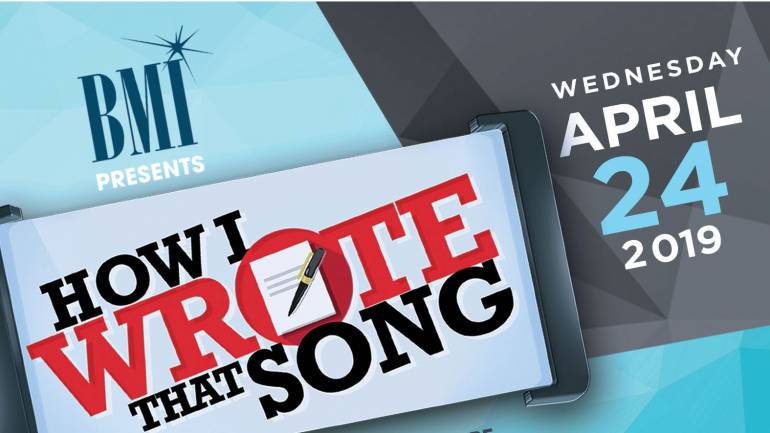 BMI is proud to present its signature panel How I Wrote That Song® at this year’s Billboard Latin Music Week at the Venetian Hotel in Las Vegas on Wednesday, April 24, 2019. This year’s panelists will include award-winning producers Tainy, Luny, Young Martino, Nely and Haze, and will focus on the evolution of Latin urban music. The panel will be moderated by BMI’s Vice President of Creative, Latin Music, Delia Orjuela and Gustavo Lopez, CEO of Talento Uno Music.

For more than ten years, BMI’s panel has served as a platform for Latin music creators to discuss the process of writing, producing and performing their hit songs. Collectively, this group of all-star producers has crafted numerous chart-topping hits and amassed a repertoire of consistent blockbusters, which have helped put Latin music in the spotlight as one of the fastest-growing genres and shaped the golden-era of reggaeton.

Reggaeton producer Tainy was commissioned to produce the 2018 blockbuster “I Like It,” by Cardi B, Bad Bunny, and J Balvin, and Puerto Rican songwriter and producer Young Martino collaborated with Ozuna on the hit “Te Boté,” which held the top spot on Billboard’s Hot Latin Songs chart for 14 nonconsecutive weeks. Luny, of the duo Luny Tunes, established his mark on the music scene as the beatmaker behind iconic hits like “Gasolina” and “Rakata,” and Nely’s contributions as a producer are featured on some of the highest selling albums of the golden era of the reggaeton explosion including Sangre Nueva, King of Kings, El Fenomeno, and El Cartel. Rounding out the panel, Haze has racked up numerous hits alongside urban duo, Plan B. The panelists will narrate the stories behind these and other hits, which have made them some of the most sought-after producers in the industry.

“Our longstanding relationship with Billboard Latin Music Week provides our songwriters and producers a platform to discuss the creative process behind their biggest hits and gives the audience an insider’s look into the craftsmanship of song writing and producing,” said Orjuela. “This year’s group of panelists have played an instrumental role in shaping the evolution of Latin urban music, and we look forward to highlighting their bodies of work.”

How I Wrote That Song® will be held in the Marcello Ballroom at the Venetian Hotel at 3:15 p.m. on Wednesday, April 24. To join the conversation, use hashtag #BMIHIWTS.

Tainy: Notorious producer Marco Masís Fernández, artistically known as Tainy, has become an undeniably influential producer in the Latin music scene for more than a decade. He is part of a group of creatives reinventing today’s urban music. Tainy has been the mastermind and key component behind some of the most iconic global hits, such as “I Like It” by Cardi B feat. Bad Bunny and J Balvin, and “No Es Justo” by J Balvin feat. Zion y Lennox to name a few. In 2018, he co-produced J Balvin’s Latin GRAMMY award-winning album VIBRAS, which includes illustrious hits like “Mi Gente,” “Ahora,” and “Ambiente.”  Most recently, Tainy produced Bad Bunny’s debut album X 100PRE, which reached number 11 on Billboard’s Top 200 Jan. 12-dated chart.  Earlier this year, Tainy collaborated with Benny Blanco, Selena Gomez and J Balvin for the release of his first single, “I Can’t Get Enough,” from his highly-anticipated solo project due out later this year.

Young Martino: Jose Martín Velázquez better known as Young Martino is a producer and performing artist whose distinctive producing style has made him a force to be reckoned with. He has performed at the most iconic indie music festivals, such as SXSW, LAMC and Vive Latino. His work with MC Alvaro Diaz, Joyce Santana and Brray has positioned him as the leading producer in the indie trap movement and opened the door to a new wave of music coming out of Puerto Rico. The young producer has worked on more than 100 recordings in the past two years, including the smash hit “Te Bote,” which topped the Hot Latin Songs chart for 14 nonconsecutive weeks starting May 26, 2018 and entered the top 40 on Billboard’s Hot 100 chart. The song has been certified platinum multiple times, and the remix hit the one billion views milestone on YouTube.

Haze: Egbert Rosa professionally known as Haze is a producer, beat maker and prolific songwriter from Arroyo, Puerto Rico. For the last ten years, Haze has been producing international hits for Anuel AA, Yandel, Plan B, Nicky Jam, Daddy Yankee, Zion Y Lennox, Ozuna, Natti Natasha and more. In 2016, he won a Latin GRAMMY for producing the song “Encantadora” by Yandel, the following year he established his own imprint in association with Universal Music Latin when he signed Jhay Cortez and Juanka. Currently, Haze is promoting his hit “Amanece” alongside Anuel AA, which reached the top of the YouTube streaming charts in 12 countries upon release and surpassed 200M video streams and 500M audio streams. Haze credits his success to hard work and a desire to bring his signature sound to the masses for their enjoyment.

Luny: Francisco Saldaña, known worldwide as Luny of the duo Luny Tunes, is a reggaeton producer notorious for creating unique musical rhythms for some of the most popular reggaeton artists since the early 2000s. Luny Tunes established themselves as hitmakers when “Gasolina” by Daddy Yankee became a worldwide anthem. In 2005, they released Mas Flow 2, a landmark album for the reggaeton genre spawning world renowned hits such as “Rakata” and “Mayor Que Yo,” among others. His signature production style has carried over to current hits like “Duele El Corazon” by Enrique Iglesias; “Mayor Que Yo 3” by Daddy Yankee; Don Omar and Wisin y Yandel; “Limbo” by Daddy Yankee, and pop-influenced tracks for Farruko and Don Omar.

Nely: Josias Gabriel De La Cruz, better known as Nely “El Arma Secreta,” was born and raised in Carolina, Puerto Rico. He began pursuing his dream of becoming a producer at the age of 14; around that same time he approached major producer Luny with his demos and was immediately was signed to Luny’s label Mas Flow. By the time he was 17 years old, he established himself as one of top producers on the Latin urban music scene and work side-by-side with hitmakers, such as Don Omar, Zion y Lennox, Daddy Yankee, Wisin y Yandel, Hector el Father, Tito el Bambino, Arcangel, Nejo y Dalmata and many more.  During the golden era of the reggaeton explosion, his contributions as a producer are featured in the highest selling albums of that time including Sangre Nueva, King of Kings, Motivando A La Yal, El Fenomeno, and El Cartel, among others. In 2007, Nely founded his own record label Artillery Music. He now focuses on finding and developing new emerging talent with his production team “Artillery Music & EL Nuevo Orden.”