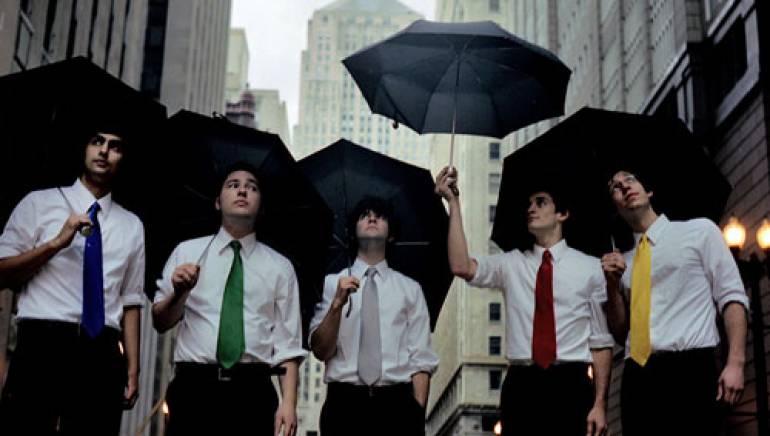 25 Miles Northwest of Detroit resides one of the world’s largest museums of arcade machines, collectible curiosities, and mechanical antiques. The sprawling exhibit houses everything from coin-operated fortunetelling machines of the 1920s to the latest high-tech video games; from model airplanes to P.T. Barnum’s legendary Cardiff Giant; from vintage fans to rare neon signs. It is here that Tally Hall found much inspiration for their 14-track debut, Marvin’s Marvelous Mechanical Museum. Both the album and its namesake combine seemingly disparate elements, drawing across decades to form surreal but cohesive collections. In Tally Hall’s case, the results are quite catchy.

Often recognized by their trademark ties—Rob (yellow tie-vocals/guitar), Zubin (blue tie-vocals/bass), Ross (silver tie-percussion), Joe (red tie-vocals/guitar), and Andrew (green tie-vocals/keys)—Tally Hall began in 2002 when Andrew met Rob through friends. Andrew, the only member not originally from Michigan, began writing songs when he was eight years old and eventually headed to the University of Michigan to study composition. There he met Rob, who attended high school with Zubin and joined Joe’s film production group. When Tally Hall’s original drummer left the band, they recruited Ross, who went to high school with Joe.

While Andrew was the only member to study music formally, Rob and Joe proved accomplished songwriters with similar desires to start a band. They worried less about stylistic boundaries than about fulfilling their creative potential. Joe describes it this way: “We don’t like the idea of limiting ourselves to one genre because there’s no point in doing that. If a certain idea requires a certain sound then why limit ourselves?” Accordingly, Mechanical Museum is spacious, intimate, hilarious, serious; disparate and seamless all at once. It’s the natural result of having three songwriters, four vocalists, and five capable musicians in one band, as well as their common interests in the The Beach Boys, Queen and more recent artists like Arcade Fire and Sufjan Stevens. “We listen to everything and we try to take ideas from different genres and broaden the span of what people perceive as rock music,” says Andrew. “The song wouldn’t be the same if all of us weren’t involved.”

Early on, Joe filmed a surreal music video for the calypso-tinged “Banana Man.” The video appeared on the internet humor site Albino Black Sheep (www.albinoblacksheep.com), drawing new fans to the band’s website. “We didn’t really realize what was going on outside of Ann Arbor,” says Ross. “Then our website started crashing each month from the bandwidth and it became obvious that there were people outside of Ann Arbor that were listening to the music.” To date, the video has been downloaded over two million times.

Andrew’s song “Good Day”—the first he wrote for the band—heralded further success for Tally Hall, as it was not only featured on Fox’s hit series The O.C., but also won Andrew the BMI/John Lennon Songwriting Scholarship, and a meeting with Brian Wilson. “Good Day” introduces the band by traversing their broad stylistic spectrum within a few minutes. A concise opening piano gives way to momentary rock bombast, before dropping back into a verse newly adorned with expanded instrumentation. By the end of the song we’ve heard an interlude that would make Freddie Mercury sweat through his body suit and a gather-round-the-piano sing-along that references the Beatles without imitating them.

Tally Hall has appeared with OK Go, Nightmare of You, World Party, and Fastball, among others. This summer will provide more opportunities to catch the band’s compelling live show, though they’ll also be using the time to write new songs and get a handle on their devoted and obsessive fans. “We’ve had people travel halfway across the country to see our shows,” says Andrew. “We just assume that most bands have their fair share of loyal followers. Ours are just a little more…proactive.” With so many fans mulling over everything from song lyrics to which members are single, why the modesty? “In the end, if someone likes us because we are funny, then I think we have succeeded in a way. But, if someone appreciates us because they understand us, then I think we will be truly satisfied,” Zubin explains. “We’re not a band that has a lot of pretenses,” says Rob. “As long as people like the music, that is the main thing we’re concerned with, and whatever they take from it, at least they’re taking something.” Whatever it is that Tally Hall is giving, they’ve got enough to go around.