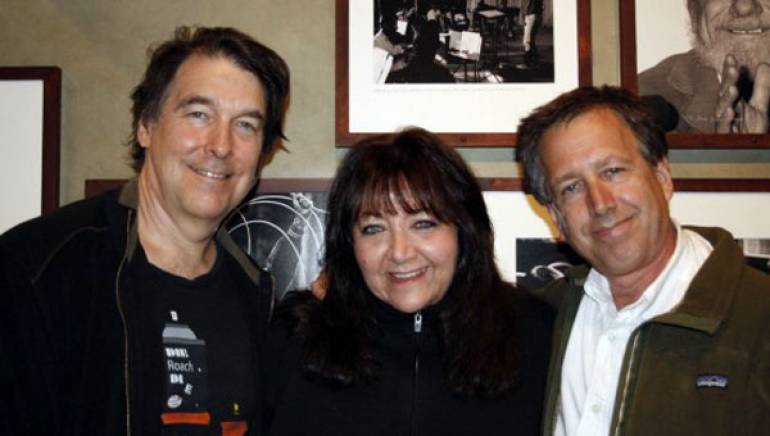 Award-winning composer and Lab advisor David Newman, Lab advisor Doreen Ringer Ross and Sundance Institute Film Music Program Director Peter Golub pause for a photo during the 2009 Sundance Composers Lab. The trio is standing in front of a shot that captures Newman conducting at the Lab in the 1980s. The 2009 session marked Newman’s first return to the Lab since he oversaw it from 1986 to 1989. Photo: Chelsea Ross

Six composers have been selected as Fellows to the Sundance Institute Film Composers Lab taking place at the Sundance Resort in Utah from August 11-26, 2010. This year’s Composers Lab Fellows are Sherri Chung, John Hancock, Mark Orton, Arturo Rodriguez, Kareem Roustom, and Rani Sharom. During the two-week Lab, Fellows participate in workshops and creative exercises under the guidance of the industry’s leading film composers and film music professionals.

The Composers Lab Fellows also collaborate with filmmakers from the Sundance Institute Feature Film Program to explore the process of writing music for film and to create accompanying scores for scenes shot during the Feature Film Program’s Directors Lab. The program aims not only to give the composers first-hand experience working on film music, but to give the directors insight into the process as well.

“The music in a film is an incredibly important part of the storytelling, and there are very few opportunities, without the pressure of production, for composers and directors to learn how to work together,” said Peter Golub, Director of the Sundance Institute Film Music Program. “The Composers Lab gives emerging composers and filmmakers a creative haven to experiment and collaborate on creating a musical score for a film.”

The composers selected for the 2010 Sundance Institute Composers Lab are:

SHERRI CHUNG
Sherri’s credits as a composer include Let’s Make a Deal, One Day, Turning, How to Protect Yourself from Zombies, and Insomnia. She is an accomplished pianist and winner of a 2009 BMI Scholarship for Scoring Motion Pictures. She won Best Score at the 2006 NYC Movie Making Madness Competition.

JOHN HANCOCK
A Salk Lake City resident, John has written for television and radio and also worked as a producer for the last 15 years. Current projects include work with DJ/artist Kaskade, Kurt Bestor, and David Archuleta. He is a founding member of the electronica group, Late Night Alumni, now putting together their third album.

MARK ORTON
Mark studied at the Peabody Conservatory, served as chief engineer at The Knitting Factory, and has worked with Laurie Anderson, the Kronos Quartet, John Zorn, Bill Frisell, The Lounge Lizards, and others. He was a member of Tin Hat Trio, based in San Francisco. He has served as arranger for Madeline Peyroux and Norah Jones and written dance scores for Pilobolus, Donald Byrd and others. His music is heard in films such as The Good Girl, The Real Dirt on Farmer John, and The Loss of Teardrop Diamond.

ARTURO RODRIGUEZ
Winner of Mexico’s Mozart Medal, Arturo is a composer and conductor for film and the concert hall. He has been commissioned to write music for The Kennedy Center Imagination Celebration, the ProArte Chamber Orchestra, the US Army Field Band, and others. He recently composed the film score for the Mexican production, Cuando las Cosas Suceden.

KAREEM ROUSTOM
Born in Syria, Kareem has written for artists ranging from the Philadelphia Orchestra to Shakira. His score to the documentary, Encounter Point, earned him Best Musical Score Award at the 2006 Bend International Film Festival. He also scored Amreeka and Budrus. His concert works have been performed by The Firebird Ensemble, In Flux, Apple Hill Chamber Players, Slovak Radio Orchestra, Zurich Chamber Orchestra and others. An oud player, he arranged strings for the Shakira and Beyonce duet “Beautiful Liar.”

RANI SHARONE
Rani scored his first feature, Common Bonds, which premiered at the 1997 Sundance Film Festival. He has also written TV commercials (Nike, MGD), is a session bass player, and studied at USC. He recently scored the feature, Caller ID and Eye to Eye, a short that played at the LA Shorts Festival. His band, Stolen Babies, has been actively touring and recording.

Sundance Institute
Founded by Robert Redford in 1981, Sundance Institute is a not-for-profit organization that fosters the development of original storytelling in film and theatre, and presents the annual Sundance Film Festival. Internationally recognized for its artistic development programs for directors, screenwriters, producers, film composers, playwrights and theatre artists, Sundance Institute has nurtured such projects as Angels in America, Spring Awakening, Boys Don’t Cry and Born into Brothels.