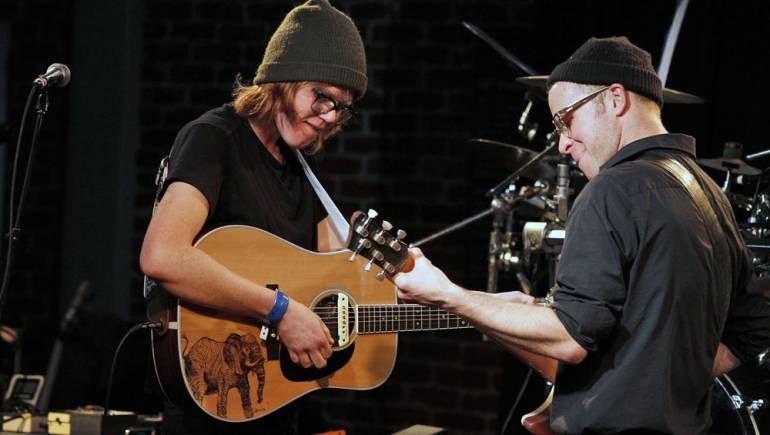 Time to take a look at what happened in the music biz – for the week ending Jan 28 it was all about Sundance, composers, new artist Allen Stone, and indie band Holy Water Buffalo.

This week was all about Sundance for me. I turned a blind eye to the continued lay-offs in recorded music, MySpace’s digital woes and the was-or-was-not music confab Midem well-attended debate. I did pay attention to the Oscar noms and was bummed Diane Warren, who won the best original song Golden Globe for “Burlesque,” didn’t get a nod. I was also amused by the “Glee” vs. Kings of Leon war. Otherwise, I packed my Uggs, and headed to Park City, Utah.

I have always been a massive fan of film music. It is truly one of the greatest arts and the ultimate marriage of image and sound. So Sundance was like a wonderland for me. I was lucky enough to score a coveted invite to BMI’s “seat-switching dinner” hosted by the performance society’s vp of film and TV relations, Doreen Ringer Ross held at Zoom. This may sound shocking, but composers and directors are not the most social lot, so Doreen conspired a way to get everyone to mingle – the 50 plus guests had to change seats and tables after each course. Genius!

I had a wonderful chat with my new favorite composers iZLER, who was at Sundance for the film “On the Ice” directed by Andrew Maclean (one of the films I saw and loved at the fest). We both share a semi-obsessive love of “The Wire.” I also got to chat with Eric Johnson, who I once met many years ago while he was on tour with The Shins. He’s seamlessly made the transition from rock band to film composer (he also fronts the band Fruit Bats) and was raving about working on “My Idiot Brother” directed by Jesse Peretz.

During the main course I sat next to Gingger Shankar, who told me all about her new pop album and scoring “Circumstance.” I first met Gingger right before she went on the road with Smashing Pumpkins (she is the only woman in the world who has mastered the 10-string Double Violin). Over dessert, “Dexter” composer Daniel Licht confessed that he has used real human bones as percussion instruments for the score. How amazingly cool and totally grotesque is that! (Stay tuned for an entire blog, and possibly video on this theme.)

Kudos to Doreen for putting on a great dinner. (Also see The Comet’s coverage of the BMI composer/director panel).

In addition to swimming in composer talent, musicians of all walks came to Sundance in droves.

Famed pedal steel guitarist Robert Randolph and the Family Band had the house up and dancing, hooting and hollering at BMI’s “Snowball.” I also got to see one my favorites, Brett Dennen, who I swear just keeps getting better and the timeless poet/singer/songwriter David Poe. But who really stole my heart was Allen Stone. He looks like a hippy from Seattle (which he kinda is), but he sounds like Stevie Wonder and Prince had a child. He blew the audience away and got a standing ovation. This is one to watch. He’s a star.

Even after all this the night was young. So Hunnypot Unlimited guru John Anderson dragged a bunch of us to a local dive bar called The Spur where he was co-sponsoring a showcase of some indie bands.  Now when I say local dive bar, I mean local dive bar, I am not talking in hipster code. The cliental featured a few mountain men, an androgynous looking bloke high on LSD, a few hookers, some head-bangers, a sprinkling of Sundance refugees and of course John Anderson and his posse imbibing very watered-down drinks. All this being said, the band blew my mind. This rock band from Heber, Utah called Holy Water Buffalo shreds. It takes a lot to get people to dance, it takes a lot of people to dance to rock, it takes a lot to get people to dance in a small dive bar in Park City. Everyone was dancing (especially the LSD guy). This band’s members looked like they were hardly drinking age, but I swear they sound like the Kings of Leon should sound with a wall of guitar that reminded me of early Jane’s Addiction.  The band is not polished and they are not good-looking, but if The Comet had a label, I’d sign them. I even bought a CD.

Thank you Sundance. Thank you for the music.