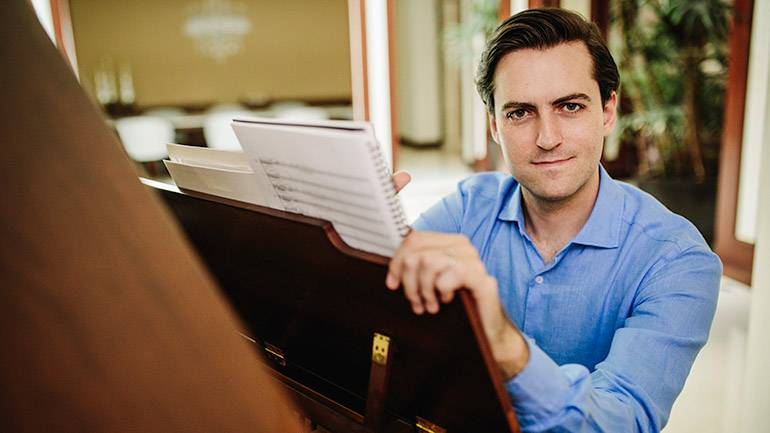 Juan Pablo Contreras is a shining example of why BMI bestows its Student Composer Awards to promising classical composers. It was not that long ago that Contreras won BMI’s William Schuman Prize for his piece, ”El Laberinto de la Soledad.” True to the intent of the accolade, he has continually demonstrated that the esteemed judges who reviewed the hundreds of anonymous submissions to the competition made the right choice.

Contreras has since received commissions from the Los Angeles Chamber Orchestra, The Riverside Choir, Carlos Prieto, and the Onix Ensamble. He has also won several other awards including the Presser Music Award, the Jalisco Orchestral Composition Prize, the Brian Israel Prize, the Arturo Márquez Composition Contest, the Dutch Harp Composition Contest, the Nicolas Flagello Award, and the Young Artist Fellowship of Mexico’s National Fund for Culture and the Arts. Contreras has also served as Composer-in-Residence at the soundON Festival of Modern Music in San Diego, the Cactus Pear Music Festival in San Antonio, and at the Turtle Bay Music School and the Concerts on the Slope in New York. Now he’s Los Angeles Chamber Orchestra’s “Sound Investment” composer for 2019-20. And as the first Mexican composer to sign to Universal Music Mexico, he has an exciting new album out, Mariachitlán, which you can learn about in this trailer.

BMI caught up with the busy composer to get an inside look at his career journey so far, and a sense of where he’s headed.

You are known for combining Western classical and Mexican folk music in a single soundscape. Does that musical sense come naturally or was it something you set out to do?

My interest in combining Mexican and classical music is something that came pretty naturally since my early composition days. I’ve always been passionate about writing works that tell stories about my native country. Blending the sounds of the Mexican vernacular with the symphonic world allows me to transport the listener to the places where these stories take place. The challenge in doing so lies in finding an authentic and fresh voice when synthesizing these two sound worlds. It’s a quest that I’ve greatly enjoyed pursuing during my career.

Tell us about becoming Los Angeles Chamber Orchestra’s “Sound Investment” composer for 2019-20. How did it come about and what does it involve?

I have been very fortunate to work closely with the Los Angeles Chamber Orchestra on numerous occasions over the past few years. They performed the U.S.-premiere of my harp concerto “Angel Mestizo,” played my string quartet “Voladores de Papantla,” and commissioned me to write them a piano quintet titled “Musas Mexicanas,” which they premiered last season as part of their “In Focus” chamber music series. These wonderful collaborations led me to become their 2019-20 “Sound Investment” composer.

I’m thrilled to take on this role, which includes the privilege to write them a new orchestral work to be premiered in March 2020. And what’s extra special about this commission is that it’s funded by a group of “sound investors” who get to experience the whole creative process of the work — from its inception to its premiere. The orchestra organizes a series of ‘salon’ events where I get to share my initial ideas with the investors, they then join me in a reading/workshop session with the orchestra, and finally attend the dress rehearsal and premiere with me. It’s very exciting to be able to turn the ever-so-lonely process of composing into a more social and collaborative one!

In addition to this premiere, being LACO’s “Sound Investment” composer will also allow me to curate a SESSION chamber music concert with them. SESSION is a new concert experience where LACO musicians work closely with composers and visual artists to present new music in unique venues. So, I’m delighted to make music with the LACO family in all of these innovative settings!

You are a former BMI Student Composer Award-winner, capturing the William Schuman prize. Tell us how you heard about the competition, how it impacted your career as a composer and what’s happened with the winning work since the award.

I was a student at the Manhattan School of Music when I applied to this competition. Nils Vigeland, my composition teacher at the time, encouraged me to submit my master’s degree ‘thesis’ orchestral work titled “El Laberinto de la Soledad.” To my surprise, it won the William Schuman Prize, which was completely life-changing for me. In the span of two years, after having won the award, 10 orchestras in Argentina, Mexico, Venezuela, and the United States had performed it!

“El Laberinto de la Soledad” was then recorded by the Cordoba Symphony Orchestra (Argentina), as part of their DVD titled “Latino,” and most recently by the Jalisco Philharmonic Orchestra (Mexico) in my debut orchestral album Mariachitlán. Winning the BMI William Schuman Prize really established me as an emerging orchestral composer in the international scene, and gave me the courage to continue to explore my authentic voice as a Mexican composer.

You recently signed with Universal Music Mexico as the first Mexican composer to be signed to a major record company. How did that happen? What piece of your music got you there?

In 2016, I won the Jalisco Orchestral Composition Prize, a national competition organized by my hometown orchestra, the Jalisco Philharmonic, with my work Mariachitlán. The prize included a world premiere performance of the work, and during the rehearsal week leading up to it the administration and I sat down to plan a CD recording to include this work, my “El Laberinto de la Soledad,” and my piano concerto “Pirámide del Sol.” A few months later, I was fortunate enough to win three grants: the Presser Music Award, the Jalisco Government Proyecta Grant, and a Mexican Endowment for the Arts grant, that provided us with the funds to make this recording happen!

We assembled a dream team for the album: the Jalisco Philharmonic, conducted by Marco Parisotto, pianist Abdiel Vázquez, and recording engineer Phil Rowlands. Once the album was completed, I met with Universal Music Mexico to explore the possibility of having them distribute it. They liked the project so much, that they signed me on to their label, and recently released my album Mariachitlán worldwide!

During September and October 2019, I will embark on a national tour in Mexico to promote my new album Mariachitlán with Universal Music. Seven orchestras will perform the title track, “Mariachitlán,” in a total of 11 concerts. The Jalisco Philharmonic will offer a special CD release concert, in which they will perform the album in its entirety. Afterwards, I will continue to work on my “Sound Investment” commission for the Los Angeles Chamber Orchestra, and plan the recording of future albums with Universal Music.