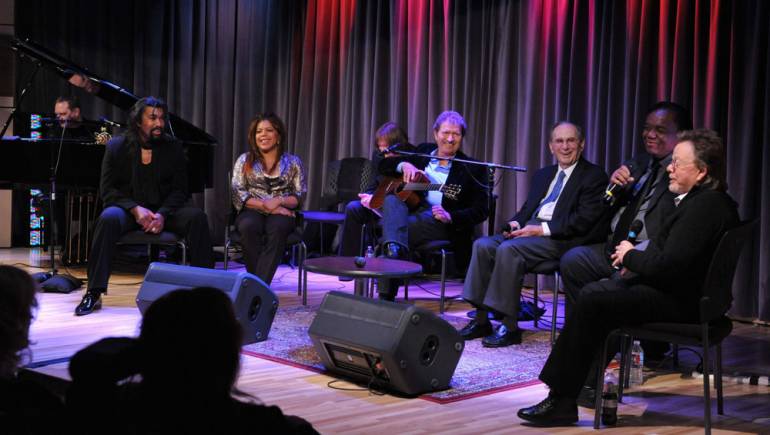 After the ribbon-cutting ceremony to open the Songwriters Hall of Fame Gallery at the Grammy Museum, guests adjourned to the Clive Davis Theatre to witness the first public program offered by SHOF at the Museum.  Dubbed, "Songwriting Legends In the Round,” the show featured performances, recollections and commentary from songwriting greats and SHOF inductees (from left) Nick Ashford,Valerie Simpson ("Ain't  No Mountain High Enough" ), Mac Davis ("In The Ghetto"), Hal David ("Raindrops Keep Falling On My Head") Lamont Dozier (Stop! In the Name of Love") and Paul Williams ("Rainy Days and Mondays"), who also served as moderator.

The New York City-based Songwriters Hall of Fame (SHOF) is taking its history to the West Coast. On Tuesday, October 19, the organization unveiled the new Songwriters Hall of Fame Gallery at L.A.’s Grammy Museum. An interactive exhibit that digs in to the SHOF’s extensive virtual home, the Gallery elevates and explores the men and women who composed the backbone of American music.

That evening, Hal David, Lamont Dozier, Mac Davis, Nick Ashford and Valerie Simpson came together for “Songwriting Legends in the Round,” a powerhouse combination of performances and stories behind the songs emceed by fellow master songwriter Paul Williams. The celebration continued the following evening, as the incomparable Jimmy Webb performed a selection of his compositions “By the Time I Get to Phoenix,” “Wichita Lineman” and “Galveston,” and fielded questions from veteran journalist and music historian Paul Grein during the SHOF’s “An Evening with Jimmy Webb.” On Thursday, October 21, iconic writing team Barry Mann and Cynthia Weil led a SHOF Master Class, during which they discussed the creative processes behind their masterpieces “You’ve Lost That Lovin’ Feelin’,” “On Broadway,” and more.