Posted in The Weekly on January 7, 2020 by Jason Blume 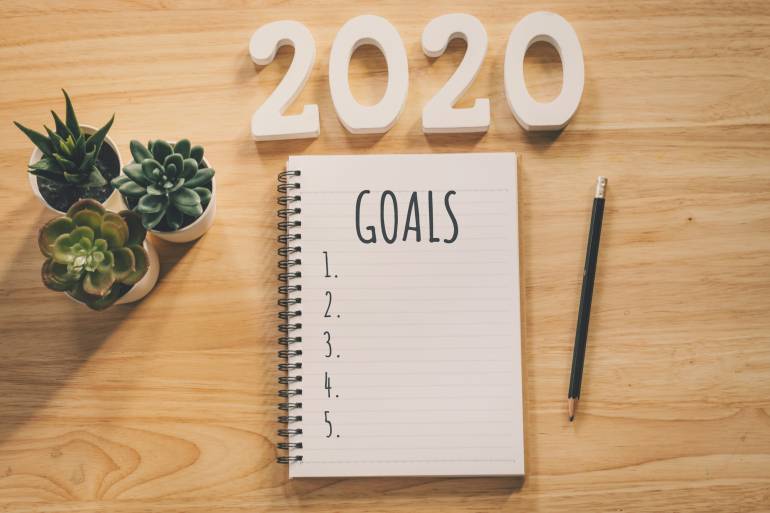 I still vividly recall the days after I had moved to Los Angeles when I was working temp jobs and dreaming of songwriting success. I was certain I would sign a staff-writing deal and have a hit song on the charts within one year. That would be my ticket out of the drudgery of day-jobs and into the creative life I was meant to be living. But I knew that wouldn’t happen by wishing on stars. I would have to take actions.

Saying I wanted to be a hit songwriter was like saying I wanted to be thin (when I still had 20 pounds to lose. Okay … maybe 30.) It was not possible to make that happen overnight. I needed to identify specific actions I was willing to take over an extended period of time and commit to them. The next part of the equation was to remain accountable. I knew that sticking to my weight loss regimen would be a challenge. I agreed to touch base every day with a friend who shared my desire to lose weight, and we encouraged each other to remain on track.

To achieve my songwriting goals, I needed a similar tack. I would have to write songs a publisher believed were stronger—and in some way different—from those his staff-writers could deliver and based on the professional feedback I had been receiving, I was not yet doing that. Time was ticking by and my one-year goal of having a hit song was seeming impossible. Even if I had already written that future hit, I would need to record a demo, which I couldn’t afford. I had no connections to record labels, artists, or producers, so I would probably need to seek a publisher who would pitch my song. It might take months before an artist recorded it and a record label released it—and in the unlikely event that it was slated as the album’s first single it would take time for it to climb the charts. I needed to revise my goals.

During one particularly frustrating temp assignment, I would walk around the block on my break asking the universe to show me the next step—the next action I could take—to bring me closer to the hit records and financial freedom I longed for.

Almost every time I asked for an answer, I would get an intuitive thought that told me what I might do. I needed to plot a course to songwriting success with manageable steps—not pipedreams. In the months that followed these are some of the actions I decided to take:

Each obstacle needed to be faced head-on and overcome. For example, since I could not afford to pay for demos, I found a school where aspiring audio engineers could learn their craft while recording me—at no charge. I also sought collaborators who had home studios where we could record our co-written songs for free.

A goal is nothing more than a dream unless it is accompanied by a plan. I developed short-term and long-term goals and identified the concrete actions I was willing to take in order to maximize my chances of achieving them. For example:

In the next week I will write at least one song. I will not settle for the first melody that pops into my mind, instead trying out multiple melodies and chords until I find the very strongest ones.

My one-year timeline for success took much longer than I anticipated. Seven years after moving to Los Angeles I published my first song. It was recorded by an artist on an independent label and peaked at #63 on the Billboard Hot Country chart. It was eleven years from the time I landed in L.A. before a major artist recorded one of my songs and I signed a staff-writing deal. The recording tanked. You’ve heard of a song having a bullet; this one had an anchor. 5-1/2 years later (a total of 16 years after deciding I would have a #1 single in one year) I had songs on Billboard’s pop and R&B charts—and two on the country chart (one of which was a top 10, earning a BMI Million-Air award.) The actions I took over the years when success seemed one step ahead of me, all kept me focused on my goals, and each small step I took contributed to my finding the success that was waiting.

My prescription: accept that success doesn’t necessarily come when we think it should; identify and take manageable actions; stay accountable; revise your goals and your timeline as needed; and most important—remember that your ability to create music is a gift. Enjoy the ride!

Jason Blume is the author of 6 Steps to Songwriting Success, This Business of Songwriting, and Inside Songwriting (Billboard Books). His songs are on Grammy-nominated albums and have sold more than 50,000,000 copies. He has been a guest lecturer at the Liverpool Institute for Performing Arts (co-founded by Sir Paul McCartney), and at the Berklee School of Music, and has been interviewed as a songwriting expert for CNN, NPR, and the New York Times. For information about his workshops, webinars, additional articles, and more, visit www.jasonblume.com.