Posted in MusicWorld on March 6, 2008 by Dana Rodriguez 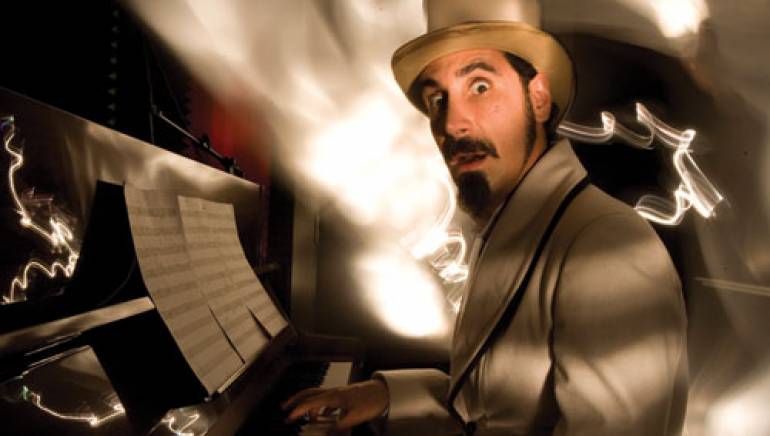 It’s hard to describe the music of Serj Tankian. The System of a Down singer himself even has a tough time.

“It’s definitely a rock record,” the unconventional frontman says enthusiastically. “It’s a moving album with a lot of ups and downs, starts and stops, and tempo changes. It’s depressing but it’s uplifting; it’s jazzy but it rocks.”

The album to which Tankian refers is his solo debut, Elect the Dead, a 12-track set that the former software developer wrote, performed, recorded, produced and released himself on his own label, Serjical Strike/Reprise.

Although Tankian’s sound doesn’t stray too far from SOAD’s politically fused lyrics and heavy guitars, this virtual one-man band effort couldn’t be any more his own. He did, however, borrow drumbeats from bandmate John Dolmayan and former Primus member Bryan “Brain” Mantia, as well as contributions from guitarist/bassist Dan Monti, who also joins him on the road.

The album’s first single, “Empty Walls,” was the No. 1 most-added track at both alternative and active rock radio stations across the country, and has been lodged in the Top 10 since its release in September. Fans are clearly embracing the SOAD leader while the band continues an indefinite hiatus that began in 2006.

Born in Beirut to Armenian parents, Tankian’s family emigrated to Los Angeles when he was 8. He co-founded System of a Down in 1995 with three Armenian friends and went on to sell more than 12 million albums on the strength of such hits as “Chop Suey!,” “Aerials,” “Hypnotize” and the Grammy Award-winning rocker “B.Y.O.B.”

Tankian is currently winding down a mini promotional tour of the U.S. with his Axis of Justice partner, Audioslave’s Tom Morello. Then he heads to Europe with his back-up band, FCC.

“The FCC stands for Federal Communications Commission, the agency that penalizes people, journalists, artists — people that cuss in the press,” he notes. “So I thought it would be cool to make the FCC a cuss word. That way, they can penalize themselves.”