Posted in MusicWorld on May 22, 2008 by Kevin Zimmerman 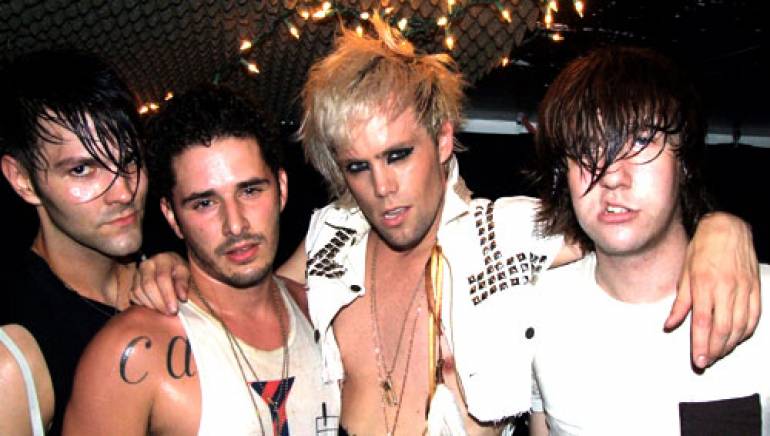 Fans of glam-era David Bowie and Roxy Music, listen up: There’s a new gang in town. Semi Precious Weapons, led by six-foot tall Justin “Precious” Tranter (“six foot, six inches with stilettos,” says his bio), is about to rock your — and everybody else’s — world.

“Semi Precious Weapons is about everyone,” Tranter says. “If you love great rock & roll, if you love glamour, if you love a crazy live show or if you just love a good party, you are welcome and we love you.”

The unexpected amorous passion can in part be explained by the fact that We Love You is the name of the band’s forthcoming debut album on Razor & Tie, produced by Tony Visconti, who not so coincidentally was behind the board for such glam classics as Bowie’s Diamond Dogs and T.Rex’s Electric Warrior.

“I’ve been waiting for this band for 20 years!” Visconti enthuses. “Semi Precious Weapons are just incredible. The songs are powerful, glamorous and, frankly, dirty.”

The New York City foursome — which also includes guitarist Aaron Lee Tasjan, bassist Cole Whittle and drummer Dan Crean — has already made its share of headlines: Named “best band in New York” in a Village Voice readers poll last year, SPW has been called “the most important band in America” by London’s Guardian newspaper and “unashamedly crass and deliciously animated” by British Vogue.

Most of the focus has predictably gone to the singular figure of Tranter, who sells lyrics like “It’s not my fault I look better in her party dress” with a vigorous camp swagger. But his growing influence isn’t limited to rock clubs: Tranter also oversees the rock-inspired jewelry line Fetty, available at Barneys among others, and recently designed a limited edition SPW sneaker for DKNY.

It’s the music, though, that clearly inspires him the most.

“I either think of a great line or image that I want to use and build the song from there or something is going on emotionally in my life that I want to vent about,” he explains about his songwriting process. “Either way, I always try to write as honest as I possibly can … even if I lose a friend or six.”