Posted in MusicWorld on December 1, 2011 by Ellen Mallernee Barnes 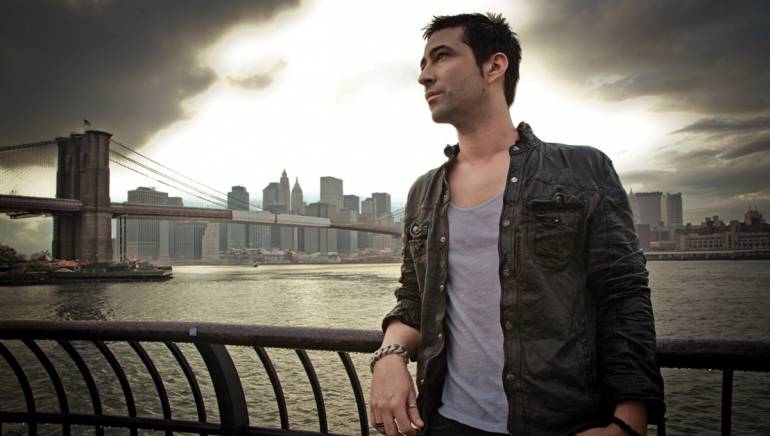 If renowned pop music producer Sandy Vee had come across his current job among the help wanted ads, it may have read something like this:

Major Duties and Responsibilities: Ideal candidate must basically know how to do everything and do it extremely well on a daily basis — including, but not limited to, producing, mixing and mastering pop songs that much of mankind will not be able to get out of their heads, at least not before compulsively downloading them and dancing maniacally around their living rooms. Must also be able to play the bejesus out of at least a half-dozen different instruments, and speak multiple languages, including pop-star-ese. Applicant needs to be as comfortable hunkering down in a studio alone as working with a team of producers; both scenarios must result in songs that climb the Billboard charts at a breakneck pace. Within first 12 months on the job, candidate will be required to hammer out hits for Rihanna, Katy Perry, Kelly Rowland, Akon, David Guetta, Britney Spears, The Black Eyed Peas and Shakira. Afterwards, Grammy nominations are expected to abound. Candidate must work 18-19 hours a day, seven days a week, traveling often, sleeping little, and doing pretty much nothing other than making trend-setting, record-busting pop songs.

Reading through Vee’s imaginary job description makes it easier to understand why there are so few producers molding the sound of American pop music these days. There’s no job application in the world with room enough for Vee to recount his successes, and no blueprint for the combination of lucky breaks and innate musical aptitude that has carried him this far. Vee got this job because he created this job.

Just one year ago, Vee moved to New York City from France, where he mostly masterminded dance music for French artists before a fortuitous meeting with top house producer David Guetta, for whom he produced 2009’s smash “Sexy Bitch” (which Vee pronounces “sessy beach” in a thick French accent). In the two years since “Sexy Bitch” “changed everything” for Vee, he’s earned two Grammys (Best Dance Recording for both mixing and producing Rihanna’s “Only Girl [In The World]” and two more Grammy nominations (Album of the Year for mixing and producing Katy Perry’s Teenage Dream). Despite the beyond-demanding workload, Vee’s enthusiasm for his craft remains sky-high, especially as he witnesses how his songs are altering the global appetite for pop music.

“Before ‘Sexy Bitch’ [pop music] wasn’t like this,” says Vee. “Now everything is about up-tempo dancey stuff. But I know that [in America] people also need melody, harmony, chord progression, songs you need to be able to sing, so I don’t trust in club music. [But] I love to put some stuff from the club music into the pop song, which I did with Rihanna and now [Katy Perry’s] ‘Firework.’”

There’s only one part of the songwriting and producing process that Sandy’s not yet an active participant in, and that’s lyric-writing.

“One year ago I didn’t speak a word of English, and it was very tough for me — very hard,” says Vee. “I worked very, very hard to learn my English in just one year.”

Vee applies that same determination in his quest for the next top 40 hit.

“I’m working 24/7,” says Vee. “In a day I can work 18, 19 hours a day. And by working with different writers and different people in the studio doing different kinds of music, I’ve got [a feel for what will work on] radio top 40. I can feel when something is strong… . Last week I spent one week with Shakira in a Miami studio. This one song, when the song comes on you have this feeling like, ‘Oh, that’s big. That’s big.’ I can feel that.”

Vee may have figured out a gut-feeling formula for the perfect pop song, but he says that it’s his passion and hard work that have taken him the farthest in the music industry.

“I’m someone who know what he wants, and I want to say that nothing can stop me,” says Vee. “I love the music so much, and I know where I want to go.”

Ellen Mallernee Barnes writes and lives in Nashville. Pay a visit to her daily blog at www.BlackAndWhiteAndLovedAllOver.com.