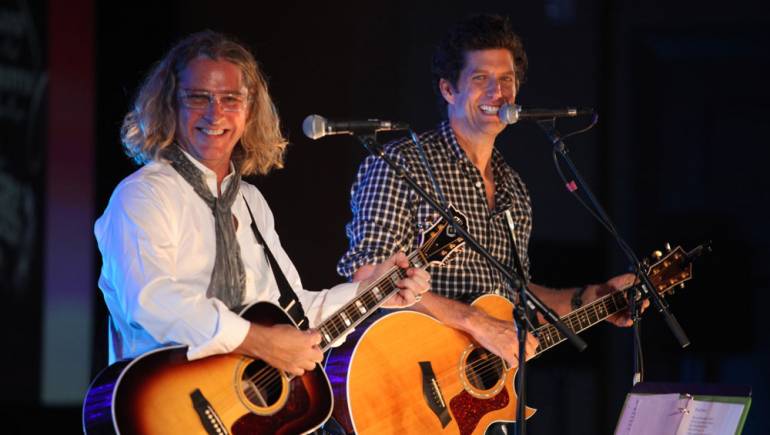 As front men for Better Than Ezra and Collective Soul, Kevin Griffin and Ed Roland helped create grunge’s alter-ego. The sunnier side of 90’s rock was built by Griffin-penned BTE hits such as “Good,” “Desperately Wanting,” “In the Blood,” and others, as well as Collective Soul’s “Shine,” “The World I Know,” “December,” and more, all written by Roland. The Southern-bred, radio-savvy old friends had thrown the idea of a joint tour around for years.

“Ed and I had talked idly about it,” Griffin says. “But musicians do that kind of talk all the time, and nothing ever comes of it.”

Then fate—dressed as BMI licensing executives Dan Spears and Mason Hunter—stepped in. BMI routinely invites songwriters to perform at conventions for restaurant associations, broadcasters, and other businesses, and while Griffin and Roland had performed individually at various events, a Cox Media conference in Orlando earlier this year provided the perfect opportunity for them to take the stage together for the first time. In addition to loving the idea of finally sharing a bill, both artists see the BMI shows as important opportunities.

“Once the creative process is over and you’ve got a recording, it’s as tangible as a chair or anything you can make,” Griffin says. “So when you have a songwriter up on stage in front of one of these restaurant groups or another group who BMI receives licensing royalties from, it really puts a face to these fees different companies are paying for the use of songs.”

The BMI/Cox Media show lit a fuse that was years in the making, and Griffin and Roland decided to embark on the Southern Gentlemen Tour, an eight-night acoustic run kicking off in New York City and ending in Athens, Georgia. Transitioning from full-band showmen to bare-bones acoustic warblers has proven to be a welcome challenge.

“When you’re playing acoustic in a room full of people, there’s nowhere to hide,” says Griffin. “It’s really the song that stands on its own.”

While he’s best known as the voice of BTE, Griffin has written songs for other artists, which are fair Southern Gentlemen game. “I always play ‘Collide,’ the Howie Day song, and I do my version of ‘Stuck Like Glue,’” he says. “I’m not Jennifer Nettles—I don’t sing quite as high. But I got some sass.”

“It’s kind of fun to play songs you don’t necessarily perform with your band, dig a little deeper into the catalog,” Roland adds from Boston after the tour’s successful first night in Manhattan. “Then, if I do play songs that people are used to, I like to showcase where those songs came from.

“My new band I’m working with is called the Sweet Tea Project,” he continues. “I threw one of those songs out there last night, and I’ve got one song I’m working on that no one’s ever heard, so I’ll probably throw that one out there. That’s the beauty of what we’re doing—it allows us to do whatever we want to do.”

In addition to the freedom and adrenaline rush fueled by a different performance setting, there’s another motive behind the pair’s extended road trip: writing more songs.

“The idea is really just to write out on the road together,” says Griffin. “Ed and I want it to be different than Better Than Ezra or Collective Soul—something fresh that neither one of us have covered in our own bands.

“I was always just a solo writer and had no desire to write with anybody else because I was the only songwriter in Better Than Ezra,” he continues. “The collaborating thing—being comfortable in it and really realizing the merits of it—has happened over time.” In addition to Day and Sugarland, he has written for an impressive array of artists, from Meatloaf to Blondie to American Idol champ David Cook.

For Roland, co-writing is a relatively new venture. “It’s a learning experience,” he says. “Kevin and I were talking about that last night. I’m still in that learning stage, but I’ve gotten a lot more confident. It’s like anything else—it takes time and effort and work.”

“If I think I’ve already written the best song I can write, why am I going to continue to write? I’m always searching for that song,” Roland says. “That perfect song, which isn’t out there, but that’s okay. It keeps me busy. Keeps me out of trouble.”