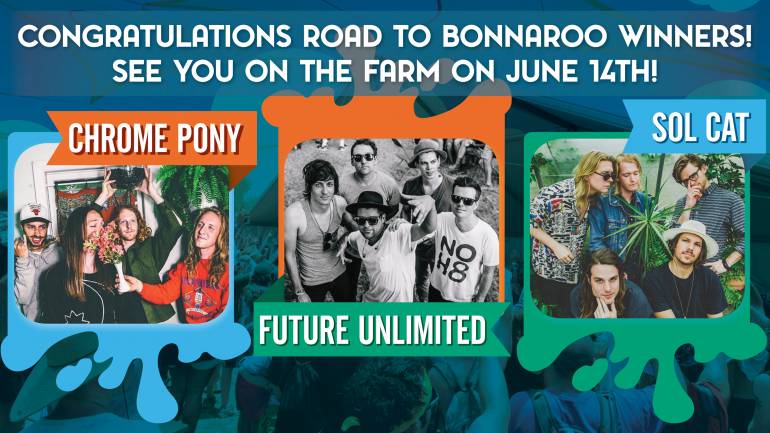 The Broadcast Music, Inc. Road to Bonnaroo winners have received their official performance slots from the Bonnaroo Music and Arts Festival. Officially announced April 22, 2015, the schedule puts the Road to Bonnaroo winners on the New Music on Tap Lounge Brewed by Miller Light, playing Sunday, June 14. Chrome Pony, whose latest EP, You Are The Pieces, is garage rock n’ roll perfection, will play from 1:15-2 p.m. Featuring brothers Tyler and Kyle Davis, on guitar and drums, respectively, Jota Ese on bass and Rick Allesio on organ, the band will bring searing guitar riffs and smart lyrics to the farm. They will be followed by Future Unlimited from 3-3:45 p.m. Made up of David Miller, Samuel D’Amelio, Matt McCord, Gabe Pigg and Jim O’Shea, the group’s synth-heavy pop-rock sounds will get the crowd moving. Finally, Brett Hammann, Johny Fisher, Jaan Cohan, Jeremy Clark and Tom Myers, who make up the indie rock outfit Sol Cat, will perform from 5-5:45 p.m. Sol Cat’s laid back rock sounds will be the perfect soundtrack for the late afternoon, especially their latest single “Fishin’ With John.” Congrats to all of our winners!

For the full lineup and ticket information, go to www.bonnaroo.com.