BMI has released its annual mobile music market revenue projections for 2009 and finalized its earlier figures for 2008, projecting that ringback tones will surpass $235 million in U.S. retail sales during calendar year 2009, up 15% from BMI’s 2008 market estimate of $205 million and 68% from BMI’s 2007 estimate of $140 million. A ringback tone is a musical work that is performed to the caller when they place a call to a participating mobile subscriber.

BMI’s study is based on comprehensive sales and use data it collects as part of its licensing agreements with its mobile music clients; this data reflects more than 215 million of the current 270 million-plus United States mobile subscribers. 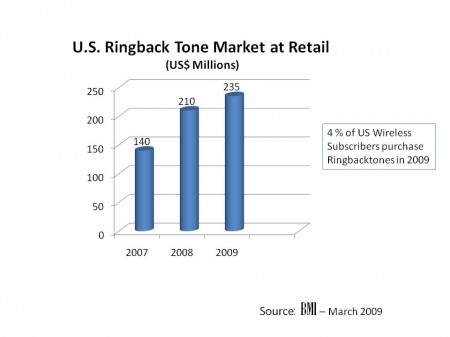 “We predict that ringback tones will hit a new high in 2009,” said Richard Conlon, Vice President, New Media & Strategic Development, BMI. “Mobile phones are a multi-format device and have become a distribution outlet for entertainment content for the consumer. The relationship with the mobile phone has transcended voice communication and the increase usage in music and audio-visual offerings illustrates that. Ringback tones’ revenues are growing as more subscribers sign up for and increase the number of tones in their libraries. It is a music use area that we see a continuing growth rate for.”

Ringback tones are sold by all major carriers and retail at prices between $1.99 and $2.50 per tone with the vast majority of tones selling at $1.99. The fee allows the subscriber to use the tone for anywhere from 90 days to 12 months. With only one exception, all major carriers require a monthly recurring subscription fee to the service, which is required before a subscriber can purchase a tone. The monthly recurring charge ranges from $.99 to $5.00. Carriers representing more than 75% of U.S. wireless subscribers offer the monthly subscription services at $.99 or less.

BMI tracks titles and revenues associated with the U.S. use of ringback tone services, streaming audio, and streaming audio/visual services. The company’s database of U.S. earnings and titles is believed to be the most comprehensive in the industry.