Posted in MusicWorld on June 1, 2012 by Ellen Mallernee Barnes 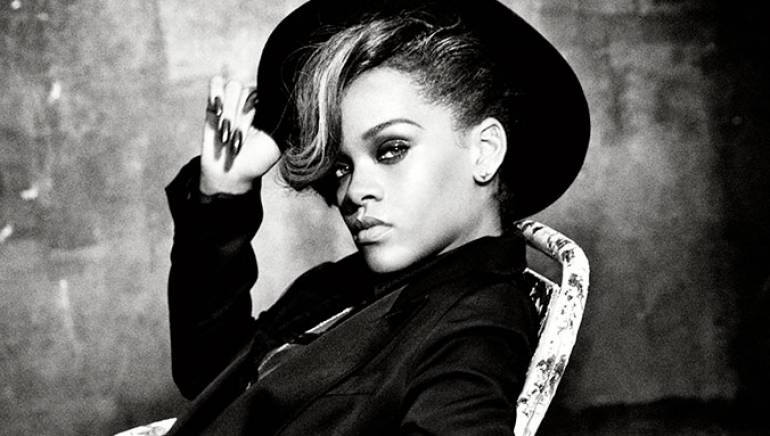 Like all epic stars, Rihanna cannot be captured or explained with lyric quotes, racy photos or tabloid headlines. The pieces of her public persona converge to create an image that is simultaneously larger than life and oddly intimate.

But isn’t this the essence of all great soul singers, from the sad beauty of Billie Holiday, to the defiant hard luck of Etta James? Rihanna sings the way she lives — unapologetic of who she is, where she comes from and where she’s going.

Born in Barbados, Rihanna left her Caribbean home for the U.S. at just 16. She signed a record deal almost immediately, and since then, she has released six albums in as many years, selling 30 million records, and charting 11 No. 1 hits in the U.S. Grammys and countless other industry accolades have documented her success along the way. She’s Esquire’s “Sexiest Woman Alive,” Armani’s spokeswoman, a runway model and a newly minted feature film actress debuting in the forthcoming Battleship.

Considering all Rihanna has accomplished makes it easy to forget she was once the young girl too star struck and nervous to look Jay-Z in the eyes. In 2005, nerves notwithstanding, Rihanna stunned the mogul with a rendition of Whitney Houston’s “For the Love of You” and her first single, “Pon de Replay,” and he refused to let her leave the Def Jam offices without signing her. Jay-Z has said, “I was absolutely certain [about her]. That doesn’t happen too often.”

Soon after Jay-Z took on Rihanna as his protégée, she released a flurry of hits that gave a stage to her distinct voice and Caribbean-tinged rhythms, and often featured superstar friends, including Kanye West and Eminem. “SOS,” “Umbrella,” “Don’t Stop the Music,” “Man Down,” “Only Girl in the World,” “Rude Boy,” “What’s My Name?,” “S&M,” “Run This Town,” “Love the Way You Lie,” “We Found Love,” “You Da One” and so many more have topped charts in the U.S. and around the world.

With each new hit, Rihanna refined her persona. Adult themes, sometimes dark and even disturbing, began to inform her inescapable pop songs. Even her album titles — Music of the Sun, A Girl Like Me, Good Girl Gone Bad, Rated R, Loud, and Talk That Talk — mirror her transformation from baby-faced ingénue into one of the most striking and powerful figures in music. In 2009, when news stories about her personal life threatened to eclipse her art, she retreated into her music and emerged with the complex and uncompromising Rated R.

Just as Rihanna appeared to step away from darker material and darker days — 2011’s Talk That Talk is her blithest album to date — she’s gone and done the most shocking thing yet by partnering with former boyfriend Chris Brown for a remix of her “Birthday Cake” single, which has almost nothing to do with birthdays but a whole lot to do with sex.

Like she did that day with Jay-Z, which seems lifetimes ago now, Rihanna’s provoked a reaction. This moment and all those that came before are writing future albums and future chapters of a career that seems destined to be written as iconic. She’s Rihanna: one name, like a brand or a best friend.

“I used to worry a lot about [being a role model],” Rihanna recently said on The Ellen DeGeneres Show. “Then I realized the message I really want to send is not perfection; it’s individuality. It’s being who you really are, knowing who you really are and being just that. Because there’s only one of you, so why not be that?”