Posted in MusicWorld on August 20, 2008 by Rob Patterson 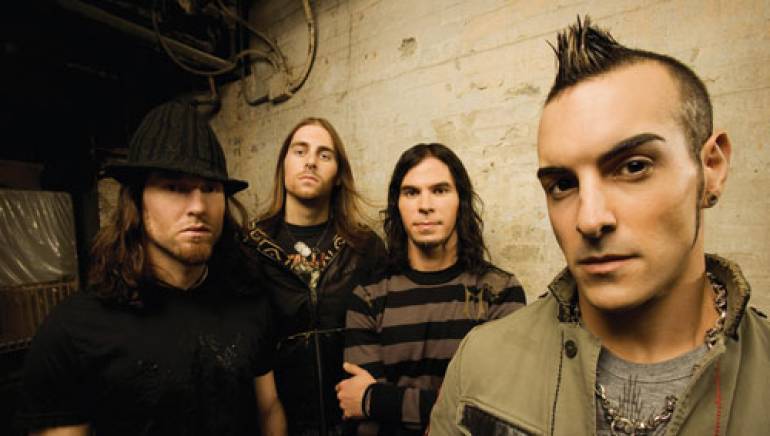 Rev Theory is a hard-rock band with a promotional savvy that has worked well for them. In 2005, as a still-aspiring band, they crossed the nation on the “Girls Gone Wild” tour. Their songs “Light It Up” and “Hell Yeah” have become official theme music for World Wrestling Entertainment, and the latter has also become the musical intro for the Detroit Red Wings hockey team. They also wrote their song “Voices” for WWE star wrestler Randy Orton.

Those affiliations as well as tours with =Fall Out Boy, Hinder, Buckcherry, Papa Roach and others have made the band rising stars on today’s alternative metal scene. Originally known as Revelation Theory, the group began in North Andover, MA, where singer Rich Luzzi, guitarist Julien Jorgensen and drummer Dave Agoglia all attended Merrimack College. After graduation in 2001, they relocated to New York City to pursue their rock music ambitions.

A six-song demo that was released as an EP in 2004 started garnering Rev Theory attention and helped them win a deal with the EMI distributed Element Records. Their 2005 debut album, Truth Is Currency — produced by Grammy winner Paul Ebersold, know for his work with 3 Doors Down and Saliva — was released under the longer Revelation Theory name. A switch to Interscope Records for the recently released Light It Up — this time with producer Josh Abraham, whose credits include Limp Bizkit, Staind, Velvet Revolver and Slayer — found their moniker pared down to Rev Theory.

The group’s singles have hit the upper reaches of the Mainstream Rock chart, proving that these devoted hard rockers have an allure that sets them apart from much of today’s metal music. “We are not mainstream radio, but we do have a commercial appeal,” says Luzzi. “I honestly think we have a unique sound. It’s hard rock with melancholic sound.”