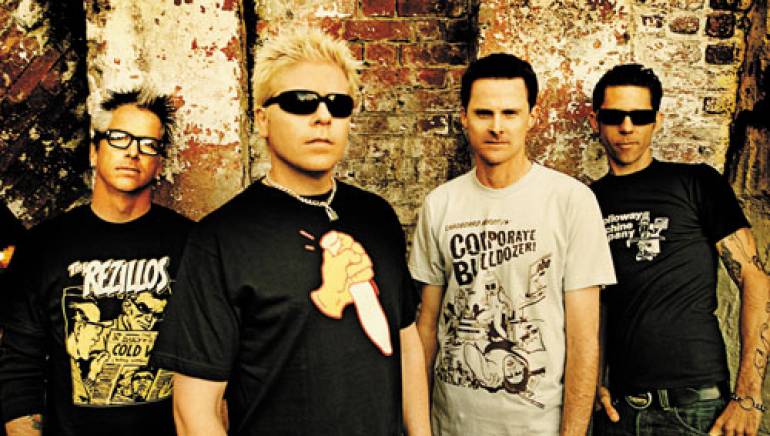 Since its emergence in the 1950s, rock & roll has demonstrated a lamentable tendency to stray from its mischievous founding principles, only to wash ashore on the perilous sands of self-importance. Such was the case in 1994 when radio listeners began complaining of grunge overload. The stage was set for the Offspring, who helped restore rock’s dauntless spirit while celebrating the highs and lows of growing up in millennial America.

The California foursome’s ethos is amply displayed on the 1994 album Smash and its breakthrough single “Come Out and Play.” Authoritatively sung by Dexter Holland, the song boasts lyrics that capture the exhilaration and death-defying foolishness of juvenile delinquency: ”They’re like the latest fashion/They’re like a spreading disease/The kids are strappin’ on their way to the classroom/Getting weapons with the greatest of ease.” Holland’s performance is offset by guitarist Kevin “Noodles” Wasserman, who coaxes loopy Middle Eastern melodies from his instrument like a punk-rock snake charmer.

“Come Out and Play” rocketed to no. 1 on Billboard’s Mainstream Rock Tracks chart, easing the way for subsequent Offspring hits including “Self Esteem,” “Gotta Get Away” and “Bad Habit.” Smash sold a remarkable 14 million copies worldwide, the record for most album units sold by an indie label band.

“Come Out and Play” surfaced just as gangsta rap was rising into the mainstream from the urban underground. With its ambiguous mix of gang-banger lyrics and punk absurdism, the single seemed to herald the arrival of a prophetic new force in rock & roll.

The Offspring continue to cast a puckish eye on western youth culture. On albums Ixnay on the Hombre, Americana, Conspiracy of One and Splinter, the band has explored topics including machismo (“Hit That“), societal decay (“Americana,” “LAPD“) and the mainstream appropriation of black culture (“Pretty Fly [for a White Guy]”).

Over the course of its 20-year history, the group has released seven studio albums, one compilation, three EPs and three DVDs, selling more than 32 million records worldwide. One of history’s best-selling punk acts, the Offspring seized the torch lighted by fearless post-Zeppelin visionaries including the Ramones, Sex Pistols and Dead Kennedys.

Frontman Dexter Holland may be the Offspring’s secret weapon. His blowtorch vocals toe the line between Johnny Rotten snarling and Steve Tyler-inflected bombast. “Self Esteem,” “Pretty Fly (for a White Guy),” “Hit That” and other Holland-penned tunes combine punk attitude with pop, classic rock, reggae and ska.

Named valedictorian of his high-school class, Holland earned a master’s degree in molecular biology from the University of Southern California. Though he cites seminal punk bands Social Distortion and the Dead Kennedys as influences, Holland also professes a soft spot for legends including The Beatles and Bob Dylan.

His intellect and broad musical tastes help explain his sly songwriting style, but the singer firmly insists he doesn’t pander. “If I don’t sell three million records, I’m going to commit suicide?” Holland quipped during a 1998 Rolling Stone interview. “You can’t second-guess what the audience might say…if you try to gear your writing toward that, you’re truly lost.”

Holland’s philosophy has paid off handsomely. In addition to leading the Offspring, he and bandmate Greg Kriesel are founders of Nitro Records. Driven by passion, not market research, the California indie label has championed punk acts including the Vandals and Guttermouth, along with progressive group AFI.

Lately, the Offspring have been sequestered in the studio recording their eighth studio album with producer Bob Rock (Metallica, Aerosmith, Bon Jovi). One may confidently surmise that the band’s forthcoming recording will rock — without taking itself too seriously.