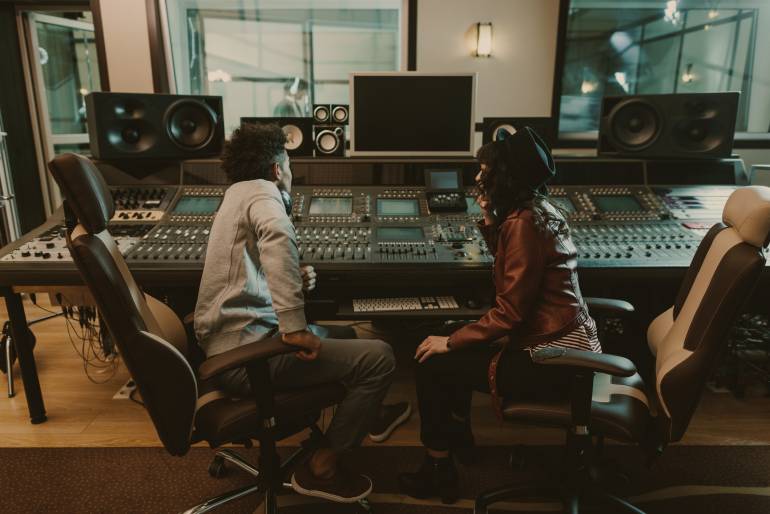 I recently attended a panel discussion at the Hawaii Songwriting Festival where songwriters, recording artists, and producers shared the elements they hope each other will bring in order to produce the most effective recordings. Here are some of the skills and talents that were discussed.

One of the most important things a producer can contribute is his or her ability to record each instrument and vocal in a way that helps create the sound the producer and artist envisions for the project. This requires choosing the right studios, the best microphones, and the ideal microphone placement. It also necessitates employing audio engineers who are skilled at finding the volume levels, EQ, reverb, delay, preamps, and additional effects to capture the desired sound. Additionally, the producer brings his or her expertise to overseeing the mixing and mastering processes.

Ken Caillat (producer and/or engineer for seminal albums by artists including Frank Sinatra, Joni Mitchell, the Beach Boys, Herbie Hancock, Alice Cooper, and many more) stated that before a note was recorded on Fleetwood Mac’s GRAMMY-winning album of the year, Rumours, he worked for a week-and-a-half to create the sounds he sought for each instrument and vocal track. The drums were tuned every day so they would sound the same from one take to the next.

In many cases, hip-hop songs have more than one producer, with each one being a specialist in his or her area of expertise. In these instances, one producer is solely responsible for creating the latest, cutting edge beats—the drum and percussion sounds that are so critical in that genre.

Without songs that connect with listeners’ hearts it won’t matter how good a recording sounds. Ideally, a producer has both the “ears” and connections to ensure the artist’s songs are as strong as they need to be. If the artist or band writes their own material, the producer chooses the songs he or she thinks are the strongest. For those who do not write their own songs, the producer seeks and reviews songs from publishers, songwriters, and (for artists signed to a record label) from A & R. In some instances, the producer might request song revisions and collaborations.

Producers help create song arrangements by choosing the instrumentation (i.e., whether guitars, keyboards, strings, or other sounds will be used). Their decisions about when to bring in those instruments, and when to have them drop out, as well as how to start and finish the song are crucial components of hits.

Finding and Expressing the Heart of the Artist

A producer’s contribution helps carve out an artist’s signature sound and musical identity. In cases where a band is not self-contained, the producer typically hires the musicians and background vocalists (if applicable) choosing those that are most likely to be able to create the sound the producer and artist hope to achieve. The producer might also help the artist and/or studio musicians craft and develop their parts.

Being able to coax the very best performance out of an artist is a unique and exceptionally important skill for a producer to possess. They need to be able to create an environment in which an artist feels safe to be vulnerable and explore—and expand—his or her artistic boundaries.

Having the perfect tempo and key are crucial components to a great recording, and these are determined by a song’s producer. The only way to find those sweet spots is by auditioning various tempos and keys. One producer told me he always listens to faster and slower versions of his tracks before determining where the tempo feels best. He also asks the artist to sing the vocal in up to five different keys before committing to a tempo and key. Ken Caillat shared that almost every song on Rumours was sped by .7 percent after it was recorded.

Even on a demo, I often speed or slow the finished recording by a small percentage to find that perfect “pocket” that I might have missed during the initial recording process.

What Writers and Artists Contribute

It goes without saying that the most important thing an artist can contribute is their best performance. The artist needs to bring a clearly defined identity, a distinctive vocal, and an ability to sing in time and on pitch. This might require their taking vocal and/or performance lessons, as well as a willingness to go to any lengths, and take as long as needed, to achieve the most compelling performance they are capable of.

If the writers include a track producer (as is often the case in hip-hop and some styles of pop music) this person needs to provide the latest sonic and drum trends. Sounds that are in vogue are constantly changing.

In addition to having a unique, distinctive voice and identity, artists need to deliver material that stands out from the competition. This can be achieved by including stand-out melodies; songs that are laden with hooks; lyrics that include fresh, new approaches and the newest words and phrases; catchy instrumental licks; and more.

One of a producer’s most important abilities is knowing who to hire—and one of an artist’s most important skills is hiring the right producer. The relationship between producers and writers/artists is symbiotic. Just as the writer relies on the producer to capture the latest and best sounds for each instrument and vocal track, the best key, arrangement, and tempo, the producer needs the writers to deliver the songs and the artists to bring the performances that will move listeners. When all parties bring their best—the magic happens!