Posted in MusicWorld on September 3, 2008 by Kevin Zimmerman 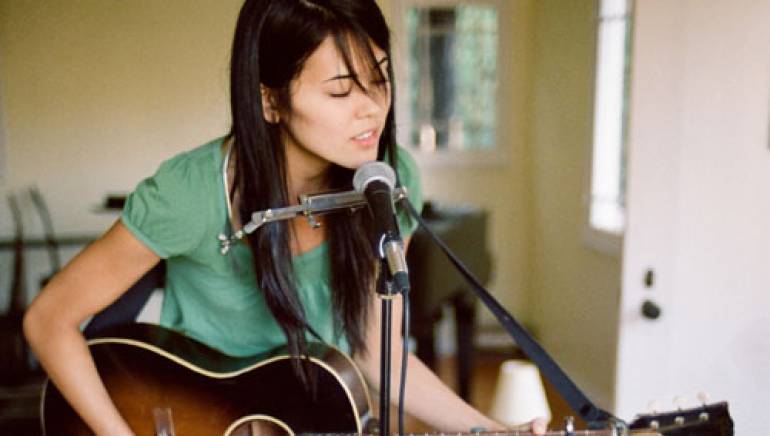 Crystal-voiced singer/songwriter Priscilla Ahn strikes most listeners as an old soul. The fact that she’s just released her debut album, A Good Day, on noted jazz label Blue Note is indicative of the care she’s taken in penning a set of songs that are at once both breezy and sophisticated, topped off by her warm, welcoming voice.

She also pretty much embarked upon her musical career the old-fashioned way: by packing her belongings in a car (“two guitars, clothes, and some other junk I really didn’t need to bring,” she says) and left her Philadelphia home to make it big in Los Angeles. Fast-forward several waitressing months, and, by playing a steady set of gigs around town, she soon landed that record deal.

But Ahn says that her formative experiences read better than they actually were.

“My songs were coming out jaded and cynical,” she says of her waitressing period. “I was doing a lot of open mikes here and then I sort of stopped doing them because I had to get a job. The job just left me really depleted and it wasn’t something I loved to do. So I seriously considered going to school for teaching or something, and a friend of mine was a Godsend. He was like, ‘You have to persevere.’ I’ll never forget that because it really made me stay on and it gave me some sort of hope and confidence in what I’m doing.”

A month later, after opening for fellow singer/songwriter Josh Radin, she was invited to join his group. That, in turn, led to a visit to a recording studio where Blue Note artist Amos Lee was recording his first EP. Ahn managed to secure an internship at the studio, which, she says, really meant “hanging out with them and watching someone so talented recording.”

While still performing with Radin, Ahn met drummer and producer Joey Waronker (Beck, R.E.M.), who helped record the songs for her self-titled 2006 EP; two of its strongest numbers, “Dream” and “I Don’t Think So,” have been revamped for the album. Not long after, Blue Note came calling.

“I heard through the grapevine that Amos was always telling people at Blue Note to keep tabs on me,” she recalls. “Amos’s a&r guy came out to see me and then I agreed to do a showcase for the company. I flew in to New York City and it went really well. I’d met with other record companies but that was never what I really cared about it. I just wanted to do my music. But I often said if I were to choose any record label it would be Blue Note because I thought they would ‘get’ me. So I was very happy when it really happened.”

Her career is now in full flight. “Dream” was featured on the soundtrack album for last year’s hit film Disturbia, and Ahn performed the song on The Tonight Show with Jay Leno. The rest of this year will be spent touring behind A Good Day.

“I’m really proud of [the album],” she says. “I’m really happy with the way it came out. I think it’s quirky and fun and says a lot of different things.”