Posted in MusicWorld on December 29, 2009 by Dan Kimpel 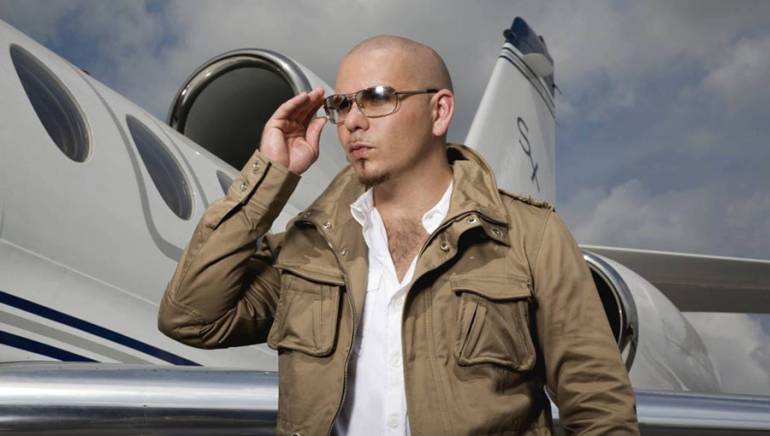 Yes, his bite is as big and as bad as his bark: With incendiary lyricism and blazing beats, Pitbull has become one of the most recognizable names in modern hip-hop. Now, with his new full-length, Rebelution, the Miami-based artist, born Armando Christian Pérez, is continuing his global domination. And a roster of hit-makers including producer Jim Jonsin, Lil Jon, Collipark, Play-N-Skillz and Drop, Akon, Pharrell, T.I., Daddy, Jackie O. and Jennifer Lopez are all onboard as he pumps up the beat.

When his label, TVT Records, went under last year, Pitbull was an artist with options. “It was a blessing,” he revealed in a recent interview. “It feels like I went through four years of the school of hard knocks and learned from it. I sat back, studied and learned, and when it was my time to strike, I did.” First, his Lil Jon-joined track “Krazy,” along with “Blanco,” buoyed promotions for the film Fast & Furious; both are included on the soundtrack.

Next, “I Know You Want Me (Calle Ocho),” a rhythmic confection of Euro-dance and reggaetón, gained massive exposure through the hit Fox TV show So You Think You Can Dance. It subsequently peaked at #2 on the Billboard Hot 100 and sold 1.7 million downloads, becoming Pitbull’s most successful single to date. The song is also a compositional rarity of sorts: “Calle Ocho,” co-written by Pitbull, repeatedly features the same infectious horn walk-down used in the tune “75 Brazil Street,” which, in turn, borrowed the instrumental hook from “Street Player,” co-written by BMI songwriter Hawk Wolinski. Through its unconventional make-up, the song both underscores Pitbull’s resourcefulness and further exposes music’s infinite shelf life.

It’s not just his music that makes Pitbull so recognizable: He also stars in his own television show, La Esquina, now in its second season on the network mun2. He launched a record imprint, Mr. 305 Inc., with Polo Grounds/RCA/Jive label group, as well as a charitable effort called Imaginate Foundation to help Latinos and immigrants pay for college. The city of Miami recently honored him with the key to the city he reps, and Pitbull worked with fellow Floridian T-Pain to record a new theme song for the Miami Dolphins.

A thread of narration on Rebelution takes listeners on a Pitbull-guided tour of Miami, with the up-tempo grooves representing the glittering nightlife playground of South Beach, and subsequent tracks revealing the diverse characteristics of the city’s other neighborhoods. “It’s a way to further show how I’ve been raised in Miami and why I have so many different musical influences,” says Pitbull.

Born to Cuban exiles, Pitbull grew up with both the writings of Cuban poet Jose Marti, which his parents made him memorize, and the early underground rumblings of rap. After meeting Lil John and the Eastside Boyz, he joined them for Kings of Crunk. “Oye,” a Pitbull track featured in film 2 Fast 2 Furious, and a series of popular mix tapes followed.

Pitbull unleashed his debut full-length, M.I.A.M.I., in 2004 on the TVT label with the Lil Jon-produced single “Culo.” Soon Pitbull was making guest appearances on tracks by everyone from the Ying Yang Twins to Elephant Man. Collaborations became a Pitbull trademark, as he worked with artists ranging from Olga Tañon to Carlos Ponce, Wyclef Jean to DJ Khaled. The 2005 compilation Money Is Still a Major Issue collected the best of these collaborations, along with some remixes and unreleased tracks. The Anger Management Tour, with Eminem and 50 Cent, sealed his reputation as a full-scale concert artist. In 2006, the single “Bojangles” prepared fans for his next concept, El Mariel, a politically themed release. Pitbull’s third album, The Boatlift, was released in November 2007.

Concepts and themes continue to propel the music. As Rebelution accelerates through the contrasting neighborhoods of Miami and the infectious single “Hotel Room Service” beckons with a non-stop party, there is an underlying philosophy. The title, Pitbull explains, is a reference to conflicts within his family and also to the turmoil in his parents’ homeland. “The word revolution is a strong word,” he says. “And the word rebel is powerful. Because you’re looking for change, that’s what revolution is, but when you’re a rebel in it, you’re fighting for that change. I feel like I’ve been fighting in music and creating new ways and new opportunities to make things work.”