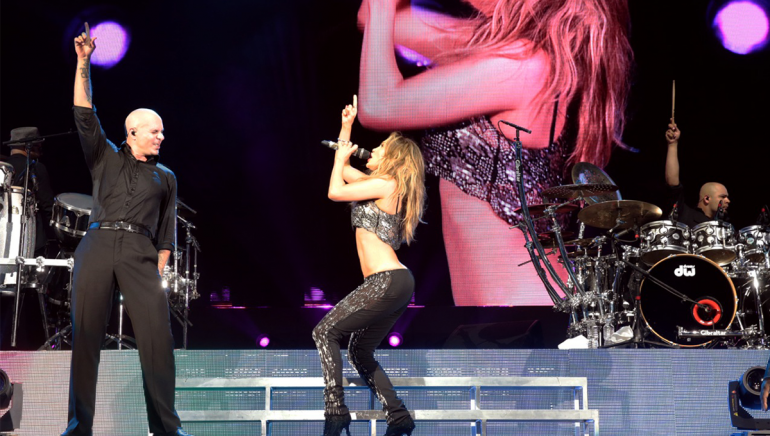 Pitbull brings out fellow BMI member Jennifer Lopez for a duet of their hit "Live It Up" during his concert at the Hollywood Bowl in Los Angeles. Photo: @Pitbull

It was a memorable night at the Hollywood Bowl in Los Angeles on June 18, 2013, as BMI global superstar Pitbull delivered his signature brand of feel-good dance music to a sold-out, all-ages crowd. Mr. Worldwide, who pointed out that Los Angeles has been his No. 1 market in the United States since 2003, brought onstage fellow BMI members Chris Brown and Jennifer Lopez, among other special guests, for duets of some of his biggest hits. The nearly two-hour set, which charted the Cuban-American superstar’s rise to the top from his humble beginnings in Miami, offered vintage cuts such as “Culo” and “Mentirosa,” as well as more recent hits such as “Give Me Everything” and “Feel This Moment.” In between songs, Pitbull opened up to the crowd by saying, “People ask me why I don’t rap about the streets anymore and I tell them, ‘I rapped to get out the streets not to stay in the streets.’ People ask why I switched to suits and I say, ‘Suits show growth, maturity and evolution.’ So we’re going to keep on doing what we’re doing because music is the most powerful thing in the world.” Opening up for Pitbull was fellow BMI member Kesha.