Posted in MusicWorld on May 14, 2009 by Ernest Barteldes 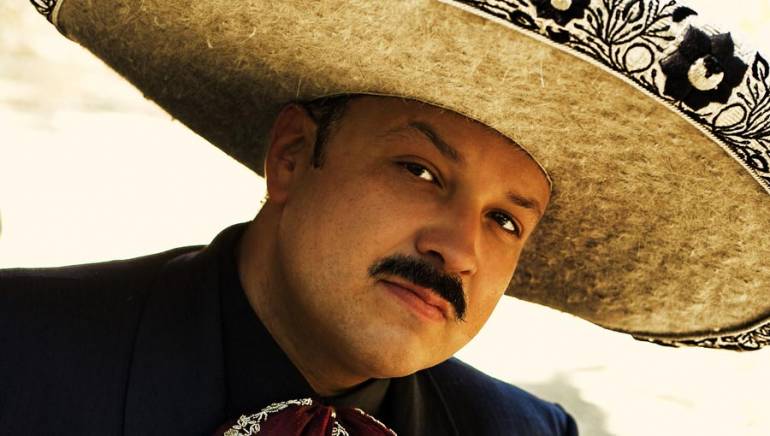 In the tradition of ranchera music, singers don’t usually write their own songs – legendary names like Javier Solis, Jorge Negrete and Lola Beltrán have always relied on songwriters to provide them with material, and early in his career in that genre, Texas-born (but Mexican-raised) Pepe Aguilar wasn’t different, even though he had been composing his own tunes since he started out in a rock band during his mid to late teens.

“Ranchera singers don’t have to write songs, but they do have to sing very well,” Aguilar said over a recent phone interview. “I realized that my biggest, greatest idols sang like angels but had never written a word of it. My dad (the late Antonio Aguilar) was the same, and then I saw Vicente Fernandez, and Pedro Infante, [it was] the same thing – I noticed that it was about using your vocal abilities and not so much about writing, and so I stopped completely, 100% cold turkey, and completely dedicated myself to just singing. I worked that way for a long period of time, and that’s when I met a whole bunch of writers that are now my very, very good friends and who have a history of writing specifically for me.”

However, after over a decade of touring and recording, he realized that he was still a songwriter at heart. “About eight years ago it all changed, because I thought, ‘I have to keep on writing, I have to keep on singing,’ so I started placing my own songs in my albums again,” he explained. “[On] every disc, I put more of my songs, and eventually my goal was to – again – be the writer of my whole album.”

Aguilar says that he doesn’t keep a routine when writing his music. “Inspiration comes almost instantaneously - you can’t plan inspiration, although you can plan at times to work on a song; you have to be really aware of what is around you, and be sensitive about what moves you, which can be anything.”

With no specific shtick at hand, he has to be ready to go whenever the muse strikes. “Sometimes I’ll be inspired and will do something with a piano,” he says. “I try to be with my gear available at all times. I also collect a lot of guitars, and I [always] travel with my computer.”

“I do not have a routine because I think it’s boring. Though I do respect people that have one, that doesn’t work for me. I have a method, I have a system, but not a routine.”

In his early years, the progressive rock of groups like Pink Floyd and Yes were a source of inspiration for him, but even after years in the ranchera business, that influence has not completely abandoned him. “I grew up listening to my dad and all those big names active in the business of traditional Mexican ranchera environment, but at the same time, traveling around the world listening to rock and jazz and bands like Pink Floyd really informed me,” he says. “I’m always inspired by rock. I keep on being inspired by that and by traditional Mexican music – one cannot fight with the other.”