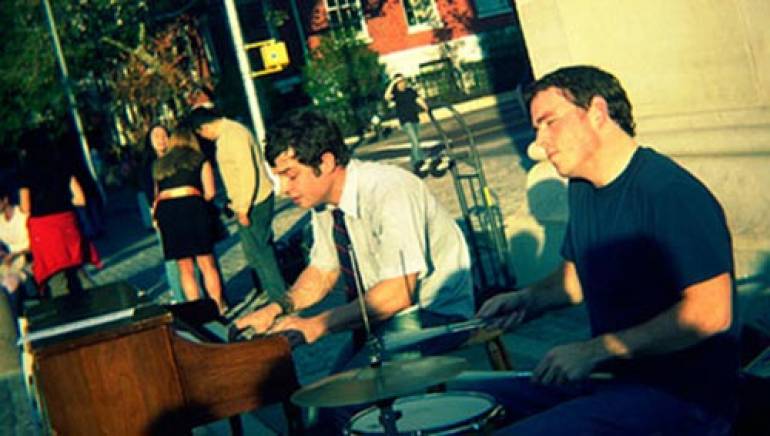 Pop, punk, country, emo, indie, blah blah blah.  How do you describe the music of worldofotis?  It’s like trying to describe an emotion.  It’s happy, it’s sad, it’s carefree, it’s raw.  It’s the whimsical nature of the Flaming Lips, mixed with the melancholy of Coldplay.  They convey what they believe:  life isn’t always easy, but don’t take it too seriously.

The band itself is made up of Jesse Gage (piano and vocals) and Craig Myer (drums).  Jesse was raised by a hippy mom in London and then Cape Cod, Massachusetts.  He began playing classical piano at age 7 and took lessons until age 14.  Craig, who was born and raised in New Jersey, comes from a long line of drummers.  His grandfather, father and older brother were all drummers.  The man was born with rhythm.

Jesse hooked up with Craig about two and a half years ago in New York City.  When they met, Jesse was playing piano in the local clubs with an old record player as accompaniment.  The two added bass and a guitarist and spent about a year and a half playing as a four piece.  And then last summer, Craig and Jesse began playing on the weekends in Washington Square Park in Greenwhich Village.  They would wheel out an acoustic 64 key piano and a small jazz drum kit.  Over the course of 3 months, the duo sold thousands of cd’s while playing weekends in the park.

Recently, the band began working with producer Tony Bruno and lawyer Nick Ferrara and became affiliated with BMI.  They reassembled the four piece set up, and are in the process of getting ready to cut a full length record.